Under the travel ban, some UMD students from Iran haven’t seen their families in years 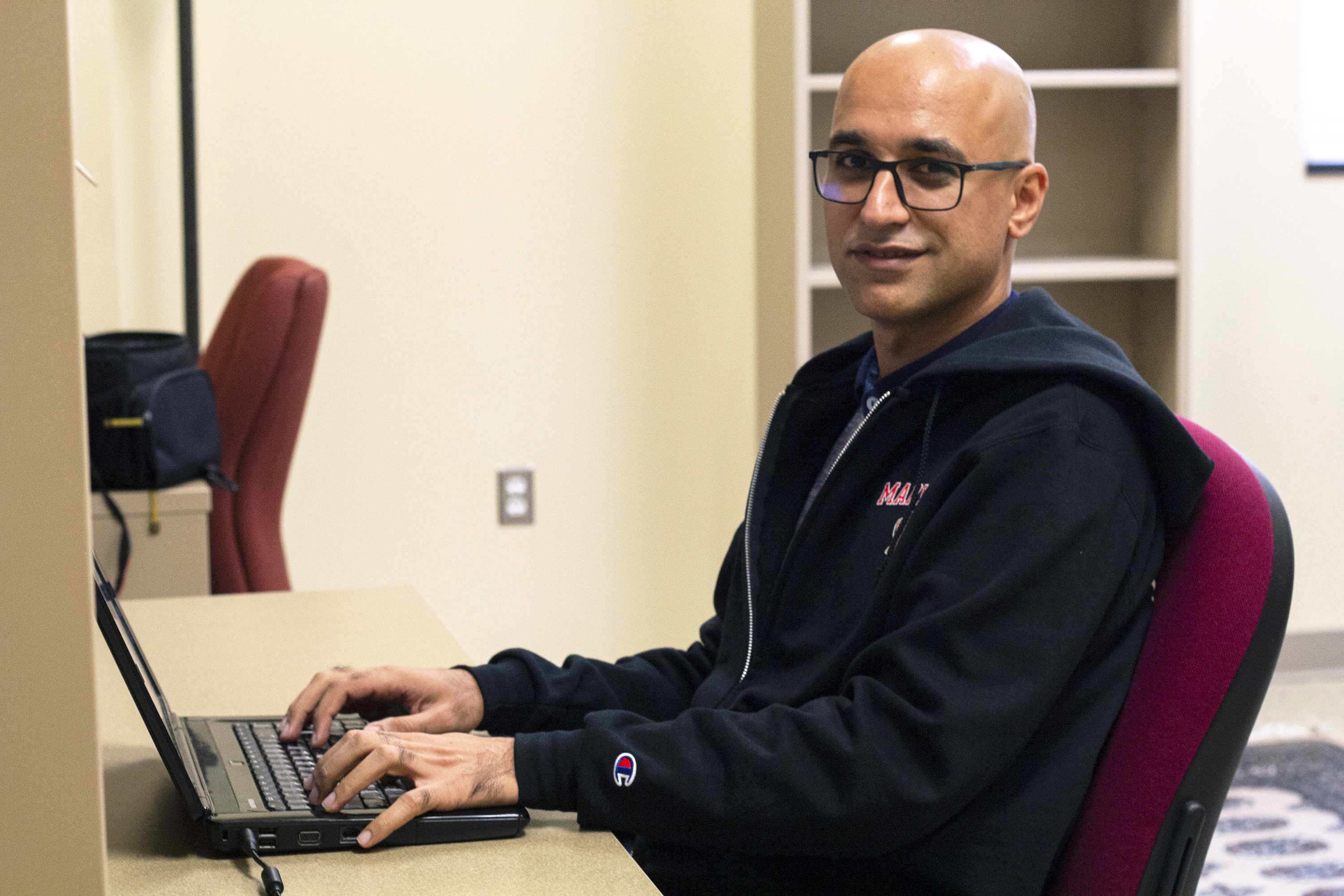 With her family an ocean away, University of Maryland student Ghazal Arabi Darreh Dor is missing all kinds of things: a sister’s engagement, another sister’s surgery, her mother’s stint in the hospital.

She hasn’t seen her siblings in ages, but she doesn’t dare travel home to Iran to visit out of fear she won’t be allowed back into the United States.

The country is over 6,000 miles and a 14-hour flight away from College Park. But for international students at this university who call Iran home — of whom there were 88 last year, according to the Institutional Research, Planning and Assessment office — it’s also years away.

More than a year after the Supreme Court upheld President Donald Trump’s travel ban, Iranian students continue to struggle. The increasingly stringent and unpredictable visa application process leaves many in the dark, unsure when they’ll be able to return home.

Iranians like Arabi Darreh Dor, who want to study in the U.S., often have to leave their families behind indefinitely to do so. The situation has many members of Iranian community at this university homesick and struggling, she said, despite her attempts to ease their pain by bringing them together for cultural events and holiday celebrations.

“You’re going to have to choose between building a better life for yourself and your family,” she said, “or going back [to see] them.”

Iran is among the countries most severely affected by the Trump administration’s travel ban — an executive order that bars most travelers from Iran and six other mostly Muslim-majority countries from entering America — because it sends thousands of students to the U.S. every year, according to reporting by the New York Times.

The executive order claims to ensure foreigners entering the U.S. have no connections to terrorism and don’t pose a national security risk. Organizations, activists and lawmakers almost immediately challenged it in court, though, decrying it as discriminatory. Since then, it has been temporarily suspended multiple times — but the Supreme Court ultimately upheld it in June 2018.

Iranian students have never had an easy time getting in and out of the the country — the strictness of U.S. policies tends to ebb and flow with the administration’s relationship with the Iranian government. According to the country’s Virtual Embassy for Iran, single-entry visas are the norm, given that the U.S. has designated it as a state sponsor of terrorism.

And in September, the visas of at least a dozen Iranian students headed to American universities were cancelled at the last minute, without explanation, the Times reported.

Of those who apply for waivers under the ban, only about two percent receive them, according to a letter the State Department sent to Maryland Sen. Chris Van Hollen in 2018.

“What makes us angry is that we haven’t done anything, but we’re treated like criminals,” said English doctoral student Mehdy Payam, who began his doctoral studies at this university in August.

These policies can make the U.S. seem unwelcoming to international students, Ross Lewin, associate vice president of the office of international affairs, acknowledged in a statement.

“Across higher education, we see the difficulties the travel ban Executive Order presents to all current and potential international students, both from Iran and elsewhere,” Lewin wrote. “We remain committed to our international students and are working diligently to help mitigate some of the challenges they are experiencing — whether they’re legal, emotional or academic.”

The visa application process can easily rack up costs, Payam said. Some people sell their cars or houses in the hopes of making it to the U.S.

Even if they do obtain a visa, most Iranians are issued single-entry ones — essentially a one-way ticket. A student’s commitment to studying in America, then, becomes a commitment to not seeing their family again for several years.

Some people, though, take the risk. In 2014, Arabi Darreh Dor’s friend Farhad Saffaraval, who was doctoral student at this university, left the country to see his family for the first time in five years.

“You can maybe take it for like, two to three years,” Saffaraval said. “But when it comes to five to six years, at some point you say: ‘Enough. I’m just going to go back.’”

His family met up in Canada, where they were in the process of obtaining permanent residency. Seeing family again after years apart, Saffaraval said, can be heartbreaking in a way. There’s a Persian expression he uses to describe it: مثل آتش زیر خاکستر. Like fire under ashes.

When you’re in the U.S., caught up with the pace of everyday life, you start to forget how hard it is to be so far away, Saffaraval said. You’re distracted from the emotion of it — like ashes covering a burning fire.

“When you go and visit them, those ashes went away,” Saffaraval said. “The fire is still there.”

Just sitting around the house watching movies together was his favorite part of seeing them again, he said. And because he hadn’t returned to Iran, he thought he’d be able to reenter the U.S. without an issue.

A month passed. His family returned to Iran, but Saffaraval’s visa still wasn’t approved — and wouldn’t be for another four months.

He scrambled to find temporary housing and a job at Starbucks during a Canadian winter, balancing reaching out to congressmen for help with his work as an online teaching assistant for a fluid mechanics class at this university. He was supposed to serve as a research assistant, but could only grade papers from where he was stuck — hundreds of miles away.

At one point, Saffaraval lost his wallet and had no money or identification. At another point, he was sick for three weeks with a bad fever and rash, but was never diagnosed. He couldn’t see a doctor because he didn’t have insurance, he said.

For the first few months, he woke up early every morning to frantically check his email for news from the embassy.

“It’s like being in limbo,” Saffaraval said. “The uncertainty makes it very distressing.”

Saffaraval missed a semester, but his visa was eventually approved — he returned to this university in 2015, and finished his doctorate in mechanical engineering.

He recently got his green card, and was able to go back to Iran in 2018 — a year after Trump’s travel ban was announced. It was Saffaraval’s second time seeing his immediate family in a decade, and the first time seeing his grandparents, aunts and uncles.

Finally, Saffaraval said, he feels like he has a country again. And ultimately, he says it was worth it — he is now helping to support his sister, who’s studying in Chicago. She’s much more hardworking than him, he says, and has a bright future — but he knows she probably wouldn’t have come to the U.S. if he wasn’t already there.

But in other cases, a student may never return to the U.S. Some wait for their visa to be processed for several months, but are ultimately rejected.

Even if students get a multiple-entry visa, the ability to go in and out of the country eventually expires. Eventually, almost everyone ends up in limbo, Arabi Darreh Dor said.

Arabi Darreh Dor is the president of the Iranian Graduate Student Foundation, which holds cultural events throughout the year to make Iranian students feel more at home.

Some Iranian holidays, like Shab-e Yalda, are especially hard. Held on winter solstice — the longest night of the year — Yalda is traditionally spent surrounded by friends and family. The foundation tries to ease any loneliness by hosting a celebration on campus.

The original plan was for Arabi Darreh Dor to return around now, halfway through her program, to visit her family. But after seeing and hearing what her friends have gone through, she’s too afraid.

Her mother was able to visit College Park on a tourist visa shortly after Arabi Darreh Dor moved to the U.S. It’s been two and a half years since she’s seen most of her five siblings — her  little sister was denied a visa because of the travel ban. It’s unclear what threat the U.S. government thought her 12-year-old sister posed, Arabi Darreh Dor said.

Still, she doesn’t want anyone’s pity. She’s proud of her family, their strength and their love for one another, despite their situation. Arabi Darreh Dor said she and her mom have always been a team. Her father died when she was 4, so they’re used to toughing things out together.

But that’s hard when you’re half a world away.

“I was always, and still am, the person that is there for their siblings,” Arabi Darreh Dor said. “Not being able to be with your family in those hard moments, and also those joyful moments, that’s the part that I’m really missing.”