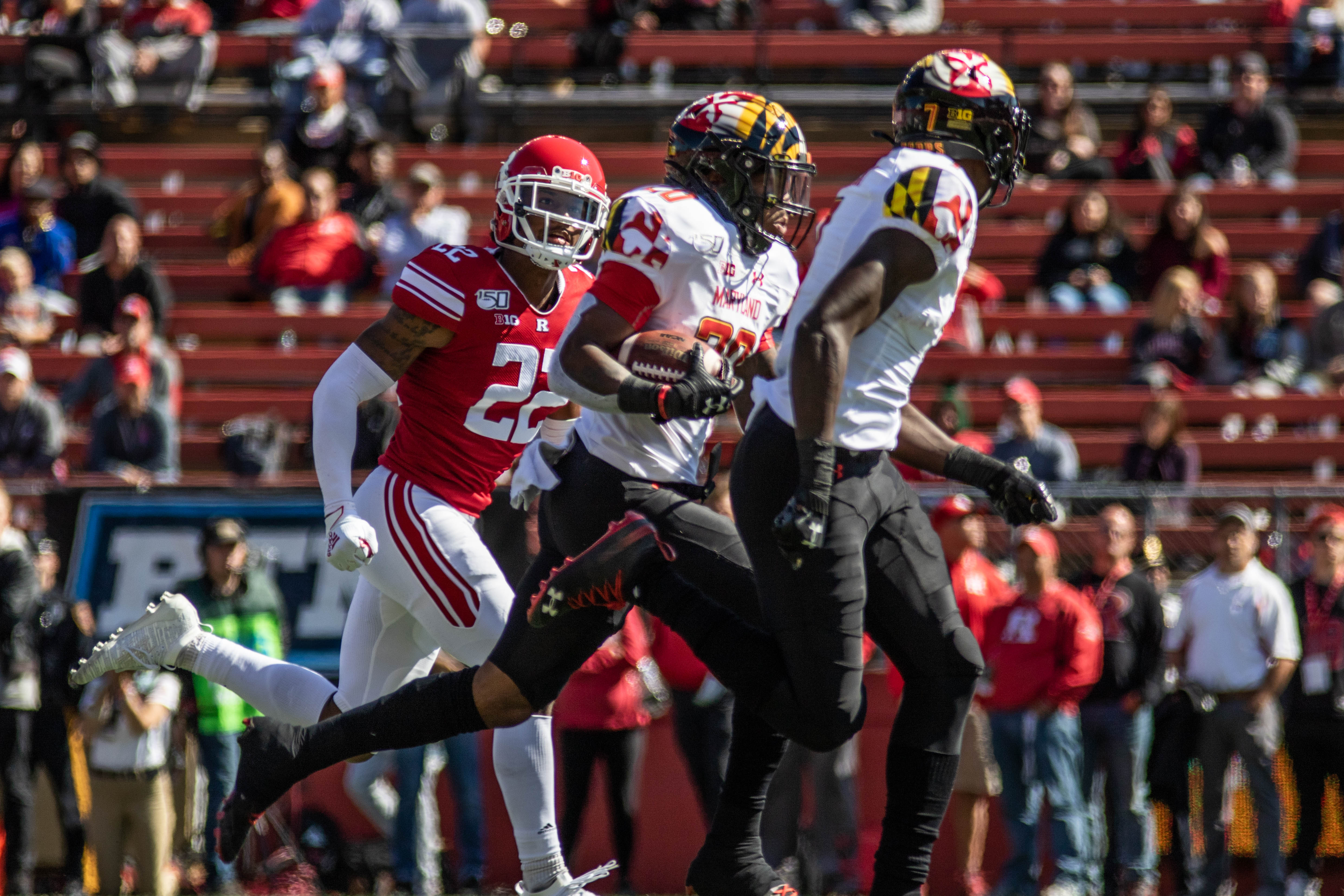 In the locker room at halftime, the talk began.

Maryland football already held a 20-point lead over Rutgers on Saturday, but after quarterback Josh Jackson went down with a high-ankle sprain moments before intermission and with the Terps due to receive the second-half kickoff, teammates turned their attention to running back Javon Leake.

“Everybody was saying, ‘House call! House call! You’ve got this Javon, let’s get it,’” Leake recalled postgame. “So, you know, that’s what we did.”

That’s what he did, indeed.

With the sun in his eyes at SHI Stadium, the kickoff initially sailed right through Leake’s arms. But the ball bounced back up to him about a yard deep inside the end zone before he scooped it up, raced right past oncoming Scarlet Knights gunners and turned upfield, applying a burst of speed that carried him 100 yards for the touchdown.

The play, the second of three touchdowns Leake scored on the day, helped propel the Terps to a dominant 48-7 victory. The effort also earned him Big Ten Special Teams Player of the Week honors, the conference announced Monday.

“I couldn’t even see, I just had my arms open. The sun was in my eyes. I was just like, ‘Please let me catch this,’” Leake said. “The timing was a little off because I dropped it. So I just picked it up and I was like, ‘I gotta make a play now.’”

The kickoff return “ignited” Maryland, coach Mike Locksley said after the contest. After Jackson’s injury, the quick start to open the final 30 minutes of play helped keep momentum on the Terps’ side.

Earlier in the game, Leake had broken a 42-yard touchdown run, one of Maryland’s three second-quarter scores that distanced the scoreline. His kickoff return was the first of three third-quarter touchdowns, including an 80-yard scamper from running back Anthony McFarland and a 12-yard score from Leake to conclude his day with 65 yards on five carries.

But it was the kickoff return that helped the Terps ensure there was no hangover effect from losing their starting quarterback.

“I just felt we were on a roll then,” quarterback Tyrrell Pigrome said, who entered for Jackson and finished 13-for-18 with 111 yards. “It just kept us going, made sure we stayed focused.”

Last year, after a historic four-touchdown performance in a big win over Illinois, Leake was named both Big Ten Offensive and Special Teams Player of the Week. He compiled 274 all-purpose yards, including a 97-yard kickoff return touchdown. And on offense, despite receiving just five carries, Leake ran for 140 yards.

As Leake weaved through blockers and Rutgers players alike Saturday before turning on the jets around midfield, the second-half kickoff return left little doubt over which team would leave victoriously.

“We executed great on the kick return, blocking. I just did what I had to do,” Leake said. “I just felt like, us getting the ball back was just gonna give us more momentum, just keep going, so the kick return was big.”