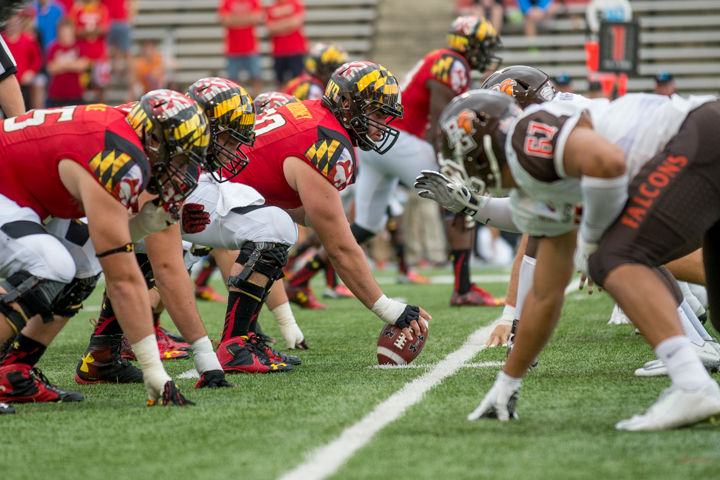 Maryland's offensive line gets ready for the snap during Bowling Green's 48-27 win over Maryland at Maryland Stadium on Sept. 12, 2015. (File photo/The Diamondback)

The University of Maryland is not good at football. The Terps got some recognition early this season for beating Howard 79-0 and being ranked after a win against Syracuse. But all things considered, this is not an impressive program. The last time Maryland finished in the top 25 was in 2010, when the Terps ended their season at No. 23. It was the only time the Terps have finished as a ranked team in the last 15 years.

It’s perfectly fine to be a university that has a bad football team. I wouldn’t be writing a column about it if that were the end of the story. But this university has been making a tireless effort to turn the team around and create a big-time program for years. It’s staking its reputation on a mediocre football team and coming up empty-handed.

The Sept. 27 game against Penn State could not have better illustrated the discordance between this university’s prioritization of its football program and the results it’s getting in return. Since moving to the Big Ten — which was probably motivated in part by the conference’s emphasis on football — there has been an attempt to forge a new rivalry with Penn State. With the game scheduled for a Friday night, the administration went so far as to effectively cancel classes after noon. Despite criticism, including a scathing editorial from The Baltimore Sun for putting athletics ahead of classes, the university stood by the move.

With students out of class and the team’s supposed rival in town, the Terps lost in spectacular fashion, 59-0. Of course, this was no reason to doubt that the university would continue its push for a headline football team. The Diamondback reported last Sunday that Cole Field House, a football facility, will cost $55 million more than planned, bringing its total to $210 million.

There’s now a growing list of incidents that should make any right-minded Terps fan cringe. Take last year, when the university literally started giving away thousands of dollars in scholarship money at every game to a random student who stayed for the fourth quarter in a desperate attempt to boost attendance.

There is plenty to be said about how football shouldn’t be a priority at any school because of the serious health-related issues associated with the sport, especially the prevalence of concussions and other head injuries. There’s also a good argument to be made that sports shouldn’t really matter at academic institutions.

But even forgetting these concerns for the moment, this university’s pursuit of profits from college football is financially misguided and incredibly risky for a school that has already seen its fair share of scandals.

As economist Andrew Zimbalist told The Baltimore Sun in 2018, the university has been “trying to chase the end of the rainbow” by jumping through hoops in the hopes of elevating its football program and reaping the profits of a successful Division I football team. Yet the team is still bad, and its approximately $19 million in operating costs have done little to bring in money for an athletic department that barely breaks even year after year.

This isn’t just a fruitless endeavor — it has already had serious consequences at this university. Last year, after the death of Jordan McNair and the abuse of other players, the pressure to create a competitive football program nearly saved the job of the coach who oversaw it all. The scandal that arose from the Board of Regents’ attempt to keep DJ Durkin in place will be a long-lasting blemish on the school’s reputation, and it certainly isn’t going anywhere soon considering that the university’s accreditation is currently under review as a result.

This university does not need to be a football school. It definitely doesn’t need to sell its soul in an effort to become one.