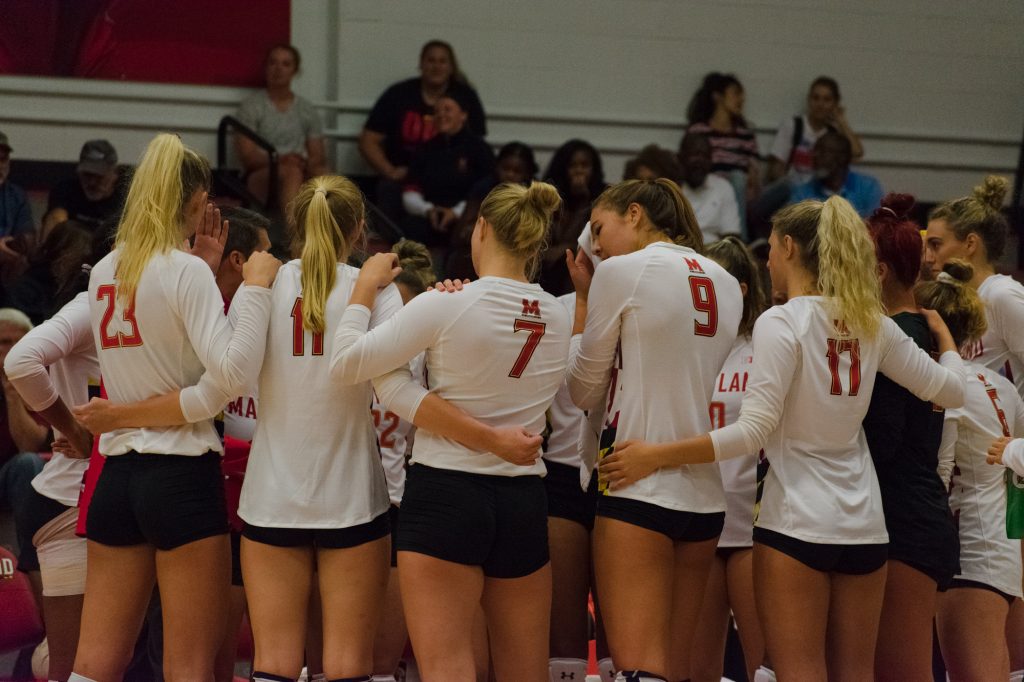 Last Saturday, three quick sets in East Lansing were all that Michigan State needed to send Maryland volleyball packing. The straight-sets defeat gave the Terps their first 0-2 start in the Big Ten since 2016.

It pushed coach Adam Hughes’ squad to an 8-6 overall record, but 18 more matches remain on the schedule, providing ample time for Maryland to overcome their early conference woes.

And with the Terps playing their next two matches at home — including a rematch with the Spartans — the team will have a less daunting road to getting back on track.

“We’ve been a lot more positive,” middle blocker Rainelle Jones said. “Instead of letting the losses get us down, we’re kind of resetting to gather some more positive energy.”

After having only two days between matches last week, including a travel day, Maryland had a full five days to prepare for this weekend’s matches. The team returned home Sunday and was back in the gym Tuesday.

Against Michigan State, the Terps struggled to get anything going, playing in front of a hostile crowd. Hughes acknowledged that as a challenge for his young team.

“We’re a young group, we were on the road, and I think we were disappointed in ourselves,” Hughes said. “I hate to say it, but we came back and had a great practice.”

The Terps faced tough matchups all over the court against the Spartans, with freshman outside hitter Rebekah Rath the only Maryland player who compiled double-digit kills on Saturday.

Rath, the youngest member on the team, turned 18 years old on Thursday. Despite her inexperience, she has proven vital to the Terps’ attack as it continues to grow and rediscover its identity.

One standout from last weekend’s loss was Maryland’s struggles serving and passing. The Terps allowed four service aces from the Spartans, and they made seven service errors themselves.

The Spartans subsequently breezed past Hughes’ squad, winning all three sets by at least five points as the Terps handed over free tallies and struggled to defend the serve.

But now, back at Xfinity Pavilion this weekend, Maryland is expecting to have the added luxury of a crowd rallying behind it. Last season, Jones’ family showed up in full force for a home match against Ohio State, which the Terps took in a five-set thriller. She hopes a similar presence this weekend can get the Terps in the win column in Big Ten play.

“The Jones tribe is definitely going to be back for the Michigan State match,” Jones said.