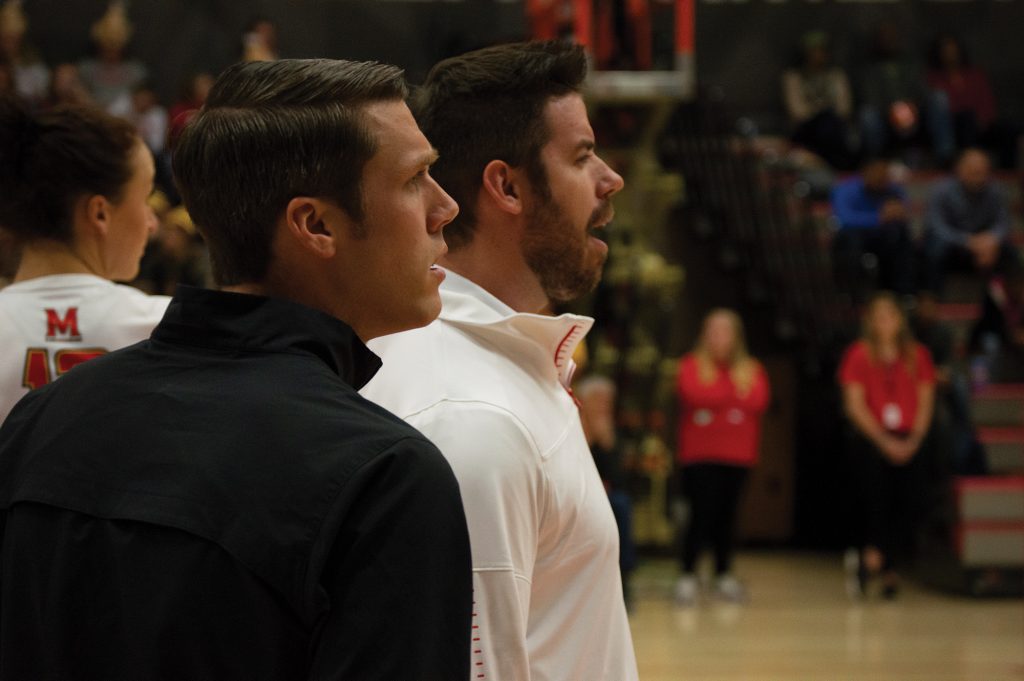 Before he joined Maryland volleyball, Adam Hughes served as the director of volleyball operations at Penn State, helping them to a national championship in 2013.

In that role, Hughes was responsible for operating the Data Volley and Data Video software the Nittany Lions used. A year later, he was hired as an assistant under former Terps head coach Steve Aird, bringing both the technology and knowledge of it to the University of Maryland.

And since being promoted to Aird’s job in 2018 after he left for a job at Indiana, Hughes has amplified the use of data and statistical analysis — and the current roster seldom goes a day without checking individual and team metrics.

“We’re able to connect every play to all the statistics,” Hughes said. “It gives us our rotations and any other details you want to find out.”

Each player can look at comprehensive metrics that are specific to them and address how they can improve based on those numbers.

Hughes notes that the volleyball metrics have become increasingly important this season. While in previous years statistical analysis remained mostly within the coaching staff, it has since become a more individual process for the players.

“It’s a really great tool for us to use,” middle blocker Katie Myers said. “I think looking at video and analytics on our own time makes it easy for us. We can just log on, look at practice tape at any time and ask questions the next day.”

The movement toward advanced volleyball metrics is picking up steam across the country, but no conference uses them quite as much as the Big Ten.

Multiple teams have added a “technical coordinator” position within their respective programs that deals solely with metrics, similar to the director of volleyball operations job that Hughes once held.

In a conference that sent seven teams to the NCAA Tournament last season, every program is using metrics to scout its opponent, including the Terps.

“There’s so much information out there, and we’re all learning it,” Hughes said. “We use the metrics a lot for our opponents for many different reasons.”

Though Maryland’s success comes down to how they perform during a match, data and metrics are large factors in how they prepare.

Hughes sees metrics as the best way for the team to master its craft, and that is reflected in the time he puts into interpreting the numbers.

“[Hughes] puts in a lot of work for our team, which I appreciate,” middle blocker Rainelle Jones said. “Him coming in with the whiteboard and breaking down numbers for us became a really good routine in practice.”

Hughes’ vision for the use of analytics in the Terps’ volleyball program is extensive, but it boils down to getting his players more involved in their individual growth.

“It’s something that the program has invested heavily in,” Hughes said. “Our number one thing is building a plan for each player to know what they need to get better at.”