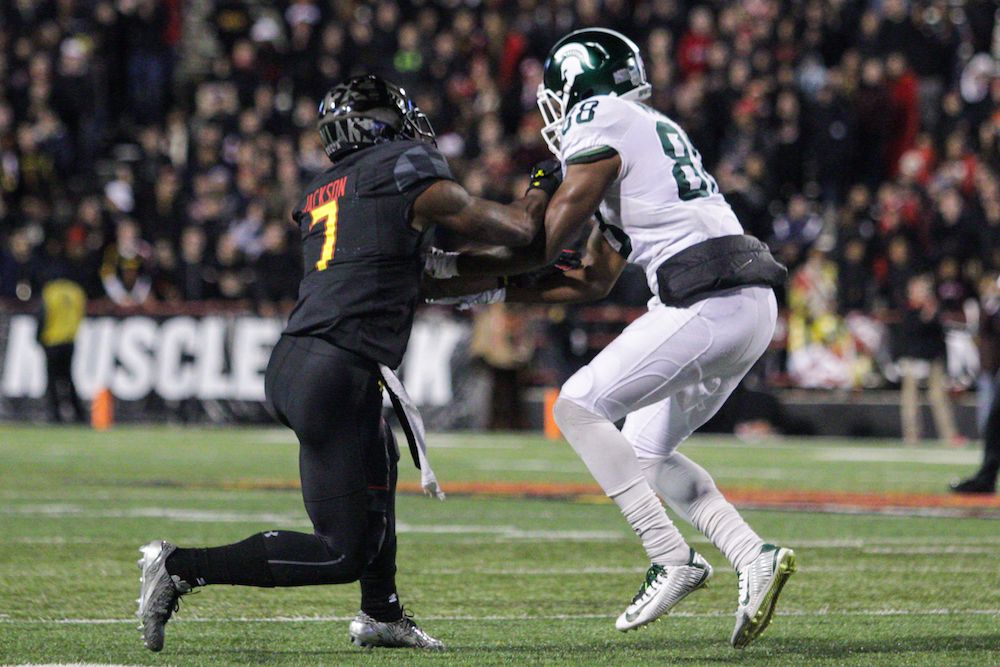 Week four in the NFL was a big one for many former Terps, with a few having their best game of the season to date.

Cornerback J.C. Jackson had the best game of his career in the Patriots win over the Bills on Sunday. He snagged two interceptions and blocked a punt that led to a Patriots score. The interceptions were his first and second of the season, and the block was the first of his career. He was a pivotal piece of both the defense and special teams, leaving his mark on both phases of the game. Jackson will look to build on a strong game moving forward, as part of a defense that has exceeded expectations so far this season.

Stefon Diggs had arguably his best game of the season so far, catching seven passes for 108 yards. Those are both season highs and more than his output in the first three games combined.  Diggs was held without a touchdown for the third time in four games, with his only score coming against the Packers in week 2.

Carolina Panthers wideout DJ Moore caught three passes for 44 yards with a long of 16 yards in the Panthers 16-10 win over the Houston Texans on Sunday. Moore scored his first touchdown of the season last week against the Arizona Cardinals but was unable to add another in week 4.

After a quiet week three, Carter recorded 6 tackles in the win over the Texans on Sunday. Carter was also active on Twitter after the win, quote-tweeting a tweet that showed the Texans’ Deshaun Watson doing the finger wag in Carter’s face as he scored a rushing touchdown. Carter wanted to ensure it was clear who won the game, tweeting “Hold that L young man” after the Panthers victory.

After recording his first career interception against the Denver Broncos last week, Savage recorded three tackles in the Packers 34-27 loss to the Philadelphia Eagles on Thursday night. The 2019 first-round pick has gotten off to a hot start through the first quarter of the NFL season and is even gaining steam as a potential Defensive Rookie of the Year candidate.

Despite a big game in week one in which he hurdled a defender en route to a long touchdown, Davis has had a relatively quiet 2019 season, which continued in week 4. The 14-year veteran was held to one catch for five yards, as the Redskins lost 24-3 to the New York Giants.

Quinton Jefferson recorded two tackles in the Seattle Seahawks 27-10 win over the Arizona Cardinals on Sunday. After opening the season with two sacks in week one, Jefferson has yet to get to the quarterback again, being held without a sack over the last three games.

Despite high expectations following his move to second on the depth-chart, Ty Johnson had a lackluster performance, getting just three carries for 13 yards and catching one pass for one yard in the Lions’ loss to the Chiefs. J.D. McKissic actually played more than snaps than Johnson in the contest, putting the rookie’s role into question moving forward.

Yannick Ngakoue recorded three tackles in the Jacksonville Jaguars 26-24 win over the Denver Broncos on Sunday. He has yet to register a sack this season which is surprising considering he has recorded at least eight sacks each of the last three seasons. Ngakoue will look to change that against the Panthers in week 5.

Josh Woods did not record any statistics in the Chicago Bears 16-6 win over the Minnesota Vikings on Sunday. Woods has yet to make an impact on the stat sheet this season, primarily serving as the team’s third inside linebacker. With linebacker Roquan Smith out indefinitely due to a personal issue, Woods’ role on the defense may expand in the coming weeks.

Rookie defensive lineman Byron Cowart did not record any statistics in the New England Patriots 16-10 win over the Buffalo Bills on Sunday.