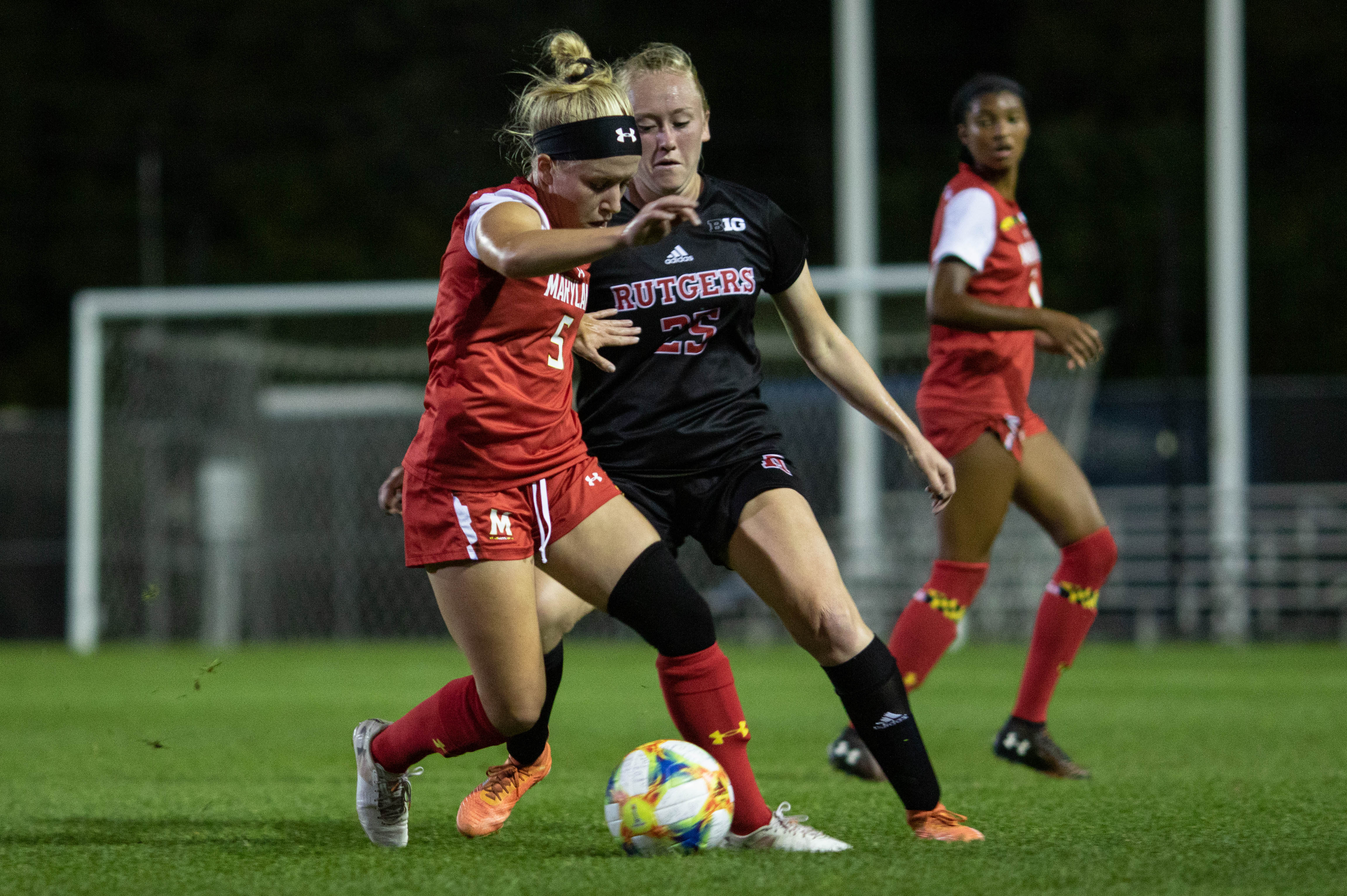 Late in the first half Saturday, with Maryland women’s soccer already leading, forward Alyssa Poarch stood over a free kick with a chance to add on.

The ensuing ball curled into the box and took a deflection, landing perfectly at the feet of midfielder Hope Lewandoski, who turned and fired at goal. Rutgers goalkeeper Meagan McClelland couldn’t make the save as the ball bounced into the net, sparking celebrations for a two-goal Terps lead against a ranked opponent.

Lewandoski ran back toward her bench and screamed “Let’s go!” as her teammates celebrated the critical tally in Maryland’s 2-1 upset over No. 20 Rutgers in Piscataway, New Jersey.

“Wow, it was a remarkable performance by the Terps,” coach Ray Leone said. “It was the highest level they’ve seen or played. It was really something else.”

[Read more: Maryland women’s soccer must contend with a mighty attack against No. 20 Rutgers]

The Terps (6-3-2) were considered underdogs in their first ranked matchup of the season against a formidable Scarlet Knights (7-2-1) team. Maryland was also looking to win its first away game since its first match of the 2018 season against William & Mary.

The Terps have been a tough team for ranked opponents in the past. Last season, Maryland was able to knock off then-No. 14 Northwestern and drew then-No. 22 Wisconsin. This season, though, the squad had struggled on the road, winless in its first three attempts. Saturday changed that trend.

“Rutgers is such an experienced, top-level team that has been at the top of the Big Ten many, many times,” Leone said. “To see our team play like that was quite special.”

Rutgers opened the game with most of the control, but the Terps’ defense kept them in it through the first 20 minutes despite two early chances from midfielder Julia Aronov. Maryland finally found its offensive footing in the 21st minute as Poarch made some space outside the box and took a shot, forcing a save from McClelland.

The Terps began amping up their offense from there, taking more control of possession — and it led to the opening score.

A clearance from inside the Maryland box found the foot of Poarch around midfield. She took off down the field, beating out two Rutgers defenders. Her shot was just out of reach of McClelland to establish a 1-0 lead.

“That was an incredible goal,” Leone said. “We were in our own end, and then it was a quick counter. It was kind of exciting because you saw her with all of that space, with 50 yards to go. But just because you have that space, it’s not an easy goal to finish.”

Rutgers continued to hold the majority of the possession but was unable to create any solid opportunities. And with the Scarlet Knights’ inability to find an equalizer, the Terps capitalized through Lewandoski’s strike.

Dana Goldstein found the best chance of the first half for Rutgers as she was able to get her head on a corner kick, but the ball sailed just wide of the net.

The second half was controlled by the Scarlet Knights early, forcing goalkeeper Erin Seppi to make two impressive saves. The first had Seppi meet a wide-open Nneka Moneme and block her shot. The second was a leaping fingertip save on a curling shot from forward Brittany LaPlant.

“Erin Seppi was unreal,” Leone said. “Rutgers was threatening the whole game. Seppi had to do her part probably in this game more than any of the other games.”

Despite the clutch saves from Seppi, a deflection off Anissa Mose placed the ball perfectly outside the box for Aronov to strike. The diving attempt from Seppi was not enough to keep the ball out of her net, bringing the score to 2-1.

Poarch began to take attacking chances into her own hands. On three occasions she found a bit of space from outside the box and booted the ball at the goalkeeper. Her tactic forced two saves and continued to keep the Terps threatening.

Meanwhile, forward Amirah Ali finally got involved in the game in the 76th minute, finding space on the far side of the box. But her attempted chip sailed too high.

Ali, one of the top players in the Big Ten, had been neutralized for most of the game. Leone said she would be a handful for the Maryland defense, but it effectively held her in check Saturday.

“The backline was fantastic with [Malikae Dayes] just leading the way,” Leone said. “The amount of times she just came out of nowhere and saved us was just extraordinary.”

In the 77th minute, forward Mikayla Dayes tried to get on the board, finding a one-on-one opportunity deep in Scarlet Knights territory. She got loose from her defender on some tricky dribbling, but her shot was far wide right of the net.

The Terps were able to hold off Rutgers’ attempt at a comeback, giving them a crucial away win over one of the top teams in the Big Ten.

“This was big,” Leone said. “To get our team’s belief that they are a special team. This was a really important game to play at Rutgers, where we’ve never really done well. We played well, and now it’s time to go home and recover again and get ready for another special team.”