Maryland women’s soccer must contend with a mighty attack against No. 20 Rutgers 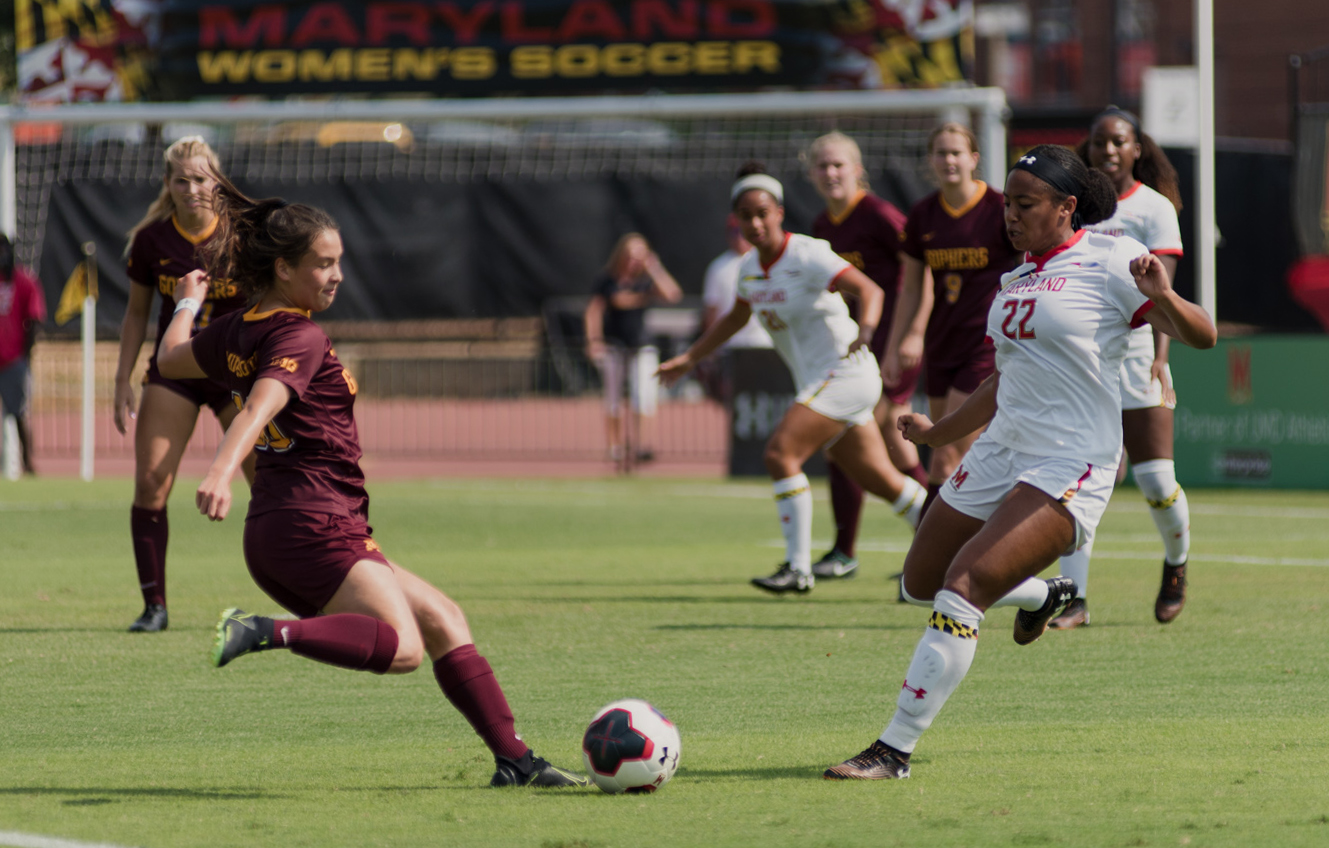 Coming off its 2-0 win over Minnesota, Maryland women’s soccer ended a four-game homestand with a 2-1-1 record.

The Terps have impressed at home, dropping their lone game to a now-ranked Wisconsin team. But playing on the road has been a struggle for Maryland this season, being outscored 10-1 when not at Ludwig Field.

So, when the Terps travel to face No. 20 Rutgers on Saturday, they’ll not only have their hands full with a potent Scarlet Knights offense — they’ll also have to buck a worrying early season trend away from home.

“We’ve got to defend together,” coach Ray Leone said. “And if we’re separated, that’s when we struggle, so we’ve got to be together.”

[Read more: “She means a lot to this team”: Maryland soccer rewarded Andi Wenck with her first start]

The Terps’ defense has been a tough line for opposing forwards to crack the past few weeks, stifling attacking play early and clearing the ball well once it reaches their own box. Junior Malikae Dayes has had a strong season so far, garnering a Big Ten Defensive Player of the Week honor for her performance two weekends ago. She’s only missed nine minutes of total game time this year.

Dayes and centerback partner Julia New have been a constant tandem in the starting eleven since Sept. 5, when New made her season debut. Those two could be pivotal in slowing down a Rutgers side that has scored 17 goals through nine matches.

“Good relationship,” Leone said of the duo. “When you’re playing a centerback combination, it’s really about the combination. They understand each other, good communication between them. I think that is what is permeated through the back four.”

After only playing in nine games last season, junior Alexis Hogarth has also made herself a reliable starter for the Terps at fullback, featuring in all 10 games. Although her most impactful moment came on a goal she scored from around midfield against George Mason, she has found success in slowing down opposing attacks.

However, the Terps’ struggles while away could be exploited by the strong attacking line of Rutgers, led by captain Amirah Ali. Ali, a second team All-American in 2018, currently has six goals and two assists this year.

“We’ve got to defend one of, if not the, best player in the league,” Leone said. “Amirah is a phenomenal player. She is a handful for anybody.”

Maryland has looked like a different team while away this season, but despite any shortcomings from the defensive line in those matchups, goalkeeper Erin Seppi said she backs their abilities.

“Making sure that any type of ball going through the backline, that I’m communicating with them is always one of the most important parts of the game,” Seppi said. “I have a back line that listens to me, that is aware of their surroundings, and that communicates themselves.”

Seppi has been a key to Maryland’s recent success, making the most of her first season as the No. 1 between the sticks. Playing against the Scarlet Knights, Seppi will get the chance to face an offense that averages more than 14 shots per game, a trend that seems destined to be repeated because the Terps have allowed more than 14 shots in every away game this year.

Maryland will be tested in its first ranked matchup of the season. But after a win in Big Ten play and a solid homestand, the team feels confident heading into its latest challenge.

“I’m excited for Rutgers,” goalkeeper Andi Wenck said. “We just came off a hot win against Minnesota, it’s going to be an exciting weekend.”