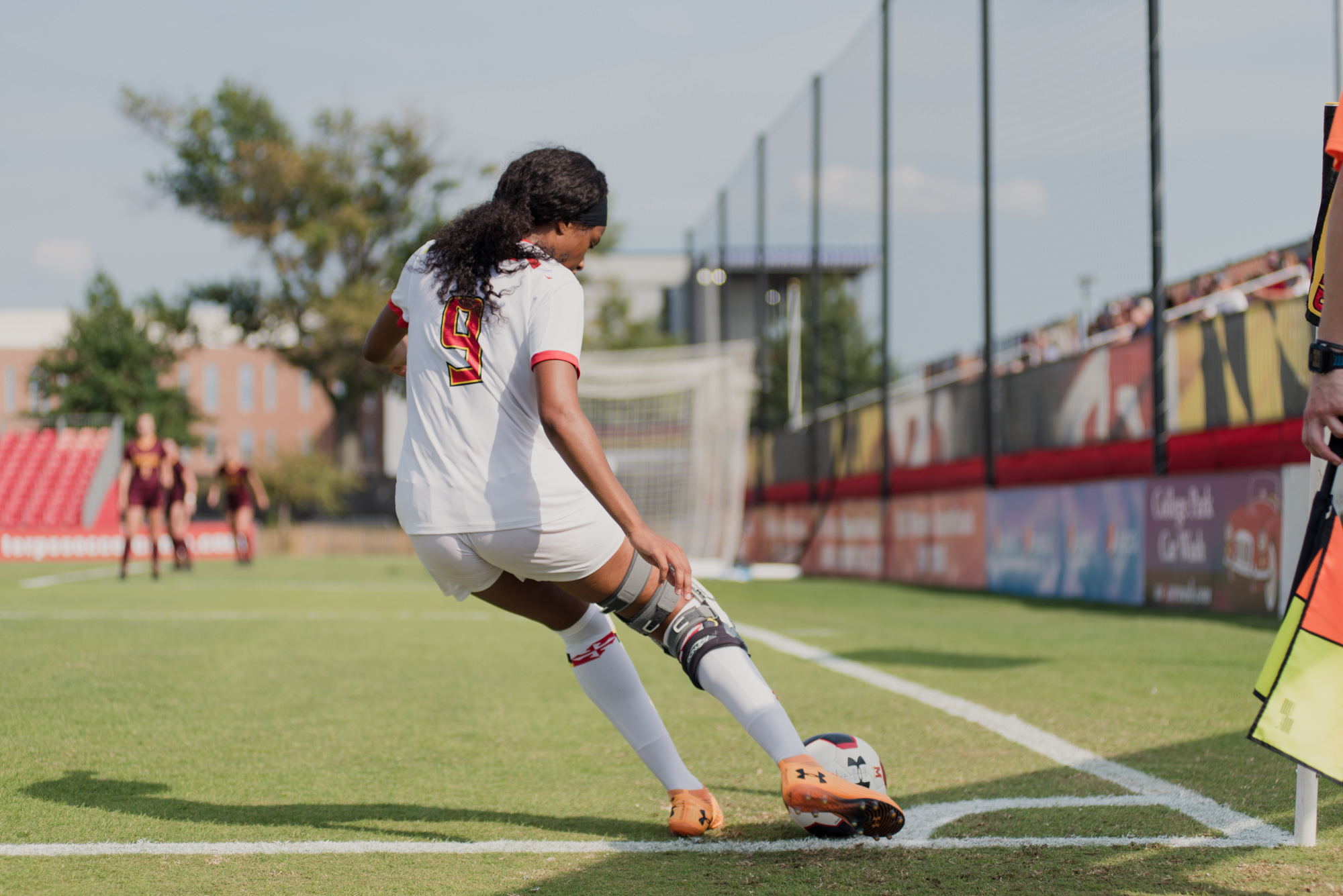 Jlon Flippens fired a free kick into the box early in Maryland women’s soccer’s bout against Minnesota on Sunday, perfectly finding the foot of forward Mikayla Dayes. One touch later, Dayes had slotted home her fourth goal of the year.

Since returning to the Terps’ women’s soccer team two weeks ago, Flippens has been connecting nonstop with her attackers. She has racked up four assists in three games since coming back from an ACL injury she suffered during the 2018 season — including two in Maryland’s 2-0 win over the Golden Gophers.

As the Terps dive into their conference schedule, those constant combination plays, particularly from Flippens to her teammates, could make all the difference.

“It’s partnerships,” coach Ray Leone said. “We’re developing starting partnerships and reserve partnerships. It’s starting to come together that they know how each other plays. And now they inspire each other and it’s been pretty good for us so far.”

These alliances played a key part in Sunday’s win, as Maryland celebrated Senior Day, honoring its eight senior players. The starting lineup consisted of six of those seniors, with Niven Hegeman out because of an injury and usual starting goalkeeper Erin Seppi on the sideline.

For players like Andi Wenck, Brynn Drury and Kate Swetz, it marked the first time this year they were in the starting 11. And for Flippens, also a senior, the win was defined by more than just cohesion on the field.

“It’s that emotional aspect,” Flippens said. “Remembering from the first day we were on campus until the spring. One thing we just embraced that this is potentially our last season playing together. Coming together for people who haven’t started, people who haven’t played major minutes, making sure that everybody feels special.”

Senior players would end up having a big impact on the match, as Seppi took over in goal and kept a clean sheet despite an onslaught of opportunities from Minnesota late in the second half.

Flippens continued her strong play against the Golden Gophers, linking up with both starting strikers despite playing on the backline. Her connection with Dayes was the first time they combined for a goal this season, and her later assist on an Alyssa Poarch goal was the second time they’ve linked up since Flippens’ return.

Flippens and Poarch have been clicking since they both joined the lineup, but Sunday was only the fifth game they’ve played together despite being on the same squad for three years.

“There is definitely an eye contact thing I can see that they’re looking at each other so they know what’s going to happen,” Leone said. “So they just pull the trigger.”

Flippens chalked up the play to how well she knows the two strikers, how they run and what types of passes to give them.

“They make me look good by putting the ball in the net,” Flippens said.

Since Flippens’ return from injury, Leone has been impressed with her play, and her performance against Minnesota showed that he can take more chances with ramping up her playing time as she gets back to full speed.

Moving further into the season, as Maryland solidifies its starting 11, the team will continue to put emphasis on building up its partnerships. As the team showed on Sunday, they could be crucial to a successful conference slate.

“We’re just looking to keep working hard together,” Dayes said. “And try to win every single game. Keep the intensity up and staying focused.”