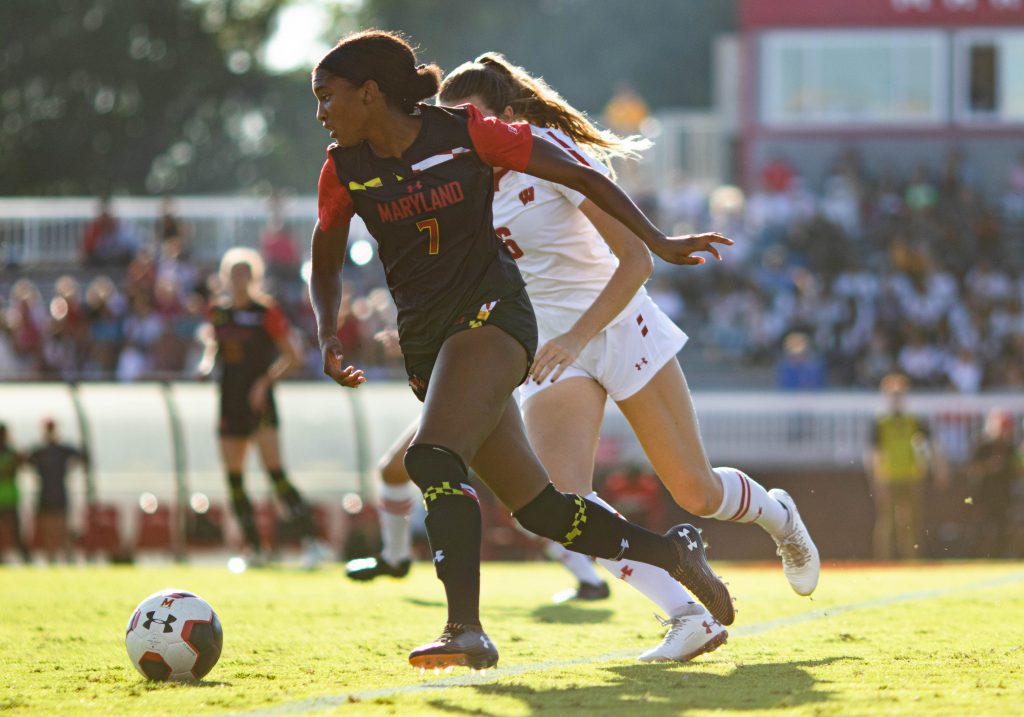 After Wisconsin’s third and final goal Friday, “Let’s Go Badgers!” chants echoed through Ludwig Field as the visiting support made themselves heard against Maryland women’s soccer.

In the opening game of Big Ten play for both teams, Badgers fans filled a large part of the stands, creating a different atmosphere than the Terps had experienced in their previous home games.

“It didn’t fall our way,” midfielder Darby Moore said. “We took too long to get into the game. I think anyone who watched the game could definitely tell that when we picked up the mentality and we were playing well we were there with them.”

[Read more: With vaunted Wisconsin up next, Maryland women’s soccer hopes to ride its home success]

The Terps started out on the back foot, with an explosive Wisconsin attack creating opportunities out of the gate. The Badgers’ first chance came from a cross into the box in the sixth minute. There were two attempts at overhead kicks by attackers but the ball was cleared by midfielder Anissa Mose without a shot being registered.

“We didn’t come out as sharp as we wanted to,” goalkeeper Erin Seppi said. “We struggled a little bit in the first half, but I thought we held our own.”

Forward Cameron Murtha found a dangerous chance in the 21st minute for Wisconsin, dribbling around Seppi, but a sliding tackle from defender Julia New kept the game scoreless.

A few minutes later, however, New wasn’t able to prevent a Badgers goal. A cross by midfielder Payton Wesley found its way on the wrong side of Seppi, and the attempted clearance by New went directly into the net, putting Wisconsin up 1-0.

“We just made a lot of errors,” Leone said. “Some forced by Wisconsin’s good play, some by our own choices. We gave away the ball in really bad spots and it cost us.”

The Terps had to play most of the first half out of the back with the Badger attack constantly pressuring Maryland to pass around the back.

Midfielder Loren Sefcik tried to get things going for Maryland a few times, but the speed of the Wisconsin defense forced her to take all of her shots from outside the box. In the 31st minute, Sefcik tried to catch the Badgers goalie off her line, but the shot was caught with relative ease.

And forward Emily McNesby nearly tallied her second goal in two games when forward Alyssa Poarch played her through by flicking a goal kick into McNesby’s path. The shot was partially blocked by a Wisconsin defender, letting goalkeeper Jordyn Bloomer scoop up the ball undeterred.

At the end of the half, the Terps were only down one. But Maryland hadn’t created too much of a threat, getting outshot 10 to 3 in the opening 45 minutes.

“It wasn’t a good performance by us,” Leone said. “We’ve got to put it behind us quickly. But I was pleased with how they finished the first half. That they held on and turned it a bit.”

Wisconsin came out of the break just as strong as it had in the first half, loading up the Maryland box with attackers in the 50th minute. Lauren Rice finished a cross in from Murtha to put the Terps down two shortly into the frame.

Less than two minutes later, Maryland found itself plucking the ball from its net again. This time, Dani Rhodes made her way into the box and finished the Badgers third goal on another cross from Murtha.

In the 65th minute, Wisconsin nearly added to its lead, getting numbers in the box and taking three shots from point-blank range, all three saved by Seppi.

The Terps struggled to make many chances in the second half, unable to register their first shot until the 69th minute when Kaylee Kozlowski tried her luck from outside the box. The shot was blocked by a Badgers defender.

Kozlowski found the best chance of the game off a cross in front of goal from forward Keyera Wynn, but the shot took a deflection off a Wisconsin defender setting up a corner kick.

Alexis Hogarth came darting into the box on the corner kick, but the header was saved by the Badgers keeper, getting her hands up in time to hit the ball to the ground. Wisconsin kept the Terps’ offense at bay for the rest of the game as they attempted a comeback, thwarting Maryland’s hopes of an undefeated home record.

“Right now we just need to focus on being responsible and holding each other accountable,” Seppi said. “So, playing every moment in the game and taking it seriously, giving it everything we’ve got, and then I think we’ll be okay.”