No. 12 Penn State dominates Maryland football from start to finish in 59-0 rout 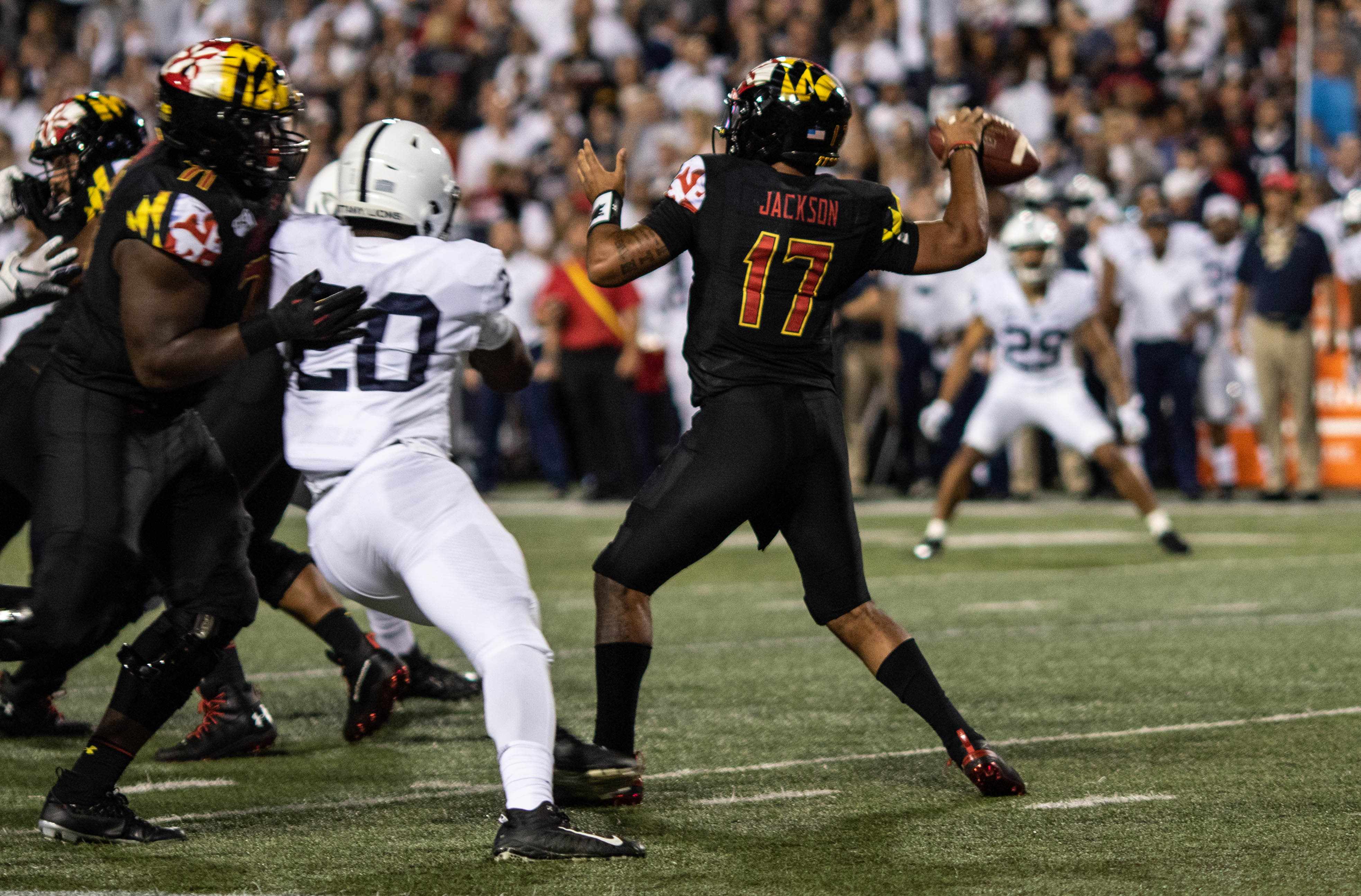 When K.J. Hamler caught a pass on a slant route midway through the first quarter Friday night, he had 50 yards and a crowd of Maryland football defenders between himself and the endzone. But the Penn State wide receiver quickly made a nonfactor out of the distance and the bevy of black jerseys ahead.

Cornerback Kenny Bennett was left in the dust after Hamler’s first cut, and safety Deon Jones missed on his tackle attempt, chopping at Hamler’s legs but failing to bring him down. Then, as the junior turned upfield and hit the gas, cornerback Marcus Lewis became his next victim.

Hamler feinted left and right and Lewis slipped to the turf, opening a green sea of space for him to lead the Nittany Lions through, the second touchdown of a contest that got away from the Terps as soon as it began.

The extra bleachers set up to accommodate the overflow of student interest began to empty before halftime, and the hype for the matchup with No. 12 Penn State — one that coach Mike Locksley stopped short of calling a rivalry — deflated. Locksley was right. For a game to be considered a rivalry, it needs to be competitive. And Friday’s 59-0 obliteration was anything but for the third straight year.

“We’re not going to overreact from one game,” Locksley said after his squad’s second straight loss this season. “Give credit to Penn State. They were well prepared, they played at a high level.”

[Read more: Friday night will be a big game, but Maryland football isn’t overhyping it]

The no-show at Maryland Stadium continued what Penn State had started in 2017 — first, a 66-3 blowout; next, a 38-3 wallop. The 2019 edition perpetuated the series of disasters.

But there was reason to believe — at least through two weeks of the season — that this Terps team (2-2) might prove different. In Locksley’s first season as the full-time head coach in College Park, his offense jumped out to a combined 142 points against Howard and Syracuse.

The machine ground to a halt in Week 3 against Temple, though, with a subpar night from quarterback Josh Jackson and goal-line ineptitude at the forefront of a 20-17 loss. And on Maryland’s first possession against Penn State (4-0), those struggles resumed.

Jackson had wide receiver Dontay Demus open over the middle on a post route, but the quarterback didn’t see linebacker Jan Johnson in underneath coverage and rifled a pass that found the wrong color jersey.

“This was definitely a team loss today,” offensive lineman Ellis McKennie said. “We weren’t firing on all cylinders on any of our teams. We need to work together and play better complementary football in all three phases.”

Then, on the interception return, Jackson was called for a late hit, setting the Nittany Lions up on the 9-yard line and allowing quarterback Sean Clifford to run uninhibited into the endzone on the first play.

That started a string of four straight series with Penn State touchdowns, including Hamler’s escapade through the Maryland defense. Meanwhile, a 14-play drive that lasted over six minutes ended with Jackson’s second interception, sparking a 95-yard drive from the Nittany Lions.

“We had two turnovers, we gave up two big, explosive plays,” Locksley said. “Right from the start, we didn’t give ourselves a chance.”

But it wasn’t until Clifford’s 15-yard touchdown pass to tight end Nick Bowers with about nine minutes remaining in the second quarter, putting Penn State up 28-0, that the allure of being anywhere else but Maryland Stadium led to the first great migration of students toward the exits.

Hardly any remained by the time running back Journey Brown punched in a 1-yard touchdown to put his squad up 45-0. He was just one of a multitude of weapons that ripped apart a Terps defense that had looked much improved this year.

“Our fans came out and created a hell of an environment for us today,” Locksley said, “and we went out and didn’t do our job as a team.”

Clifford finished 26-for-31 with 398 yards and three touchdowns, setting a school record for first-half passing yards. Hamler reeled in six catches for 108 yards, and Brown and running back Ricky Slade both found the endzone.

“It’s all on us,” linebacker Keandre Jones said. “We’ve got to prepare better and just keep moving on.”

So Friday’s contest, despite all the buildup and anticipation, turned into a stark reminder of where Penn State stands as a program and just how far Maryland lags behind. Since joining the Big Ten in 2014, the Terps have beaten their northern counterparts once. They haven’t scored a touchdown against the Nittany Lions since 2016.

As Locksley pointed out during the week, it’s not a rivalry — not yet, at least. Maryland has a long way to go, and Friday night exposed as much.