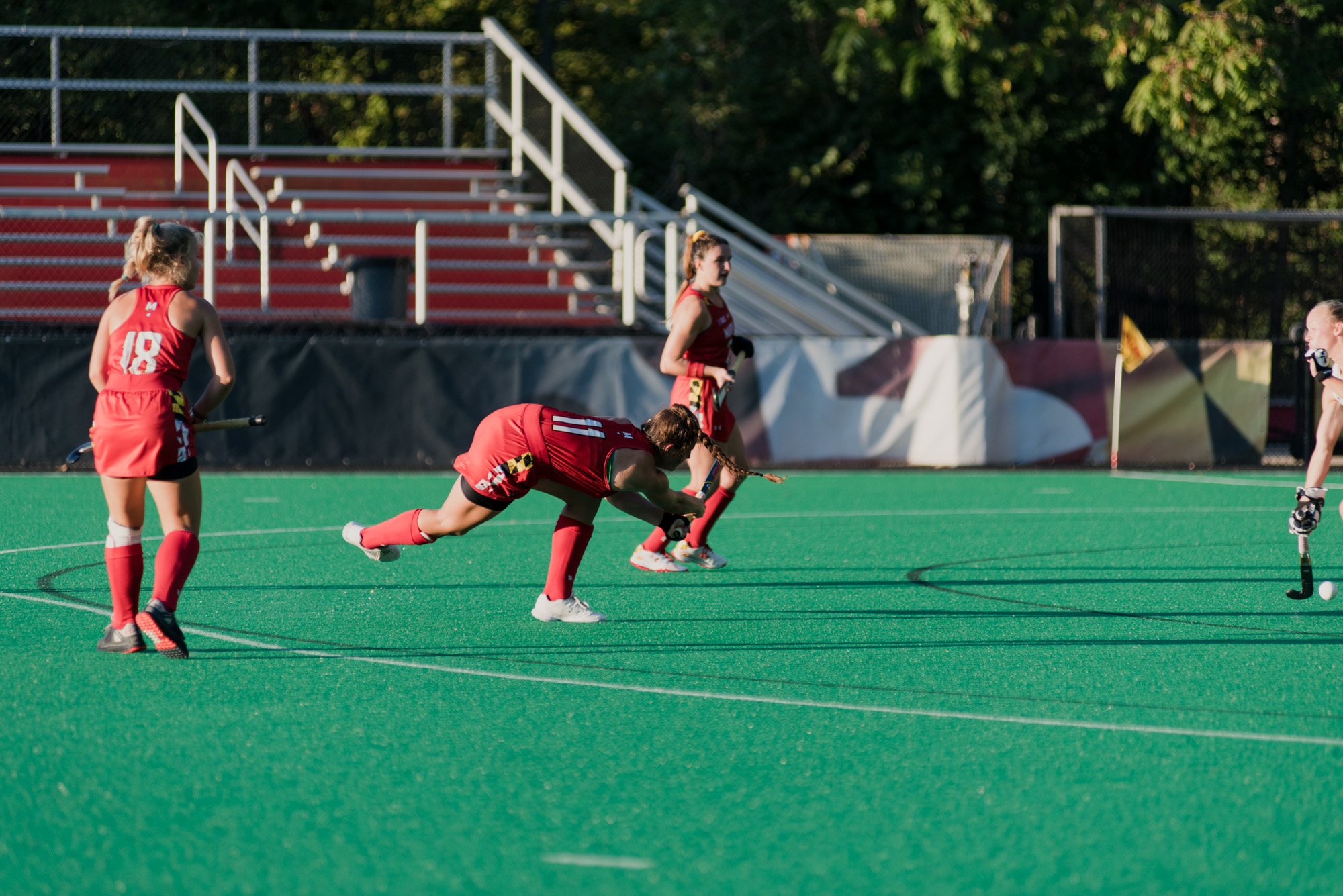 When Maryland field hockey faces off against No. 18 Rutgers on Saturday, the team will be buoyed by critical information collected through player monitoring systems.

The tracking devices — typically worn on players’ chests — break down performance by highlighting trends in player fatigue at certain points in a game. It should help Maryland’s coaching staff adjust its rotations while also giving the team vital information to prevent overuse and injuries.

The system’s effectiveness was on full display Tuesday against Princeton, as coach Missy Meharg was able to keep players fresh — even when the game went into overtime.

While the team has used similar devices before, Maryland’s use of the software reflects a renewed dedication to fitness. Consequently, the Terps’ stamina has been a critical aspect to their success this season.

“Things are happening really fast, transition is really high, [and] the physio for the players is [good],” Meharg said.

Maryland claimed a dramatic 4-3 overtime victory on the No. 10 Tigers. Given the back-and-forth nature of the game, Meharg opted for a shorter bench, as only three substitutes saw over 20 minutes of game time. Nathalie Fiechter, Brooke DeBerdine and Bodil Keus played the whole game, while Hannah Bond and Linda Cobano saw the field for 67 of the 70 minutes.

“It’s a lot of adrenaline on the field while you’re doing sprints,” Cobano said.

And with players feeling fresh and healthy, the Terps were able to put their full focus on the task at hand as the game developed into a tight overtime affair.

“I felt quite calm and controlled,” Bond said. “It’s a pretty normal situation for us, [being] put under time pressure. We still know the drill.”

Despite the low dispersal of minutes, the Terps remained active throughout the game, especially in extra time. DeBerdine was a constant threat, driving down the right flank with regularity to cause problems for Princeton’s backline. Meharg credited the player tracking device with helping the midfielder get through the game.

“We have player monitoring systems on her, we know exactly where she is, and she can recover,” Meharg said. “She’s that fit.”

Meanwhile, Maryland has taken advantage of the NCAA’s switch this season from halves to quarters. The two-minute intermissions between the first and second quarters and the third and fourth quarters provide the perfect opportunity for Maryland players to rest and recover, something that is especially important given the demanding nature of Meharg’s preferred playstyle.

“In our trainings, we’re doing a lot of two-minute breaks,” Meharg said. “We’ll play for five minutes competitively, really get high physio, come over — two minutes — and go back out.”

As the schedule has continued to pick up in difficulty, games have taken on a faster pace. It’s something the Terps feel comfortable with, though, given their penchant for quick passing and incisive runs. And these breaks ensure that they start the next frame crisp and well-prepared.

Meharg’s squad has proved to be an incredibly fit unit, claiming victories over two top-10 teams despite going into extra time in both matches. With the quality of opposition set to ramp up even more in Big Ten play, Maryland will hope increased fitness levels continue to give it an extra edge.

“We’re getting good at it, which is nice,” Meharg said. “We’re finding a way to win.”