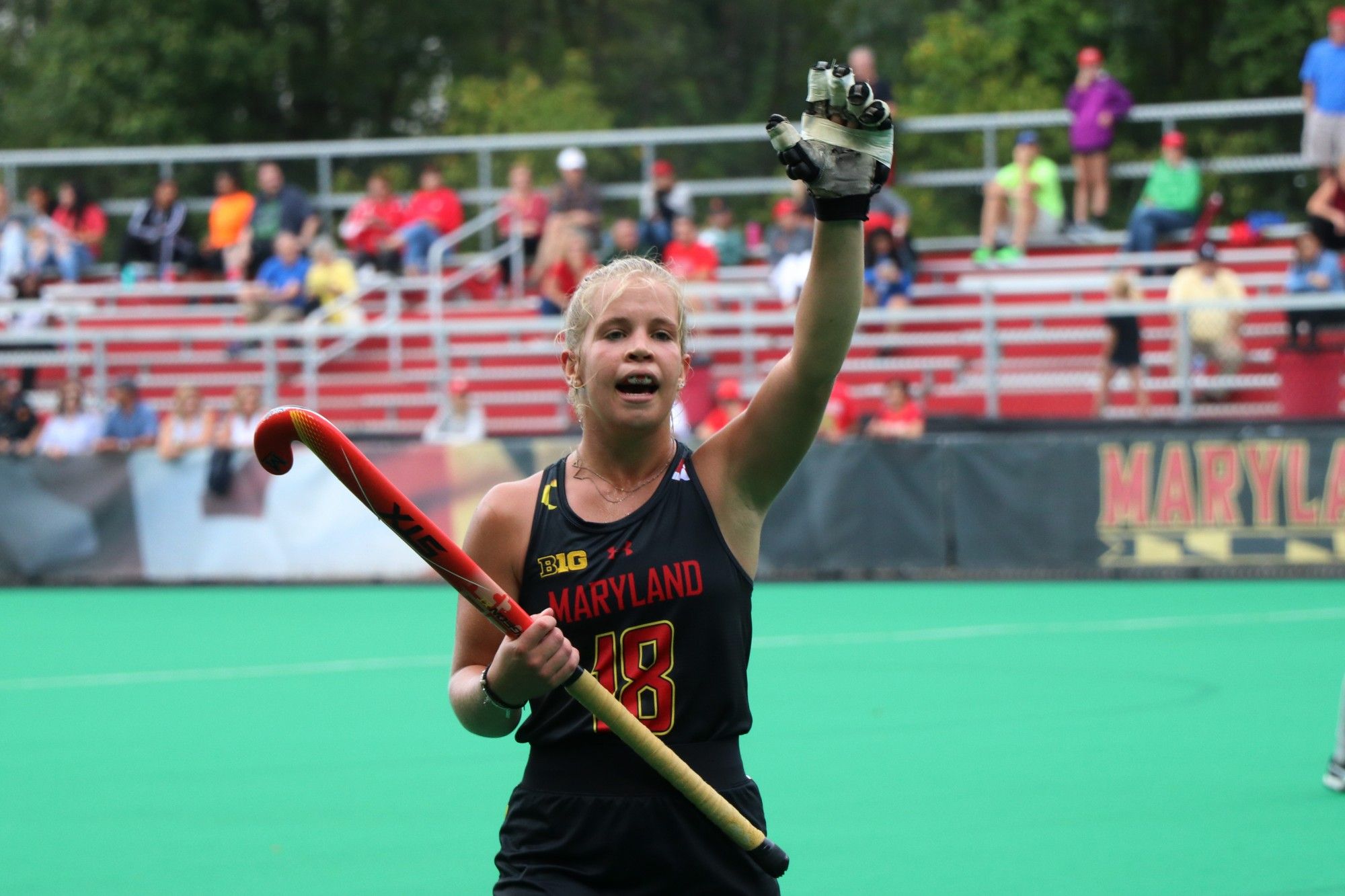 Hannah Bond stood just outside the goalmouth, gasping for air with hands firmly placed on her hips as her Maryland field hockey teammates slowly made their way toward the defender.

Bond had just lifted her last-second rebounded effort past Princeton goalkeeper Grace Baylis, giving the Terps a 4-3 overtime victory. However, with the referees headed for the replay booth to see whether she had gotten the shot off in time, the Terps settled for a more reserved celebration.

But once the referees signaled that the goal indeed stood, Bond and her teammates celebrated vociferously, ecstatic to secure another comeback victory over a top-10 team.

“When Hannah scored, it was just pure relief,” midfielder Linda Cobano said. “There were so many emotions that came up.”

[Read more: Missy Meharg is building a reputation as a player and coach developer]

The back-and-forth affair began with Princeton hounding Maryland’s defense in its own half, forcing a handful of turnovers. Eventually, the Tigers capitalized on those mistakes, with midfielder Sammy Popper picking up a loose ball outside the shooting circle.

The freshman deftly flicked the ball through the legs of an onrushing Maryland defender before depositing her shot into the cage to give Princeton the 1-0 edge.

It was the highlight of an otherwise dour attacking display in the opening frame, with both teams combining for just three shots.

The Terps’ attack proved far more lively in the second quarter, forcing three penalty corners within the first three minutes of the frame.

Maryland (8-1) made the Tigers (3-4) pay for the bevy of opportunities afforded to it, with Cobano firing a shot off a hapless Princeton defender to knot the game up at one.

It was the Terps who looked more likely to score the decisive third goal of the game as the break neared. But Cobano and defender Bodil Keus saw their efforts go wide, sending the two teams into halftime deadlocked.

Both teams got off to a rapid start in the third frame as Cobano saw her third shot of the day blocked 30 seconds into the period. The sophomore was the first to react to the rebound, however, backhanding from distance to give Maryland its first lead of the game.

“I needed some time to get into the new system, get to know the players,” Cobano said. “I feel like I found my position in the team and I’m so glad it worked pretty well for us today.”

Princeton’s reply was swift and direct, though, as forward Clara Roth slotted the ball past Frost less than a minute after Cobano’s goal.

Roth — the reigning Ivy League Offensive Player of the Year — continued to show off her quality, making a slaloming run from outside the shooting circle before whipping the ball beyond Frost and into the far post, pushing the Tigers ahead, 3-2.

“To open up the second half and get right on the board and dominate like that,” Meharg said, “and then take the foot off the pedal and be so disorganized and have to goals against us. That’s kind of a young team.”

Both goalkeepers made a series of impressive saves to keep the scoreline at 3-2. Baylis dove acrobatically to deflect Keus’ effort above the bar, while Frost dove quickly to deny midfielder Julianna Tornetta off a penalty corner.

As the game entered its final frame, it looked headed for a frantic conclusion. And the match’s frenzied nature was intensified after Roth was shown a green card early in the fourth, reducing the Tigers to 10 players for two minutes.

But the Terps struggled to create space, as the Princeton defense got compact in an effort to protect their goal advantage.

“One of the things that Princeton did do when they got a card was they started to play their top attackers in their backfield,” Meharg said.

In fact, the Terps failed to record a shot until the five-minute mark of the fourth. Cobano, the most threatening of Maryland’s attackers, forced a save out of Baylis, who pushed the ball into the path of midfielder Emma DeBerdine.

The freshman deflected the ball across the goalmouth, finding an unmarked Bibi Donraadt, who slotted the ball into the open net for the equalizer, sending her Terps’ teammates into a frenzy with less than five minutes remaining in regulation.

“Bibi’s definitely a person who can decide a game in the end,” Cobano said. “She plays very [well] when she has high pressure on her. … You can really rely on her in those situations.”

And just over 14 minutes of game time later, Bond’s second-effort goal had a similar effect on her teammates, pushing the Terps past an imposing Princeton squad.

“It’s really important to know that even if it does go into overtime, we can still put it away or we can come back from being a goal down,” Bond said. “That gives us a solid base to build on.”