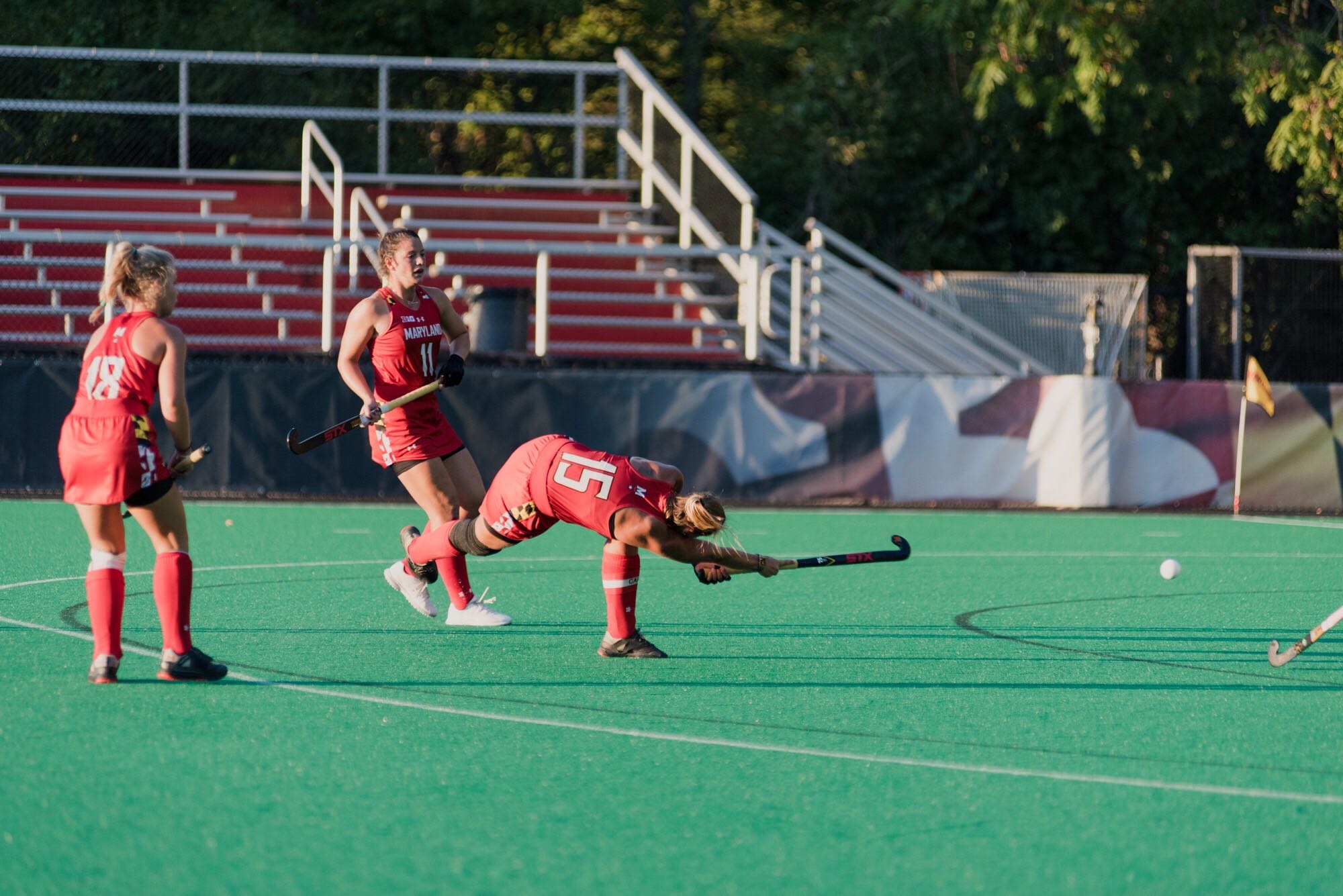 Noelle Frost knew what was coming.

Penn State’s penalty corner unit had just fired a shot past Frost, reducing Maryland field hockey’s lead to 3-1. And with the Nittany Lions creating yet another corner opportunity, the goalkeeper had an idea of what they’d attempt.

So when the ball shifted over to defender Anna Simon, the senior shot-stopper dove to her right, blocking off the bottom right corner.

Frost pushed the ball outside the cage, preserving Maryland’s two-goal lead. It was one of seven saves that Frost — the NFHCA’s Division I Defensive Player of the Week — would make in the fourth quarter to push the Terps to a tight 3-1 victory in their first Big Ten contest.

“In the fourth quarter, we kind of fell apart,” coach Missy Meharg said. “We got really sloppy … but all in all, I’m super pleased.”

[Read more: “You want to destroy it”: Maryland field hockey has set its sights on Penn State]

Both the Terps and the Nittany Lions struggled to create chances in the first quarter, recording a combined three shots.

Maryland probed around the midfield, hoping to open up shooting lanes for its midfielders and attackers. But Penn State proved resolute, getting bodies in front of the ball to greatly diminish the quality of its opposition’s chances. Defender Kelee Kepage fired an effort over the bar, while midfielder Madison Maguire saw her shot whisk over the cage as well.

“In the break between the first and second quarter, I said two things,” Meharg said. “‘Take your restarts as fast as you can … and go forward with the ball.’ … I think they responded very well.”

Consequently, the game opened up in the second frame, with the Nittany Lions flashing a speculative ball across Frost’s goal line. But midfielder Emma Spisak wasn’t able to get strong contact on it, with Frost sliding across the goal mouth to deflect Spisak’s shot away from the cage.

Two minutes later, the Terps would be on top, with Lepage forcing goalkeeper Brie Barraco into a save. Maguire was active around the cage, though, eventually flicking the ball past Barraco to give the Terps the lead.

And Maryland would add to its lead toward the end of the half, with defender Bodil Keus finding the net from yet another penalty corner.

“We have very powerful, potent players in those [penalty corner] spots,” Meharg said. “It was a good outcome.”

As the game progressed into the second half, Penn State tried to increase its influence. However, Maryland’s forwards and midfielders stifled its midfielders, keeping the ball in the Terps’ half.

Eventually, the Terps would extend their lead to three, as forward Mayv Clune tipped a wayward Keus shot into the back of the cage — her first score of the season.

“Mayv is a phenomenal field hockey player,” Meharg said, “She’s a goalscorer, so I’m not surprised.”

The Terps recorded seven shots in the third period, a testament to their attacking mindset. And that mindset helped limit Penn State’s creativity, with the Nittany Lions recording a sole shot in the frame.

Despite the seemingly insurmountable lead, Penn State continued to search for a goal. And the Nittany Lions were rewarded for their increased intensity, forcing seven penalty corners in the fourth.

“We started off pretty well,” Frost said. “Towards the end, we got a little uncomposed when it came to the number of corners we gave up.”

With six minutes left in the fourth, midfielder/defender Madison Hutson whipped the ball beyond an outstretched Frost to break up Frost’s clean sheet.

And just 20 seconds later, Simon rocketed the ball into the cage off of a penalty corner. However, the defender hit the ball above the backboard, meaning that the goal was disallowed.

But the Nittany Lions continued to push on, peppering Frost’s cage throughout the fourth. The senior was equal to each of their efforts, though, preserving Maryland’s 3-1 win to open Big Ten play.

“We need to … keep our composure,” Keus said. “We keep improving from game to game, but the next Princeton game, it needs to be a level up.”