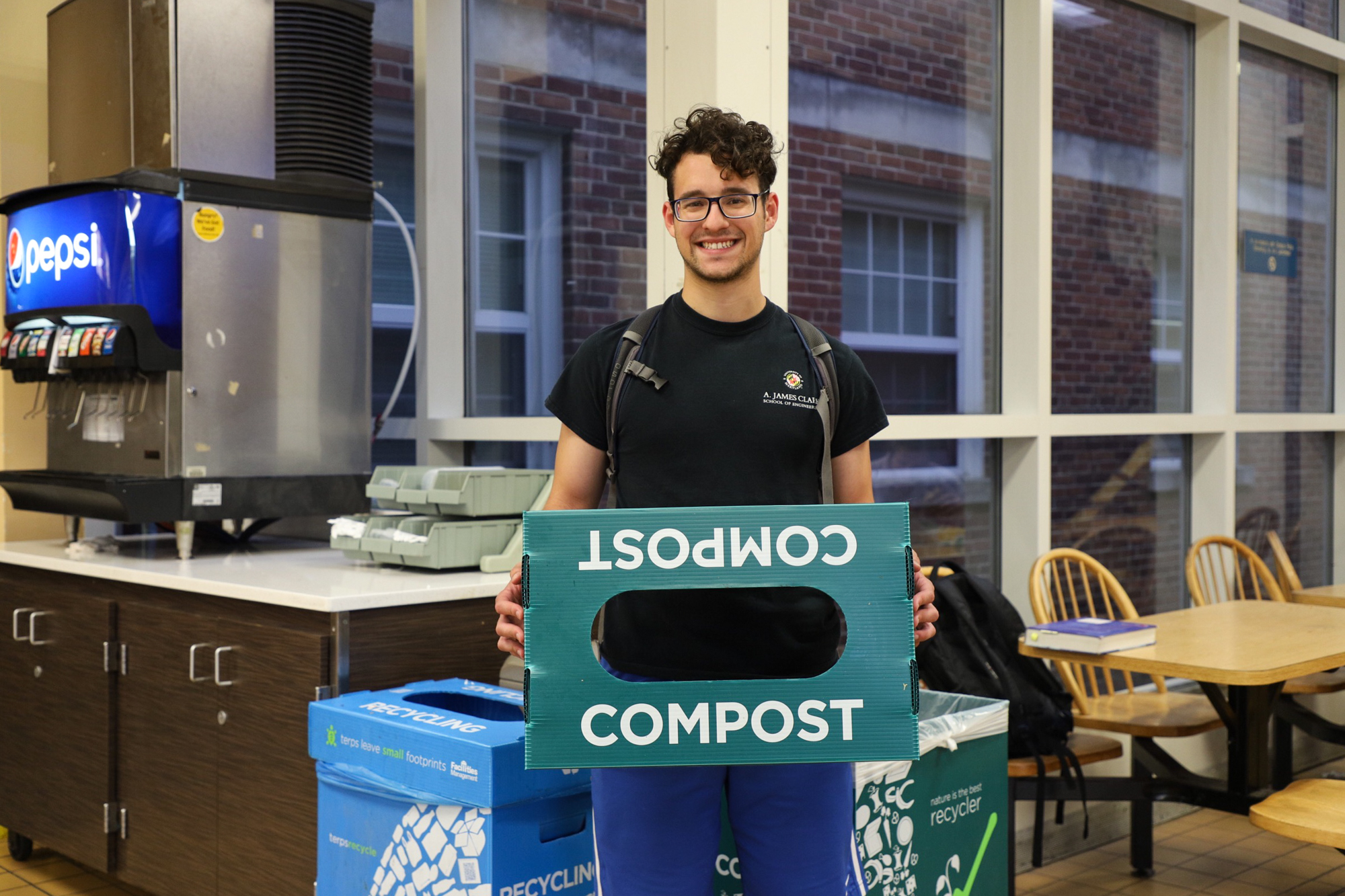 Brian Inzerillo holds up a lid of a compost bin in a student dining area, encouraging students to be more environmentally friendly. Green EDU is a program aimed at educating incoming students at this university on sustainable ways of living. (Evan Kramer/The Diamondback)

A pilot version of GreenEdu — an online training program designed to teach incoming University of Maryland students about sustainability practices — is set to be ready by fall 2020.

The Department of Resident Life developed the program in an effort to teach students about waste sorting, composting and reducing their carbon footprints on campus. It will be similar to current online modules like AlcoholEdu.

“I think most people want to do the right thing, and they want to minimize their usage and do what they can,” Julian Chiveral, the Residence Hall Association’s vice president, said. “Having that knowledge is important right now.”

Lisa Alexander, Resident Life’s coordinator of sustainability programs, said she hopes the department can officially roll it out by 2021. By this October, Alexander hopes to have a prototype to show to campus partners for feedback from the Residential Hall Association sustainability committee.

Although the RHA had hoped to have a pilot prototype for the North Campus community by this fall, the program’s progress slowed due to a search for the best computer program to construct it, Alexander said, as well as the need for more direction and scripting to guide its development.

Sharon Rosenblum, a physiology and neurobiology major, said she thinks the course would be beneficial for students who want to be environmentally friendly, but don’t always know how. She said she regularly has trouble identifying which materials are recyclable and which aren’t.

“It would be good if we have a course explaining that,” she said. “I get confused pretty much every day in terms of what goes where.”

Resident Life’s creative service unit will be animating and bringing the program to life this year after the sustainability committee created a storyboard last year to outline it.

[Read more: A UMD student is working on a device to curb unnecessary toilet-flushing]

Unlike AlcoholEdu and Sexual Assault Prevention training, students who do not take GreenEdu will not face repercussions when seeking on-campus housing, Alexander said. Instead, the program will have incentives — possibly a certificate.

Calvin Burns, former chairperson of the RHA’s sustainability committee’s, said he hopes the group will do more.

“We would hope to give the same sort teeth to GreenEdu to make it mandatory — not only in name, but in practice,” he said.

By 2020, the university hopes to have reduced its carbon footprint by half if its 2005 levels. The goal is considered a benchmark on the way to the ultimate aim to be carbon neutral by 2050.

GreenEDU’s interactive online video service will be broken down into several parts.

The module begins with a video that aims to give students the context on why sustainability matters. Then it focuses on behavioral change. There are sections on water, energy, food and transportation, as well as an interactive waste-sorting module.

The individual is tasked to sort waste into trash, recycling, or composting. The section is meant to help decrease the contamination of recycling and compost bins that ultimately dooms their contents to landfills, and the last section of GreenEdu will have a list of sustainability resources on the campus.

“Waste sorting is different in every county in Maryland, every state in the United States, and every country in the world,” Alexander said. “So there’s this confusion when you come to a place where there are rules that are different from where you’re from.”

CORRECTION: Due to an editing error, a previous version of this story’s excerpt incorrectly stated the RHA is developing a module called GreenEdu. The Department of Resident Life developed the module. This story has been updated.