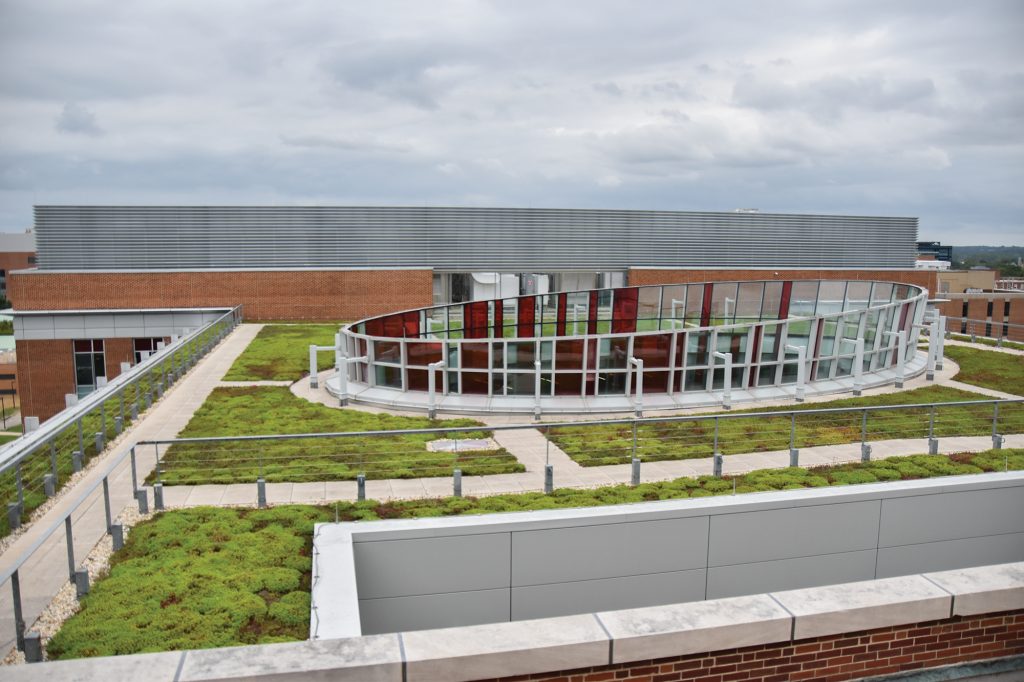 The green roof at the top of the Physical Sciences Complex is just one among many around campus that serve as drainage and an ecosystem. (Joe Ryan/The Diamondback)

With the help of University of Maryland researchers, farms across Washington, D.C., are taking watermelons, cucumbers and cherry tomatoes to the next level: the roof.

John Lea-Cox, a plant science and landscape architecture professor at this university, and Andrew Ristvey, an affiliate faculty in the department, are working with the D.C.-based farming foundation Up Top Acres to grow crops on urban rooftops.

Kristof Grina, co-founder and farm director of Up Top Acres, said he initially connected with Lea-Cox and Ristvey a few years ago for help with research and data collection surrounding stormwater management and water retention on their rooftop farms.

Lea-Cox and his team monitor the rainfall, soil temperature and soil moisture on Up Top Acres’ rooftop farms, Grina said. Lea-Cox said he was impressed by the quality of the rooftop produce, which grows across eight farms in Maryland and D.C. The crops are delivered to restaurants downstairs or sold in a community-supported agriculture system.

“There’s like a little bit of Little Italy on the roof down in D.C.,” Lea-Cox said.

[Read more: UMD is part of  a group advising a protested telescope in Hawaii]

Relish Catering, a catering company in North Bethesda, started working with Up Top Acres about a year ago. The company operates about half a mile away from the rooftop farm at Pike and Rose.

The rooftop farm cuts transportation costs for the company, said chef Laura Calderone, since it’s both walkable and bikeable. When she needs ten pounds of pea shoots, for example, she can just load them in her backpack.

“They will literally pick it that morning, and it is going out to our clients that afternoon for the following day,” Calderone said. “Sometimes there are still bugs in it that are moving around, but that’s okay.”

“Their greens are sweeter and they are not as fibrous,” Calderone said. “You don’t have to manipulate it much. We can let it shine as it is.”

This university’s researchers collect data that gives the farm’s operators “better insight” into how the systems are functioning, Grina said. It lets them know how they’re doing with irrigation practices, and can spur ideas for design improvement.

Lea-Cox and his team also monitor nitrogen and phosphorus levels in the crops. An excess of these nutrients can runoff into local waterways and trigger excessive algae growth. When algae grows too quickly and too abundantly, oxygen levels decline, ultimately killing the fish.

La Betty, an American-style restaurant on K Street in D.C., featured wild rooftop-sourced bouquets on the tabletops. Owner and head of operations Tessa Velazquez said that the flowers last longer than alternatives.

“The story behind it is great,” Velazquez said. “To say that we’re featuring local farmed flowers makes us feel good, makes our customers excited … they’re beautiful and they’re colorful and you really just get that sense of how natural and fresh that they are.”

La Betty is located about two miles from Up Top Acres’ 55 M Street farm in the Capitol Riverfront neighborhood, which opened in 2016. Soon, Velazquez said, she hopes to feature produce from a rooftop farm on her menu.

“I love that they’re actually engaged with the community, as well as really trying to bring that fresh farm-to-table experience — which is a fuzzy term, but they’re really doing it,” Velazquez said. “They’re your neighbors. They’re down the street. They’re not two hours away in Pennsylvania, they are really here.”