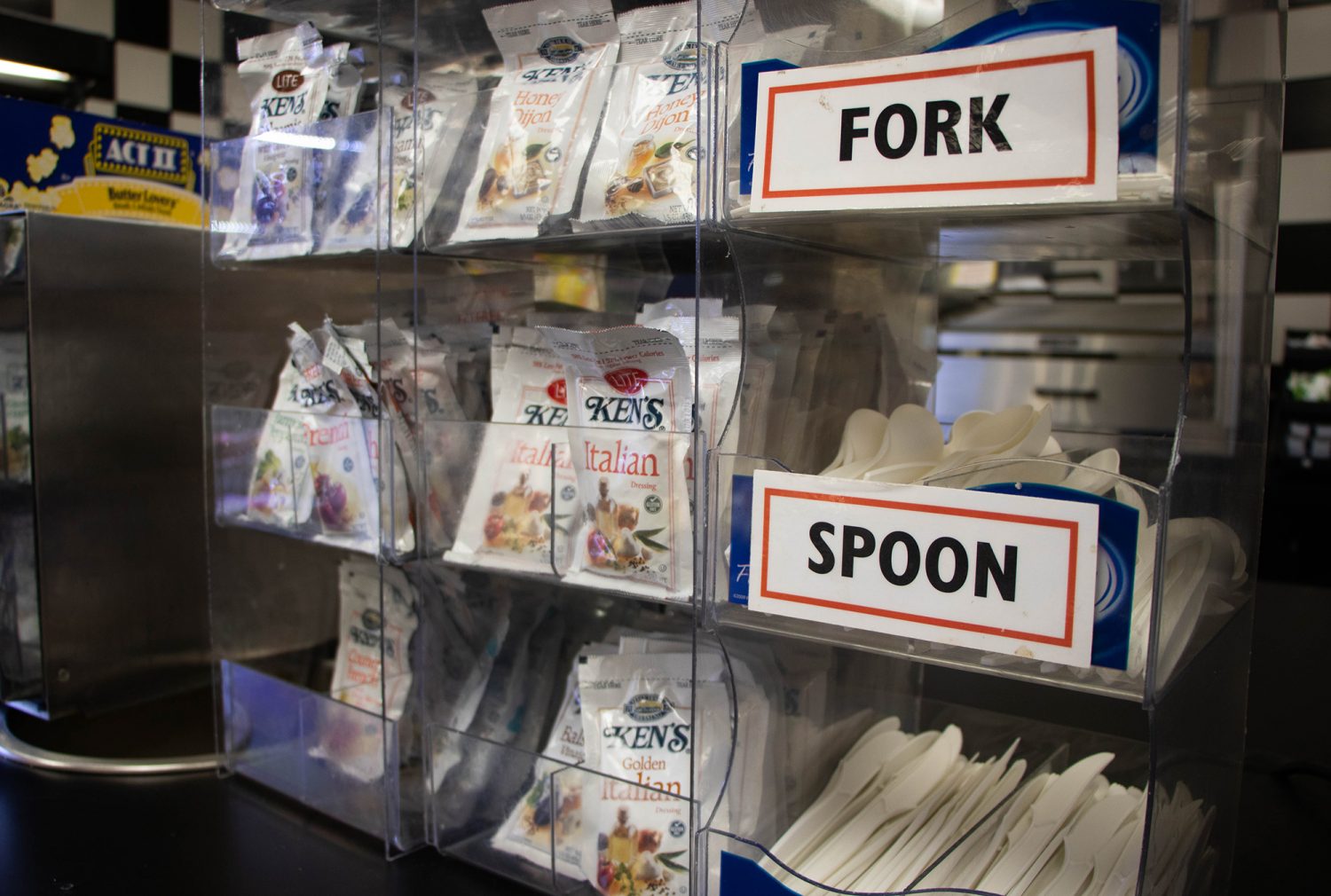 Plastic utensils in the Commons Shop. The Department of Dining Services received the largest grant awarded this year for its plastic waste reduction program, which it hopes to expand campuswide. (Julia Nikhinson/The Diamondback)

The University of Maryland awarded more than $450,000 in grants to 17 projects that will work to promote sustainability initiatives on the campus and toward carbon neutrality, the Office of Sustainability announced Monday.

This is the largest sum that has ever been awarded through the fund, which has been allocating money for sustainability projects since 2011. Since then, the fund has awarded more than $2 million in grants to over 137 projects, said Andrew Muir, an Office of Sustainability spokesperson.

“Sometimes, there just aren’t enough projects that merit funding,” said Amelia Avis, the Student Government Association’s sustainability director. “But this is probably the closest we’ve come to awarding all of our funding in recent years.”

The fund’s money comes from a mandatory undergraduate student sustainability fee of $12 annually that students pay alongside their tuition. This year, groups and departments on campus applied for more than $1 million in funding from the Sustainability Fund, but there was only about $475,000 available, said Avis, who is also the chair of the fund’s review committee.

The largest grant awarded this year was $150,000 to the Department of Dining Services for their plastic waste reduction program.

Though Dining Services assistant director Bart Hipple said the department significantly reduced their waste a few years ago when they switched dining plans from an a-la-carte system with plastic carryout containers to an anytime dining plan with no carryout options, their new goal is to reduce single-use plastics campus-wide.

They plan to swap out hard plastic utensils for compostable ones and replace plastic bags with paper or reusable ones, Hipple said. And while Dining Services will offer paper straws instead of plastic ones, they hope students will recognize that they don’t always need a straw, and should only take one when absolutely necessary, he added.

“We’re being contacted frequently on campus by students that really want plastic straws eliminated,” Hipple said, “So, I have evidence that the students at this university are ready for this initiative.”

Other grant money went to the Department of Environmental Science and Technology, which received $61,570 to fund the production of its algal “Terp” scrubber. The department plans to install the device — which will collect and filter water to facilitate the growth of algae, removing toxins — in a new rain garden on campus. In addition, this university’s National Center for Smart Growth received $42,710 for their initiative to collect and analyze stormwater management data.

And the SGA received $50,000 for efforts to offset the carbon footprint of undergraduate commuters.

Avis worked with SGA President Jonathan Allen on a proposal for funds after the Fourth National Climate Assessment. The report, released in November, said global carbon emissions would have to be significantly reduced “well before 2040” to stabilize the global temperature.

“From reading that report and seeing the scale of action that was needed worldwide, [we realized] the university carbon goals were not sufficient,” Avis said.

The SGA grant will support programs like tree-planting and capturing toxic methane at landfills to neutralize the effects of carbon emissions produced by undergraduate student commuters who drive to and from the campus.

“It’s a big statement that we wanted to make to the university that we are all in for climate action,” Avis said.

Applications for the grants are reviewed by the Sustainability Fund Review Committee, which is made up of at least three students and two staff members. The group reviews and votes on applications and then passes them along to the full Sustainability Council, made up of faculty and staff, which ultimately decides which projects to fund.

The initial review committee is made up primarily of students because they are representatives of the population paying the sustainability student fees.