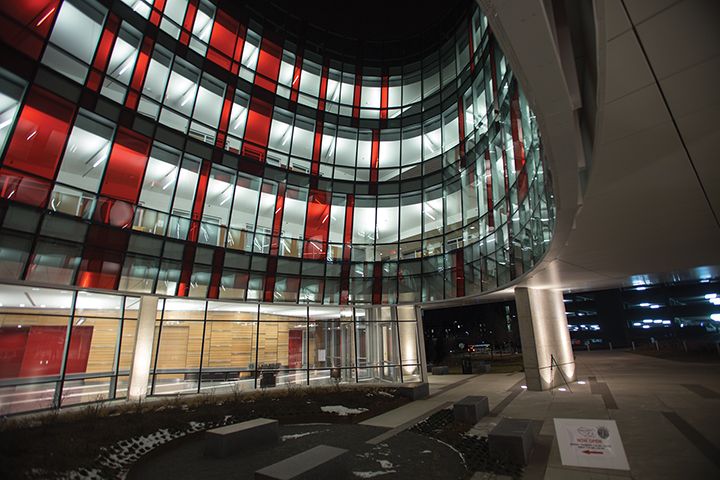 The Physical Sciences Complex houses most of the astronomy department. The University of Maryland is part of AURA, an outside adviser to the Thirty Meter Telescope's board. (File photo/The Diamondback)

An indigenous people’s advocate recently called out institutions helping to advise the science behind a telescope on Hawaii’s highest mountain — one of which is the University of Maryland.

Protests over the Thirty Meter Telescope project have been ongoing in Mauna Kea, Hawaii, where astronomers hope to erect what would be the world’s largest telescope. Native Hawaiians seek to stop its construction on the land, considered sacred ground by some.

The billion dollar project is being built by the TMT International Observatory, a nonprofit organization composed of universities and institutions in the United States, Japan, China, India and Canada. This university is part of the Association of Universities for Research in Astronomy, which is an associate member and outside adviser to the TMT board for the United States’ scientific interests.

“[AURA members] are just as complicit,” said Krystal Two Bulls, a Native American and indigenous peoples’ advocate, who is among the protestors in Mauna Kea.

While university and AURA representatives say AURA and its member institutions have no input on the actual construction of the telescope, Two Bulls said they could play a larger role.

Two Bulls said she thinks AURA —  composed of 47 universities and institutions and three international affiliates — have a responsibility to advise the TMT board against building on the mountain.

“Everything that we are, our very identities and the fabric of our communities, comes from the land and our relationship to it. So, for there to be an attempt to build the world’s largest telescope on top of this mountain, Mauna Kea, it’s heartbreaking,” she said. “It tears at your soul.”

[Read more: This UMD drone could revolutionize how donor organs are delivered]

This university joined AURA in 1986, according to Leon Tune, a university spokesperson.

Stuart Vogel, this university’s delegate to AURA, emphasized that the TMT Board, which AURA is not a part of, “makes all the decisions.”

“The AURA Board does appoint people to the TMT Science Advisor Committee, but the SAC just provides scientific advice for the TMT Board to consider,” Vogel wrote in an email.

When asked about whether he agrees with TMT’s decision to build the telescope, Vogel wrote he thought the people of Hawaii should decide what happens regarding construction on the mountain.

Over the past few weeks, more than 2,000 people have gathered to protest the telescope’s construction, camping out at the base of the mountain’s summit, blocking the road to the construction site. The group prefers to be referred to as “protectors.”

“They’re not protesting anything. They are protecting, and they are standing for the right as the original stewards of this land: the right to have access to their sacred mountain, undisturbed,” Two Bulls said.

TMT selected Mauna Kea as the telescope site in 2009, according to the New York Times. Construction was originally set to begin in 2014 but was delayed due to protests and court cases. The telescope is now scheduled to be operational July 2027, according to TMT’s website.

With ongoing protests, TMT has begun looking into other options for the site of the telescope. The group is applying for a permit to build in the Canary Islands as a back-up plan, the Associated Press reported.

In terms of its scientific value, Mauna Kea is “the best optical site in the Northern Hemisphere,” Alberto Bolatto, an astronomy professor at this university, wrote in an email.

“I tend to see not building TMT as a net loss,” Bolatto said. “It’d be a loss to science in general, and to U.S. science in particular.”

Bolatto added that he sympathized “with respecting cultural heritages.”

AURA spokesperson Shari Lifson wrote in an email that the group’s role has been to “advise on the science for such a facility, not the implementation,” declining to comment on whether AURA is supportive of TMT’s decision to construct on Mauna Kea.

As for the protectors, Two Bulls said it means everything to the Native Hawaiians to be on the ground protecting the mountain.