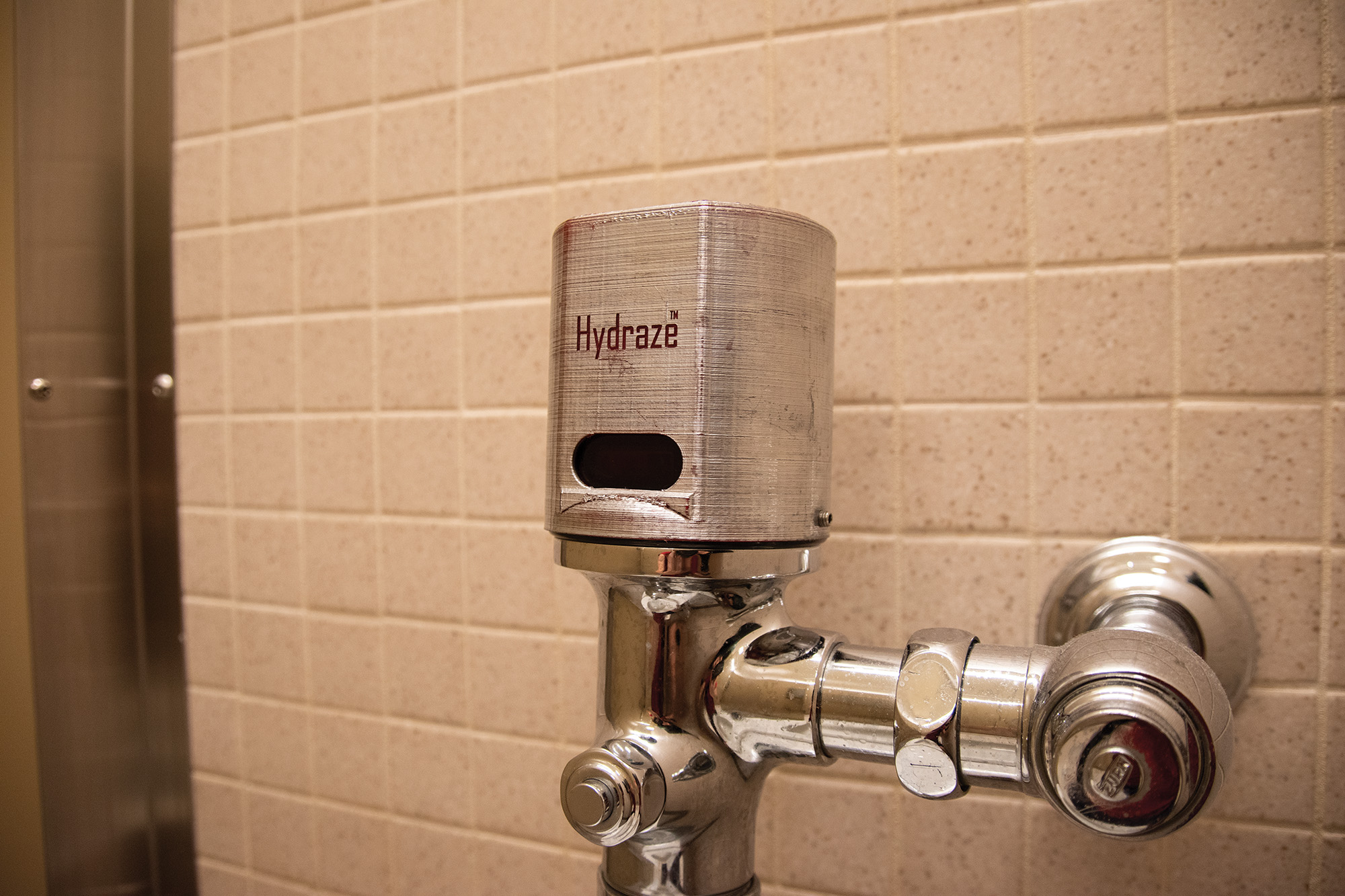 A water conservation device inside a men's bathroom in the Clarice Performing Arts Center. The device is designed to count the amount of flushes regularly. (Joe Ryan/The Diamondback)

That’s when it hit him.

“I was just in the heat of exams,” the senior mechanical engineering major said. “I was stressed and it [flushed], like one too many times, and I’m finally like, ‘You know what, I’m an engineer, I’m just going to figure out a way to fix it.’”

Now, Grody is the founder and CEO of Hydraze, a water conservation company designed for use in commercial buildings. While most automatic-flush toilets use a distance sensor, Hydraze devices control flushes from a mechanism attached to the stall’s door latch.

The goal, he said, is to design and market devices that would automatically flush the toilet once when a user exits the stall.

[Read more: UMD is part of a group advising a protested telescope in Hawaii]

Grody started testing Hydraze devices for data collection in bathroom stalls at The Clarice Smith Performing Arts Center this summer. He and his team installed two devices in each designated Hydraze stall.

The first device is a flush counter, which tallies each automatic flush. The second device, called a latch counter, counts the number of times the stall door unlatches.

By subtracting the total number of automatic flushes from the number detected on the latch counter, Grody was able to identify the number of unnecessary flushes — known as “phantom flushes.”

The phantom flush percentage in The Clarice ranged from 41 percent to 67 percent across two test periods in June and July. Grody roughly estimates that there is about $2 million worth of water wasted on campus per year due to the problem.

Hydraze has amassed a total of $16,000 from the Office of Sustainability, the Do Good Institute and a pitch competition in his entrepreneurship class, Grody said. The team, which includes other students, plans to use the money for more prototyping and manufacturing. Grody has a provisional patent for the device.

[Read more: This UMD drone could revolutionize how donor organs are delivered]

This past spring, Grody earned first prize in the university’s Do Good Challenge’s venture category. Toby Egan, faculty director at the Do Good Institute, said that Grody is the most “advanced” Do Good Challenge winner he’s worked with.

“He is very value-minded and socially-oriented, and he’s a very strong communicator and thinker,” Egan said. “It’s easier to find one or two people who have two of those characteristics, but to have a number of the characteristics is really nearly the full package.”

Bill Brandwein, operations and facilities manager at The Clarice, said Grody’s ambition in developing the prototypes helped him succeed.

“When he gave the presentation and had the ability to say, ‘They’re right outside, right now,’ that was a plus,” Brandwein said.

The Clarice was an ideal place for Hydraze testing because the building has multiple types of bathroom use, Brandwein said. Academic areas at The Clarice are in “peak demand” because students use it between classes, while backstage areas have “brief periods of intense use” and public areas are characterized by routine use during the day, but can get “60 people through in three minutes” at night, he said.

Grody temporarily removed flush and latch counters from stalls in The Clarice after initial data collection, but plans to install them again for the same purpose in November.

“The whole process of using a toilet is kind of weird to think about,” Grody said. “But if we want to save water, then we’ve got to figure out what the best metric to determine what a flush is.”