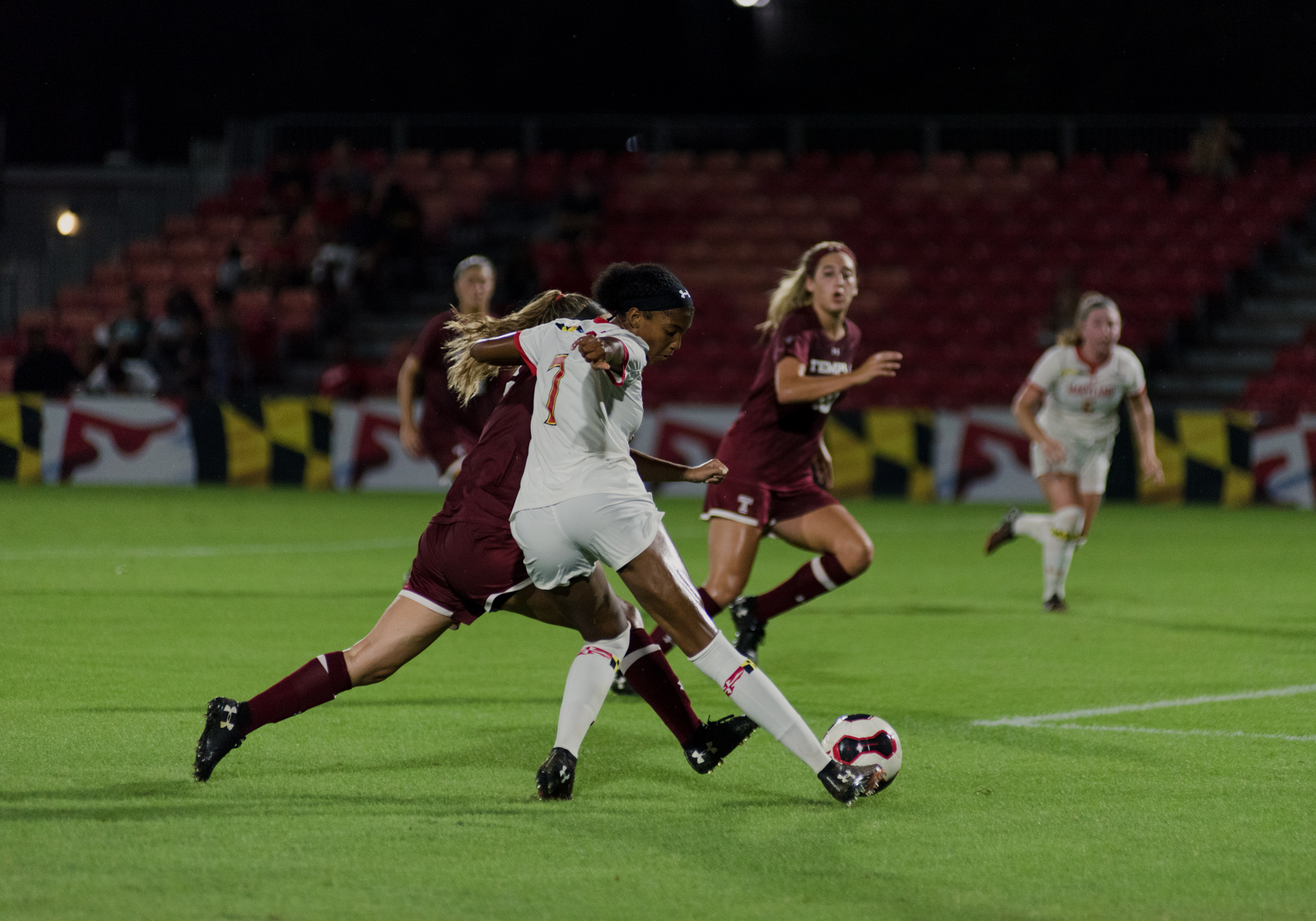 Alyssa Poarch and Jlon Flippens were still smiling by the time Sunday’s post-match press conference began as they thought back to the connection between them that resulted in the first of three goals for Maryland women’s soccer against Princeton.

The 3-0 win got the Terps back on track after consecutive draws. But there was more at play for Flippens, her teammates and their coach.

The win over the Tigers kept Maryland undefeated at home, marked Flippens’ season debut — which she ended with two assists — and gave coach Ray Leone his 300th career collegiate victory, a mark only 26 other active coaches have achieved. The factors all combined to form an emotional, gratifying game for the Terps.

“We’re super proud of him,” Flippens said of Leone. “To do it today with the opponent we had, a shutout, my first game back, it was a lot of emotions. We’re super excited. He’s so selfless. He put us first always, so it was a good chance for him to have the spotlight for once.”

Leone began coaching in 1986 for Berry College, where he earned the distinction of being the only coach to take a first-year program to an NAIA national championship game. His squad won the title the following year and proceeded to make another Final Four appearance the next season.

He left Berry in 1989 to found the Creighton women’s soccer program. From there, he held assistant and full-time coaching positions at Clemson and Arizona State, combining for a 93-55-17 record. After six years helming the Sun Devils, he accepted a head coaching job at Harvard in 2007, where he brought the Crimson to their first Ivy League Championship since 1999 and their first NCAA tournament berth since 2004.

Leone would coach Harvard for nine seasons, racking up five Ivy League Championships during his time there and never finishing with a losing record.

“It’s hard [to describe],” Leone said. “Because when I told [the team] it’s not about me, it’s about all the girls I’ve coached. I’ve been thinking about that — the first team, my Berry College girls, all they meant to me — I wouldn’t be here without any of them.”

After winning one of the biggest games of his tenure at Maryland — against a highly-touted Tigers side on the edge of the United Soccer Coaches poll — Leone believes his team is capable of competing in any matchup if they play smart and communicate.

And with Sunday’s win, the Terps finished their non-conference slate undefeated at home, recording wins over Princeton, George Mason, Georgia Southern and New Jersey Institute of Technology and a draw with Temple.

“Protecting our house is our main goal for this year,” Poarch said.

Sunday also marked Flippens’ return to a Maryland squad that has had to make ample changes to the starting lineup this season. But after an impressive debut, she looks to have found her way into the lineup.

“It was fun for the team,” Leone said about Flippens performance. “It definitely gave an emotional lift to our group. I was really happy for her.”

Flippens and Poarch linked up all game, and they talked about how happy they were to be playing together. Although they have spent almost three years on the team together, this was only the third time they had taken the field in the same game.

Poarch spent her first year as a redshirt as she recovered from an injury, and Flippens later went down with her own injury just two games into the 2018 season. So as Flippens returned and Leone notched his 300th career win, Maryland goes into the Big Ten play on the back of an uplifting performance.

“There was a lot of emotion,” Poarch said. “This was Jlon’s first game back, for her to just play me that ball over the top, and for me to finish, it was a great experience.”