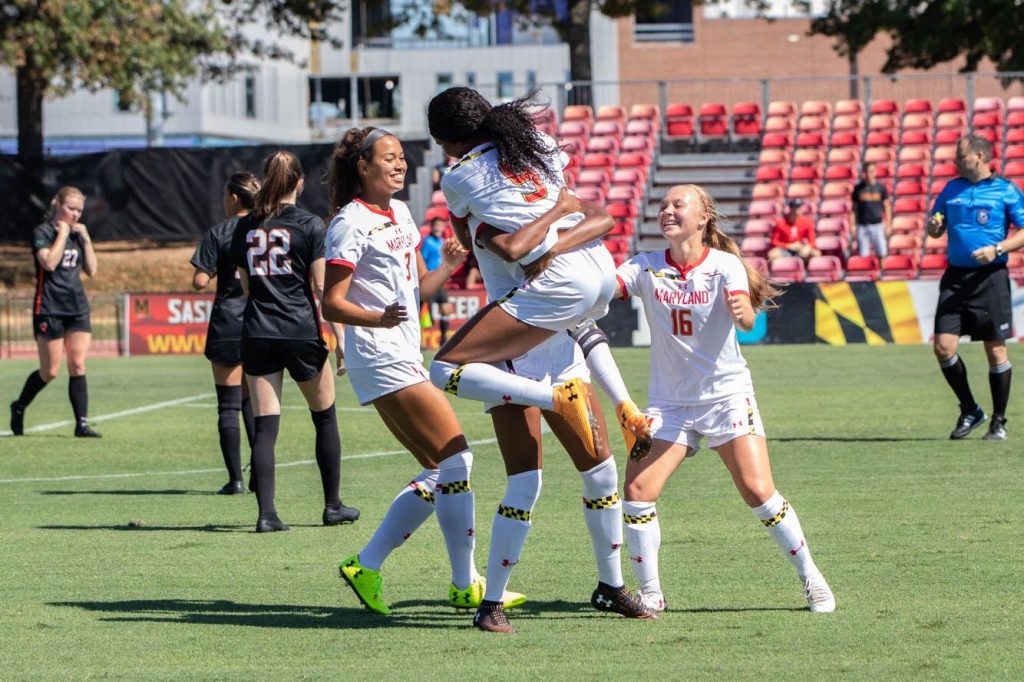 Midfielder Jlon Flippens looked up the field and saw forward Alyssa Poarch marked by just one defender, so she booted a ball in the air toward the striker.

Poarch reeled it in, taking a touch and using her speed to shed the defender. And with the ball in front of her and just the goalkeeper to beat, she capitalized with a low shot to the far post.

As the back of the net rippled, Poarch turned, smiled and ran to hug forward Keyera Wynn as she celebrated the first of the two goals she would score Sunday, helping the Terps topple Princeton, 3-0, and giving coach Ray Leone his 300th career collegiate coaching victory.

“There was a lot of emotion,” Poarch said. “This was Jlon [Flippen’s] first game back, for her to just play me that ball over the top and for me to finish it was a great experience.”

The Terps looked to come back in a big way after settling for a tie against Temple on Thursday, surrendering a goal in the last minute to spoil what at the time looked like Leone’s 300th win.

On Sunday, the Terps helped Leone accomplish the feat against a formidable Princeton team. The Tigers were coming off a 4-3 loss in overtime to No.15 Georgetown, conceding the golden goal in the opening minute of extra time. Entering this weekend’s games, Princeton found itself just outside the United Soccer Coaches Top 25, sitting at No. 32.

The Terps have constantly tried to open games quickly, and Poarch made a statement early on. In the fifth minute, she controlled a long ball from Flippens and ran with it, making her way past the last Princeton defender and slotting in the opening goal of the contest.

“It gives me confidence in future games,” Flippens said. “Not only in myself but in my teammates. We connect really well on the field. It was good connecting with [Poarch].”

Maryland continued to dominate the game offensively early on, nearly doubling its lead in the 17th minute off a corner kick from Flippens, who was active in her season debut. Her ball found the head of midfielder Adalee Broadbent, but the shot took a deflection from a Tiger defender to thwart the Terps’ chance at a goal.

Just 30 seconds later, it was Poarch again finding the back of the net — this time on an individual effort. After bringing down a goal kick, she turned and ran through the Princeton defense, cutting into the midfield just outside of the box and blasting a shot into the far bottom corner of the goal to double Maryland’s lead.

“They were more composed,” Leone said. “I think we’ve been taking a lot of dream shots. We got closer and it was just a little more dangerous. They took a breath when they were near the box. That’s what you have to do when you’re a finisher.”

The Terps’ offense didn’t stop there, continuing to force save after save from goalkeeper Natalie Grossi. Midfielder Hope Lewandoski found a chance of her own just a few minutes after coming on as a substitute. Lewandoski found herself with space on the far side of the field off a pass from Poarch, but the resulting shot was saved by Grossi.

Princeton found most of its opportunities in the first half from corner kicks. Maryland always had an answer, though, holding the Tigers without a shot on target throughout the first half.

As the two squads went back and forth to close the half, the 2-0 scoreline at the end of the first 45 minutes ultimately told the story of Maryland’s dominance.

The second half opened with a dangerous chance for the Tigers as forward Grace Sherman hit the crossbar on a curling shot from outside the box. Sherman scored two of Princeton’s goals on Thursday.

The Tigers controlled play early in the second half, keeping Maryland off their side of the field. And although a pass from Lewandoski found forward Emily McNesby clean through the Princeton backline, Grossi made the routine save.

The Terps found their next chance in the 76th minute when forward Mikayla Dayes’ cross found McNesby at the back of the net after two Tiger defenders couldn’t get in front of it, but the shot went into the side netting.

McNesby did not waste her next chance, finishing her first goal of the season from a header by Flippens that took a bounce over the heads of the Princeton defense. And McNesby got on the end of it before beating the keeper with her shot to the far post.

“It shows how cohesive we can be if we stay patient on the ball,” Flippens said. “We always bring the effort, but we finish our chances, and we put on an exciting performance.”

In the end, Maryland strung together its biggest win of the season in convincing fashion and helped Leone bring home his 300th victory.

“This was a really important game for us,” Leone said. “I’m sure there was a lot of doubt but they believed in themselves and really performed. It was obviously their best performance.”