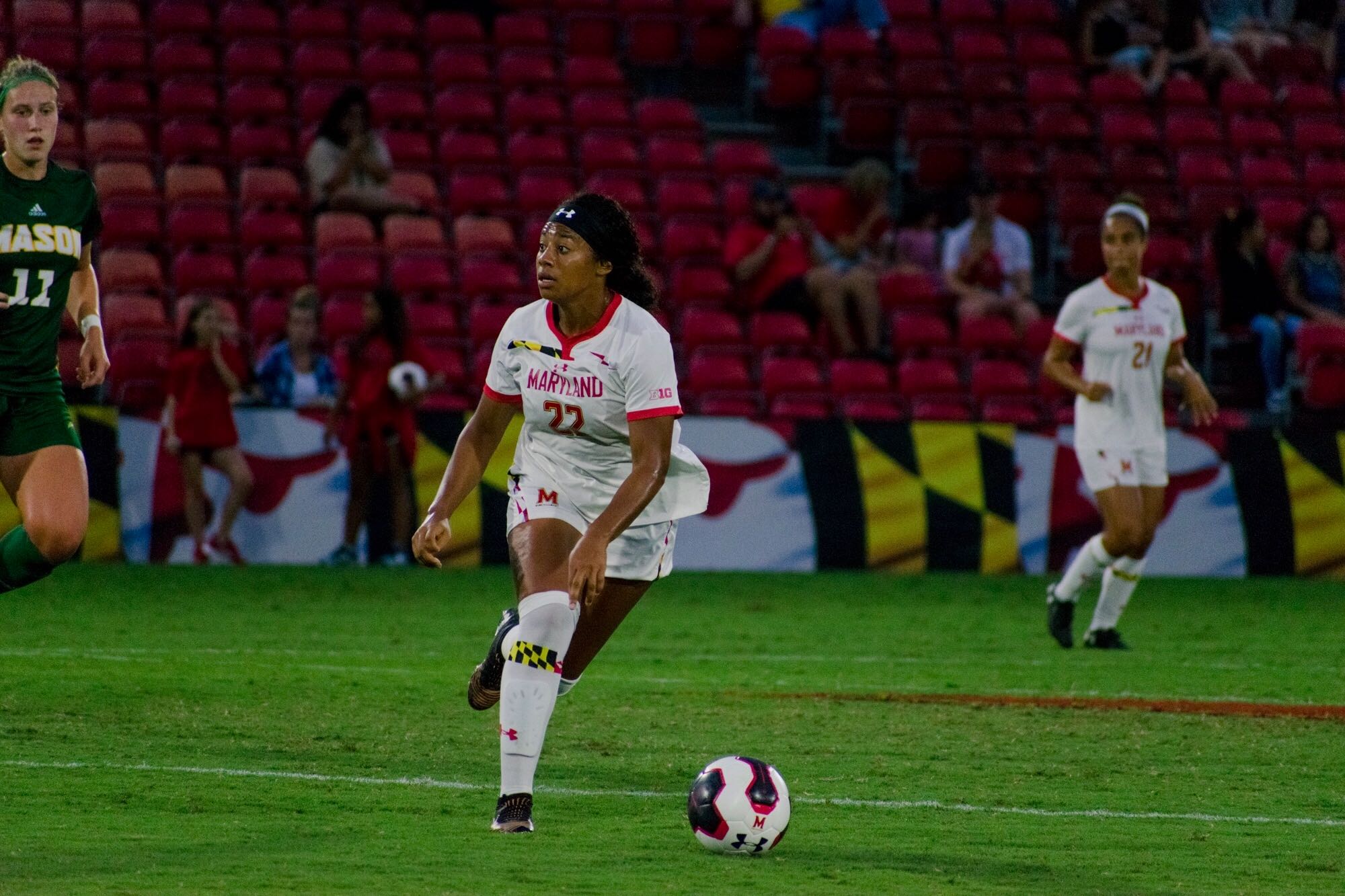 Once Maryland women’s soccer defender Alexis Hogarth’s looping ball wound up in the back of the net, she put her hands out and shrugged.

It wasn’t clear if her long ball from well outside the 18-yard box on the left wing was meant to challenge George Mason goalkeeper Morgan Symmers or if it was designated for one of the two Terps in the area.

Regardless, the goal — floating into the upper right corner of the net and just out of Symmers’ reach —  was the junior’s first as a Terp. And the effort, however innocuous it first seemed, helped put the finishing touches on a dominant 3-0 win in College Park over the Patriots.

“[It’s] pretty awesome,” Hogarth said. “Usually when you’re the outside back you’re known for the assists or helping start the play, but getting a goal is definitely a nice feeling. It’s nice to feel like the forwards once in a while.”

Maryland rebounded from a two-game losing streak to thump the Patriots in a stifling defensive display. The Terps held George Mason to one shot while attempting 19 of their own, keeping coach Ray Leone’s squad undefeated at home this season.

Maryland (3-2-0) came off two losses against Georgia and Auburn, in which they fell by a combined 9-0 scoreline. But against a winless George Mason (0-3-1) side, the Terps had little issue getting back in the win column.

Midfielder Loren Sefcik had the first chance of the game off of a chip ball from midfielder Darby Moore. Sefcik ran past the Patriots’ defense to see her first strike of the night go over the bar.

The Terps continued to pressure George Mason, earning two corner kicks in quick succession. Both attempts were handled by the defense, but the ball stayed in Maryland’s attacking third, opening an opportunity for forward Alyssa Poarch to give Maryland the early lead.

Poarch tried to control a pass from midfielder Sydney Staier but was dispossessed. A poor touch from the defender gave Poarch a chance to grab the ball and run through the defenders to slot away her first goal since the first game of the season.

The Patriots began to stay back after conceding the opening goal, offering Maryland a slew of opportunities.

“They were just more aware of the spaces today,” coach Ray Leone said. “That’s what the game is really about. These teams are so good and tactical, you’ve got to find where you can go and get at them.”

After a poor pass from George Mason fell directly to the feet of Sefcik, she booted a ball ahead to forward Mikayla Dayes. Her attempt to score on the volley flew well over the bar. A few minutes later, the Terps made the Patriots defense nervous again, putting in a corner ball that sailed right in front of goal — but no Maryland foot could get a shot away.

The rest of the half was played largely through the midfield. Neither team could quite put together another opportunity, though. George Mason finally found its first shot in the 42nd minute on a free kick just outside the box, but the attempt sailed over.

The half ended with the Terps up 1-0, outshooting the Patriots 10-1.

In the second half, the Terps came out fast with Poarch registering a shot just a minute in from outside the box, forcing a save out of Symmers. Dayes nearly found the second goal of the night for the Terps as she fought through the Patriots’ defense in the box only to find her shot go behind the net.

Forward Keyera Wynn nearly found the first goal of her career in the 67th minute after a well-placed cross from midfielder Hope Lewandoski landed right at her feet, but the keeper was just able to get her body in front of the ball.

Five minutes afterward, Hogarth found space along the far side of the pitch and launched a ball that found the top-right corner.

“To see her experience and also see the team get behind her and be happy for her,” coach Leone said. “I saw a lot of that going on today. On the bench, there was a lot of good feelings of the people out there.”

Dayes tacked on the final goal of the night running down the far side before cutting into the box and striking the ball past the keeper giving the Terps the 3-0 advantage they saw through to the end of the match.

“The main thing we think about is protecting this house and protecting this field,” Poarch said. “That was a goal for us this season. We wanted to be undefeated here at home.”