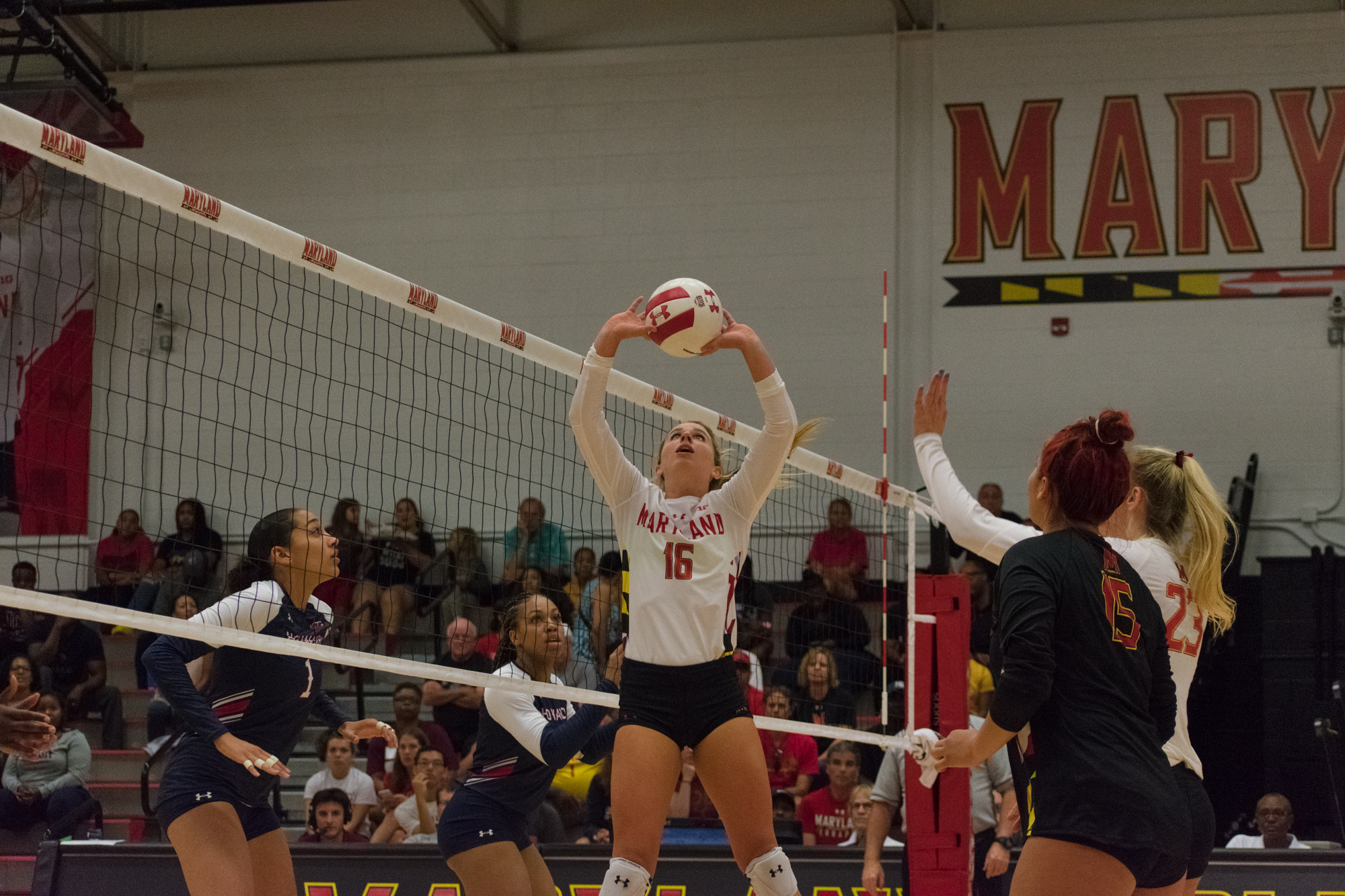 Howard had scored four of the last nine points, narrowing Maryland volleyball’s sizable fifth-set lead. But when middle blocker Katie Myers hammered home a kill to end the Bison run, she paved the way for the Terps.

“It was nice to have the crowd there at the end to give us an extra push,” Hughes said.

Outside hitter Erika Pritchard again stood out, posting a team-high 17 kills. But it was freshman pin hitter Rebekah Rath’s 12-kill contribution that helped separate the sides at the Xfinity Center Pavilion.

The Terps got off to a slow start in set one, while Pritchard struggled to put away her hits. And later, multiple service errors kept Maryland from pulling away, causing Hughes to use his second timeout after Howard went on a 4-0 run to give the Bison a 20-19 lead in the first set.

But the Terps rebounded after the timeout, scoring six of the next nine points, to take the frame. Myers, who finished with nine putaways, added an ace to the mix during the first-set comeback.

The team acknowledged that their poor serving kept Howard in the match. They finished with 26 total errors, three more than their last five-game match.

“We pride ourselves on being a good serving team,” Hughes said. “So when we didn’t do that tonight, it got under our skin.”

Maryland collected itself in the second set, allowing Pritchard and outside hitter Emma Schriner to make things happen on the floor. The Terps led 24-20 and appeared poised to take a two-set advantage.

But a service error from Pritchard coupled with a slew of mishaps gave Howard six straight points and a 26-24 set win.

“When we had the lead at the end of set two, we let their side take control,” Myers said. “After we lost, we just wanted to wash it and move on to the next one.”

Two kills in a row from middle blocker Rainelle Jones put Maryland up 8-3 in the third set, and it stayed ahead with ease. And later, Myers finished off the 25-16 set win with a kill, triggering a fist pump from Hughes.

Pritchard and Rath hit back-to-back kills to open the fourth set, but Maryland couldn’t press on from its dominance one frame earlier. Howard ended the set on a 9-2 run, putting pressure on the Terps in the decisive fifth set.

Pritchard notched three kills in the final frame, but it was Rath who forced Howard into a blocking error on her final kill, handing Maryland a 15-9 fifth-set win to cap an up-and-down home debut.

“Our strength is in the team,” Rath said. “So if we all put our minds to something, we will execute.”