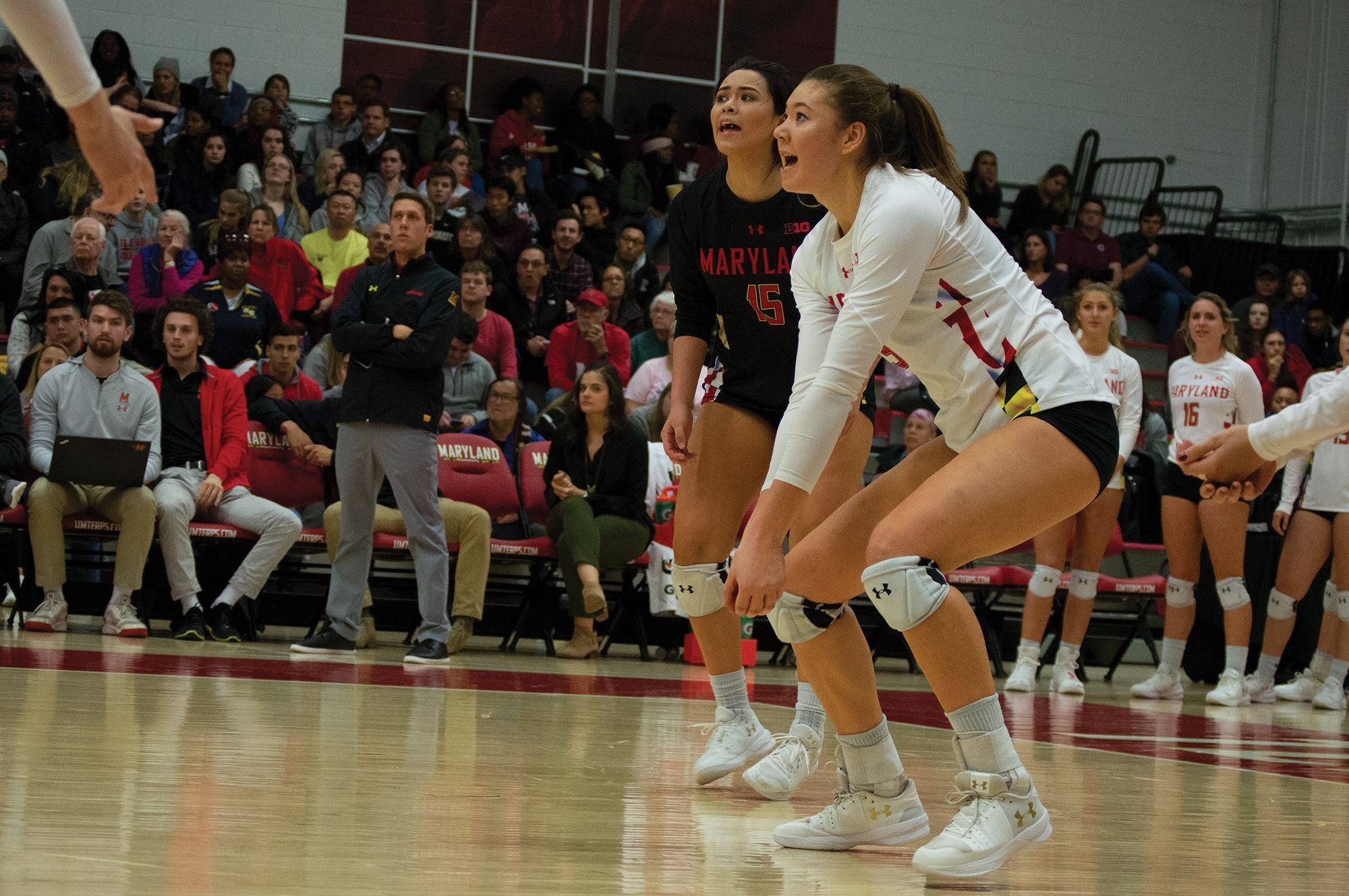 Outside hitter Erika Pritchard prepares to bump the ball as libero Allegra Rivas looks on during Maryland’s 3-1 loss to No. 3 Minnesota at Xfinity Center Pavilion on Nov. 16, 2018. (Joe Ryan/The Diamondback)

After dropping the first set against Kansas State, outside hitter Erika Pritchard polished off a tight second set with her 15th kill of the match, bringing the Maryland volleyball bench to its feet.

That excitement was carried over from the first match of the Terps’ double header, where they trounced Austin Peay in straight sets. So, in the second match of Saturday’s season-opening weekend, Maryland again leaned on Pritchard, who finished with 25 kills in a 3-2 win over the Wildcats.

Saturday’s nightcap was a back-and-forth affair, testing the Terps’ endurance early in the season. But coach Adam Hughes, in his second season at the helm, was pleased with how his team handled two matches against two teams that finished above .500 in 2018.

“I think last year at this time we probably lose that match just because of lack of physical preparation,” Hughes said. “I give a lot of credit to our training staff for keeping everyone fresh out there.”

[Read more: With an experienced core, Maryland volleyball is focused on making the NCAA tournament]

With setter Nicole Alford sidelined with a foot injury, Samantha Snyder and Taylor Smith combined to make up for her absence. Snyder in particular helped orchestrate the offense, doling out 29 assists in the second match against Kansas State.

Snyder, a senior, backed up Alford for most of last season but played a considerable amount of time as a sophomore. And since Alford suffered her injury setback this offseason, she’s been preparing to fill in. Many of Snyder’s assists were set up to preseason All-Big Ten honoree Pritchard, who totaled 37 kills between the two matches.

“Sam’s been great,” Pritchard said. “We had a really good connection out there today.”

Maryland began the fifth set on a 8-0 run against the Wildcats, bouncing back from the 10-point fourth-set loss. Snyder contributed to the hot streak with two service aces, and the Terps eventually edged out the frame, 15-9, to secure the match.

Maryland had struggled to a .125 hitting percentage in the fourth frame, but rebounded with a .273 attacking clip in the final set. The turnaround was all according to plan.

“I told Erika to take a breather at the end of the fourth just to get some fresh legs back out there for the fifth,” Hughes said.

A year ago, the Terps were 0-3 in five-set matches during nonconference play. Battling doubleheader-induced fatigue, Maryland and Pritchard powered through in their first opportunity of 2019.

“I was a little tired in the second match, especially because it was our first day of games,” Pritchard said. “But it ended up being worth it.”

Against Austin Peay in the first match of the day, Pritchard posted a match-high 12 kills while Alford distributed 16 assists. As a team, the Terps committed just 10 errors during the three-set sweep.

In between matches, Hughes squeezed in a film study so his squad would be prepared for Kansas State’s method of operation. The film also exposed a weakness on the Wildcats’ frontline, one that Pritchard took advantage of.

“We were kind of playing a cat-and-mouse game with Erika,” Hughes said. “They had an undersized setter, so we tried to exploit that.”

The Terps also received help from newcomers on Saturday. In her first match with the team, outside hitter Rebekah Rath had five kills, followed up by 10 kills in the second match. Rath was originally a 2020 signee who finished high school early and reclassified to become a member of the 2019 class.

So with two wins under their belt to begin the season, the Terps were pleased with opening-day effort.

“We want to be a consistent team,” Hughes said. “This was a good start for us.”