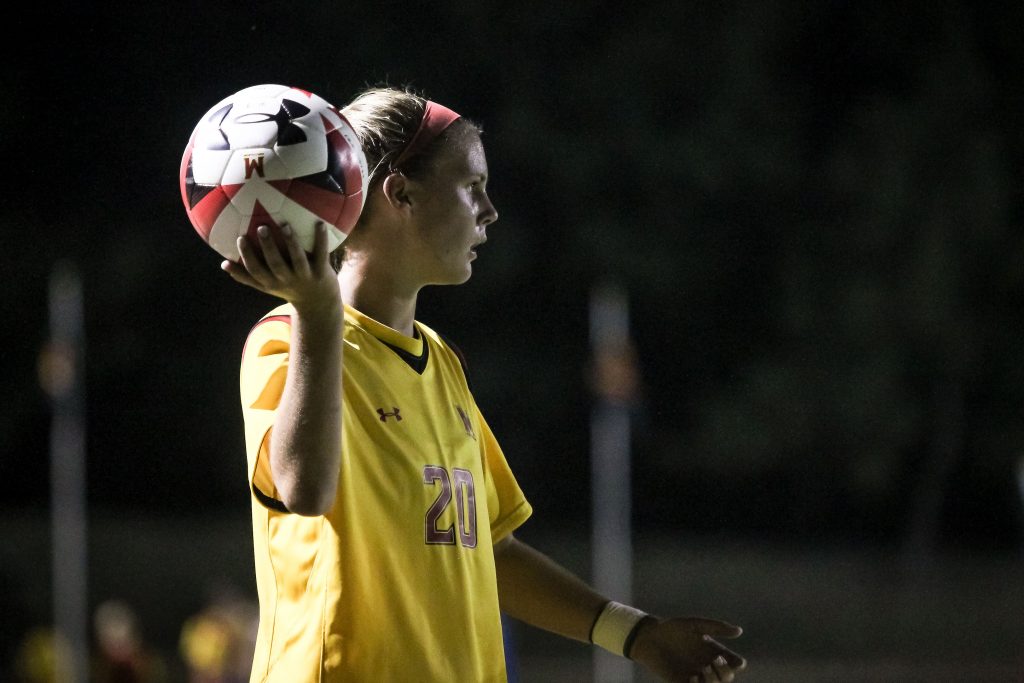 Defender Niven Hegeman prepares to throw the ball in during Maryland’s game against Illinois on Sept. 22, 2016 at Ludwig Field. (Marquise McKine/The Diamondback)

With 15 minutes left in the first half against New Jersey Institute of Technology, Maryland women’s soccer defender Niven Hegeman charged forward to pressure an opponent.

Hegeman didn’t win the ball back for the Terps, though. Her leg twisted, she fell over in pain and had to be helped from the field with tears in her eyes. Hegeman’s season was over almost as soon as it began, with a test confirming a torn ACL.

Losing Hegeman in the 30th minute of its 1-0 double-overtime victory over NJIT was already a big hit to a developing Maryland women’s soccer team. But with the injury sidelining Hegeman, coach Ray Leone has been forced to quickly steer his focus to players still available to take the field at the Bulldog Classic in Georgia this weekend.

“It’s the first game without her, so we’re going to have to figure it out,” Leone said. “And that’s still an ongoing conversation. We feel bad for Niven because she put so much effort into this and had been playing so well.”

[Read more: With many chances, Maryland women’s soccer wants to be more prolific in front of goal]

Hegeman started 15 of the 18 games she appeared in last season, amounting to 1,339 minutes. The Frostburg native had started the first two games of this season, figuring to be a key defender for Leone’s squad once again.

“Sports is unfair,” Leone said. “Thirty minutes into the second game, to have that happen was very disheartening. But there are plenty of players on the team who are ready to take the opportunity and make the most of it.”

Despite the Terps benefitting from a deep roster this year, there is no replacement yet in the starting lineup. Leone said the decision will not be made until after the team arrives in Georgia.

When there, Maryland will look to continue the high-tempo offense it established in its first two wins. And heading into the Terps’ first two road matchups, Leone has been happy with the development of his defense. They held NJIT scoreless, and while Georgia Southern scored in Maryland’s 2-1 win, the Eagles were held to just four shots.

“It’s a good developing partnership between [Malikae Dayes] and [Adalee Broadbent], the two centerbacks,” Leone said. “Alexis [Hogarth] was fantastic in overtime, she really pushed it attacking-wise. Darby [Moore] has been solid the whole way as well.”

Maryland’s defense has allowed only nine shots through its first two games. And Georgia Southern’s only score came off of an inadvertent deflection by the Terps, meaning a Maryland opponent has yet to ripple through the back of the net on of its own efforts.

The back line has been quick to close down opposing attacks this season. But when it faces Auburn and Georgia this weekend, Maryland will be tested by stronger offenses.

“It really takes time,” Leone said. “Four, five, six games to start, saying we’re tight, we know what we’re doing, we know each other, and that’s a really big deal in the back four.”

Leone believes the the strong play and leadership of goalkeeper Erin Seppi has been a major asset for the defense. Seppi had seen minimal game time the past two years, playing a backup role to two-time third team All-Big Ten shot-stopper Rachel Egyed. But now, she is the clear No. 1 between the sticks.

The Terps will take on 2018 NCAA tournament participant Auburn on Friday and Georgia on Sunday. Both will be a test for a team as it recovers from losing Hegeman.

“We chose this tournament for a reason,” Leone said. “It’s extremely high level. I’m really looking forward to seeing how we handle that kind of pressure. Both the teams we are playing are extremely well-coached and obviously are extremely athletic.”