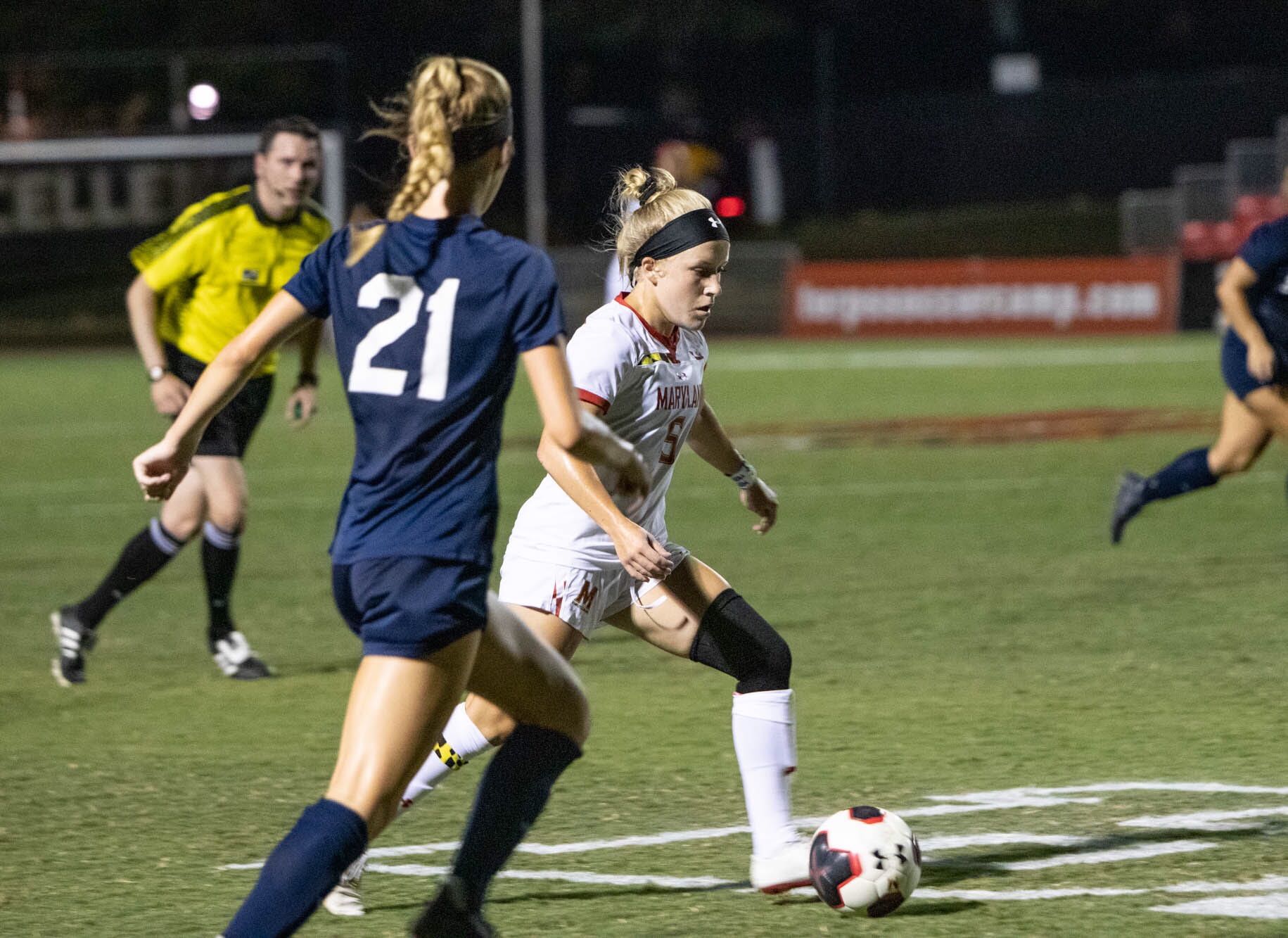 Midfielder Hope Lewandoski takes a touch on the ball in Maryland women's soccer's 2-1 win over Georgia Southern on Aug. 22, 2019. (Richard Moglen / The Diamondback)

By the time midfielder Loren Sefcik drove a hard cross across the goalmouth midway through the second overtime period Sunday, there was no guarantee a Maryland women’s soccer player would be on the end of it.

Throughout the first 10-minute overtime, the Terps had created a plethora of chances against New Jersey Institute of Technology. But the shots missed the mark, finding goalkeeper Molly Saylor or flying wide entirely.

Midfielder Hope Lewandoski, though, streaking through the box, got on the end of Sefcik’s final crossing attempt and sent it past Saylor. Lewandoski flopped to the ground, sat upright and stretched her arms wide as her teammates flooded onto the pitch, her golden goal securing a 1-0 double-overtime victory.

“This is definitely a very hard fought game,” Lewandoski said. “We were working through a lot of problems on the field. I’m just grateful we were able to put it in the back of the net and win this game for our team.”

The Terps (2-0) had dominated much of the possession and chances against the Highlanders. Coach Ray Leone’s squad manufactured a 24-to-5 shot advantage over NJIT (0-1-1), and had six corners to the Highlanders’ two.

Late in the first half, Sefcik found ample space just outside the box. She booted a shot that sailed just over the bar, skimming the netting on the goal. Sefcik’s shot capped off a half full of chances that just missed, keeping the Terps level with NJIT heading into the break.

Maryland opened the game with a similar strategy to its 2-1 victory over Georgia Southern on Thursday, employing aggressive play to find chances early. In the first minute of the game, forward Alyssa Poarch crossed the ball to forward Mikayla Dayes in the box for a shot on goal saved by Saylor.

“We’ve just got to finish it,” Leone said. “And follow up when you get a good hold of a shot.”

It wasn’t until the 21st minute that Poarch found another clear-cut chance. She ran past the NJIT defense and attempted a shot on goal, forcing another save out of the Highlander keeper. Meanwhile, NJIT was held without a shot in the first half.

[Read more: Maryland women’s soccer made progress in 2018 but couldn’t get over the hump]

The Highlanders began to settle into the game, opening the second half registering their first shot from midfielder Jessica Aseng. The Highlanders would follow up with two corners over the next 15 minutes. And while both teams traded chances in the last 30 minutes of regulation, the squads were held scoreless.

Maryland came into the first overtime period with a slew of chances, getting Sefcik in front of goal. She missed a sitter, though, to keep the game scoreless. Not long after, forward Emily McNesby forced a diving save off the Highlander keeper, followed by a powerful shot outside the box from Poarch that the keeper was able to punch away.

“Every single opportunity we are going to get on frame and on net,” Lewandoski said. “We’re going to finish one of them and not waste 10 minutes.”

The Highlanders escaped the onslaught of opportunities from the Terps to bring the game to the second half of overtime. But Sefcik’s cross midway through the final period found Lewandoski, and the junior made no mistake in front of goal.