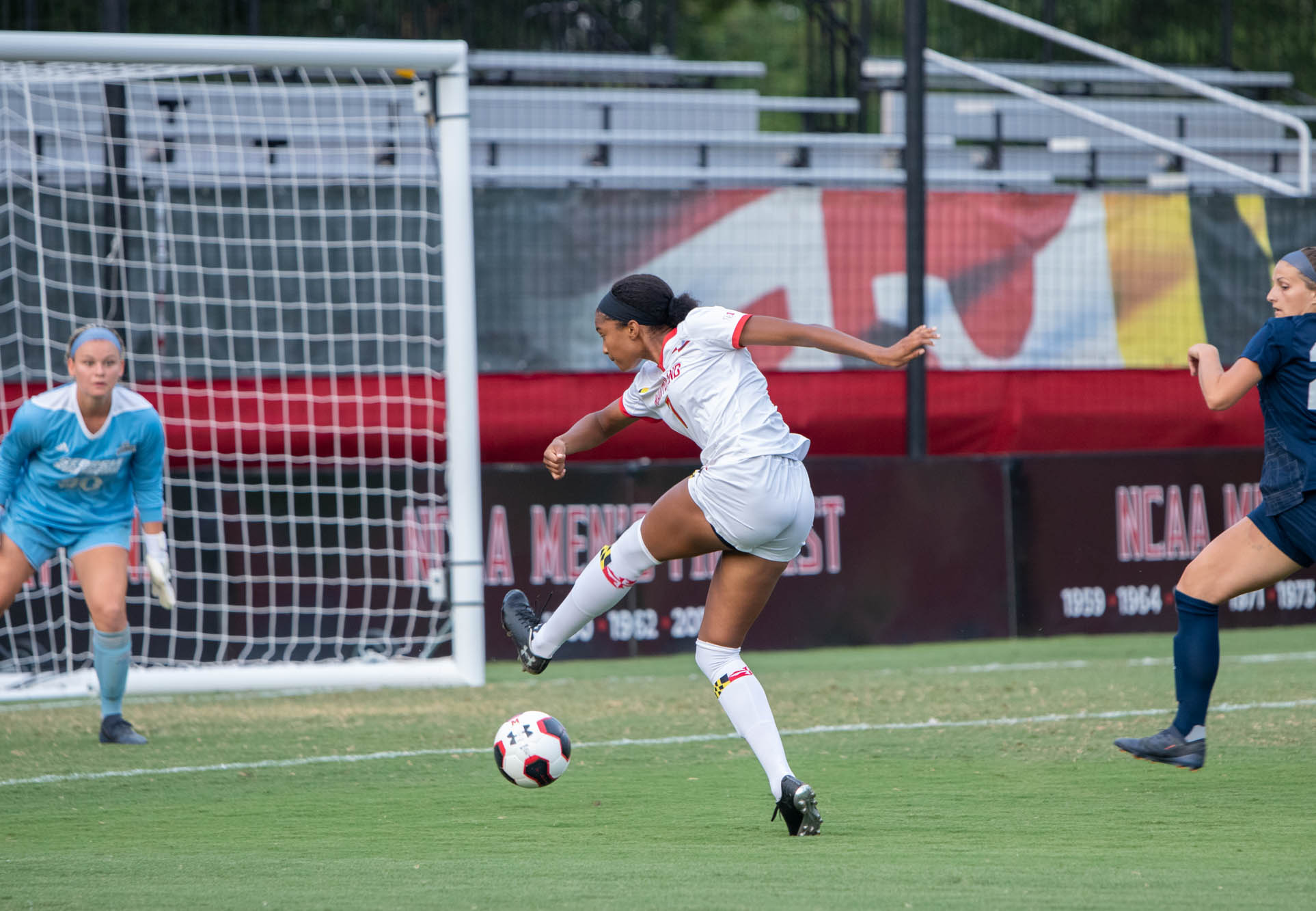 Just over a minute into the Maryland women’s soccer team’s season, a high press forced a miscue and led to an early breakthrough.

Poarch slotted home into the bottom right corner of the goal, turned back around and ran to give her strike partner a hug. Later in the match, it was Dayes’ turn to shrug off a defender and find the back of the net, guiding Maryland to a season-opening 2-1 win over Georgia Southern.

“The first five minutes, we had the adrenaline going,” Poarch said. “We definitely have to set the tone at the beginning, and I think we did that tonight.”

The Terps won their third straight season opener, looking to get off on the right foot after the Big Ten preseason ranking predicted the squad would finish 13th in the conference.

“Last year is last year,” coach Ray Leone said. “Stay in the present. We just have to play together, and we’re a new team.”

[Read more: Maryland women’s soccer made progress in 2018 but couldn’t get over the hump]

Maryland continued its attack with Poarch stealing the ball in the fourth minute, going one-on-one with Karinshak. But that time, her shot went just wide of the post. And while the Eagles attempted to get into the game after their slow start, the Maryland midfield and defense didn’t make it easy on them, closing down most of their attacking opportunities quickly.

In the 14th minute, Dayes almost found a goal of her own off a through ball over the top. Her first attempt was saved by Karinshak, but dropped to Dayes again off the deflection. However, a sliding block from defender Nora Falnes thwarted Dayes’ chance at the goal.

Georgia Southern found a way back into the game, though, in the 39th minute. A cross from Eagles forward Maddie Klintworth forced goalkeeper Erin Seppi off her line to meet the oncoming attack. Junior defender Malikae Dayes’ attempted clearance deflected off another Maryland defender and went into the open net for an own goal, leveling the score entering halftime despite the Terps outshooting the Eagles 14-2 at the break.

“We had a lot of chances tonight,” Leone said. “It wasn’t just two goals. It was a lot of really good chances. We’ll learn from that. We’ll get better at finishing those chances.”

The Eagles found the bulk of the attacking opportunities early in the second half, but the tide turned with a long ball from redshirt senior Darby Moore to Mikayla Dayes, leaving the forward one-one-one with the goalkeeper in the 55th minute. However, an extra touch from Dayes gave the shot-stopper enough time to corral the ball.

Dayes would break the deadlock about 15 minutes later, though, stealing the ball in midfield and bursting past the Georgia Southern defense. Despite a tug on her shot as she geared up for a shot, Dayes found the back of the net, securing the 2-1 lead the Terps would see through a lengthy lightning delay.