With many chances, Maryland women’s soccer wants to be more prolific in front of goal 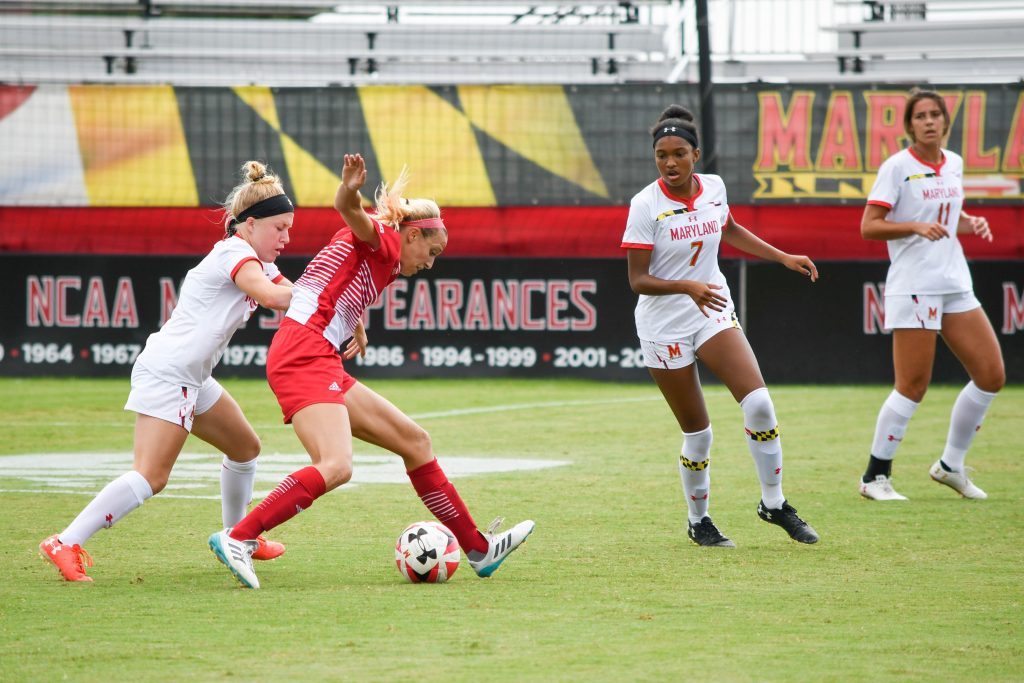 When midfielder Hope Lewandoski slotted home the game winner for Maryland women’s soccer Sunday against the New Jersey Institute of Technology, the Terps attack could breathe a sigh of relief.

Before scoring that goal, Maryland saw 23 shots miss the mark or end up in the arms of goalkeeper Molly Saylor. The 24th did the trick, securing a 1-0 victory and continuing an onslaught of chances through the first two games of the season. The Terps’ 44 shots in two games are over twice as many as they produced from their first matchups in 2018.

The increased attempts at goal is a welcome sign for coach Ray Leone’s squad, leading to two wins. The next step, though, will be converting those chances with more consistency.

“Last year we didn’t have that offensive presence,” Lewandoski said. “Having that this year is definitely a positive thing. Now we just need to focus on actually executing that.”

The Terps also battled missed opportunities in their first game against Georgia Southern. Maryland’s two goals were enough to come away with a season-opening 2-1 victory, but a 10 percent conversion rate leaves something to be desired.

“We need to work on finishing,” midfielder Loren Sefcik said after assisting the game-winning goal Sunday. “Last game, we had 18 or 19 chances and we only scored two. We need to get the opportunities where we need to finish it.”

Sefcik missed three shots of her own in the game, including a powerful strike that went just over the bar and a sitter in front of goal at the beginning of overtime.

Forward Alyssa Poarch, who scored the Terps’ first goal of the season just over a minute into the contest against the Eagles, also struggled to finish in her second game. After a successful summer playing in the Women’s Premier Soccer League — she led the entire league in points (37) and goals (16) — Poarch will look to finish more chances.

“Scoring a lot of goals in the summer definitely helped my confidence,” the redshirt sophomore said. “I just want to carry that through the rest of the season.”

Poarch, along with starting strike partner Mikayla Dayes, have been quick to create opportunities for each other. They’ve both found the back of the net; against Georgia Southern, the pair combined to finish just two of 17 shots.

The defenses Maryland face will likely improve come Big Ten play, meaning the torrent pace of shots will likely decline as the season progresses. But the chances created through two games — despite some issues finishing them off — gives Leone confidence for the weeks and months ahead.

“The shots have been on target,” Leone said. “You’ve got to make the goalkeeper do something. We’ve made both goalkeepers do a lot.”