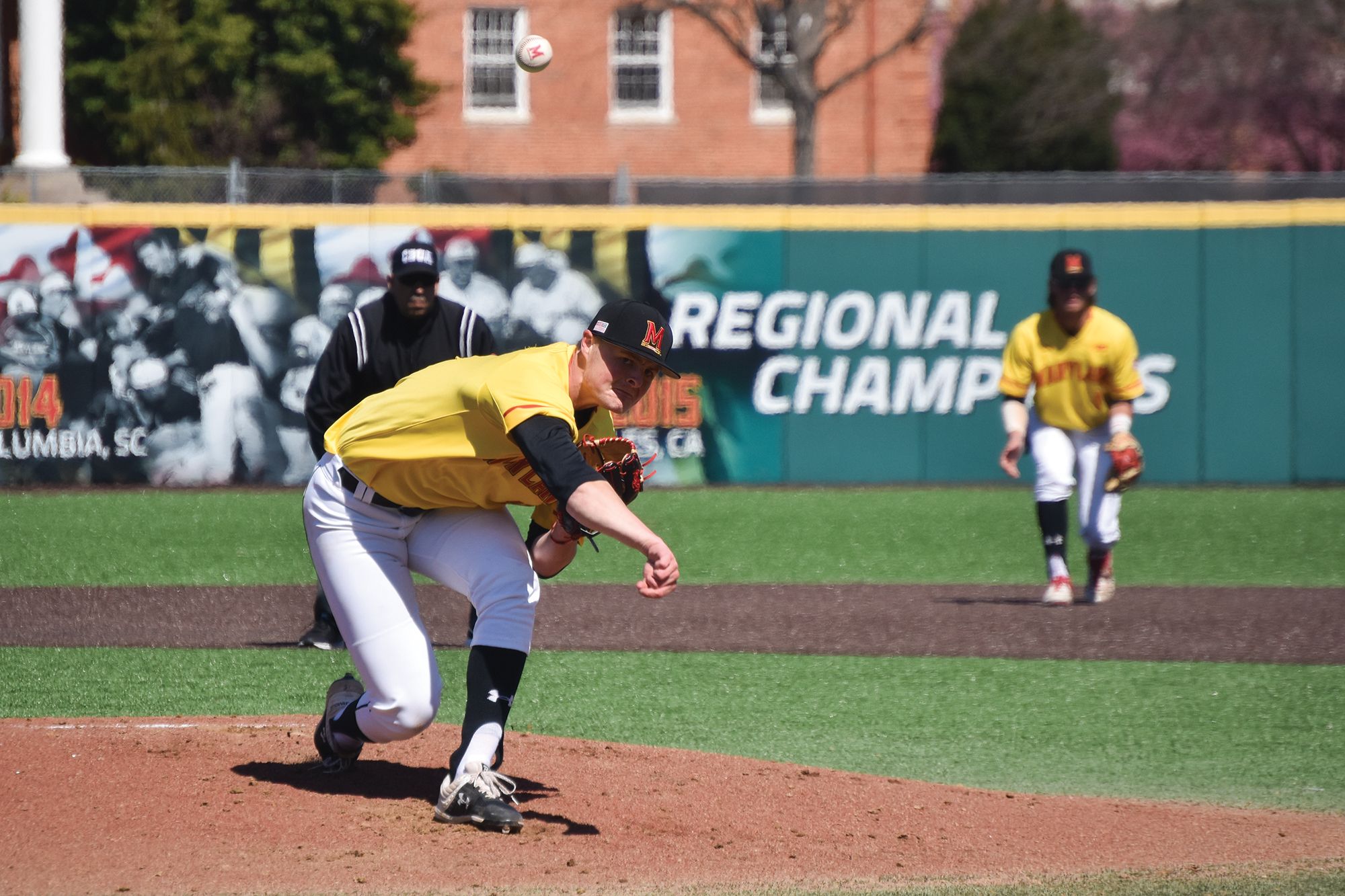 Ohio State closer Andrew Magno had about 13 hours to ponder his approach against Maryland baseball’s Michael Pineiro, a weather delay suspending the game in the eighth inning Thursday night with one out and a runner on second.

When play resumed Friday morning in Omaha, Nebraska, there was Magno on the mound, despite pitching for a third straight day. He tossed nine pitches Thursday night before the rain began to lash down and 25 in two scoreless innings the night before.

Pineiro also had ample time to think of his approach, as did catcher Justin Vought. But the outcome Friday in the eighth likely matched closer to Magno’s ideal scenario rather than the one the Terps envisioned, trailing by one. Magno blew an up-and-in fastball past Pineiro, and then dropped in a curveball that Vought swung through, stranding that all-important run at second.

After rain delayed the start of Thursday’s outing and more fell to postpone it until Friday, Magno worked around another one-out baserunner at second in the ninth, closing the door on Maryland. The Buckeyes topped the Terps, 3-2, with Magno letting out a roar when his 38th and final pitch was nabbed in center field to end the contest.

Ohio State went on to break the tie with a second chance in the eighth, Brady Cherry’s popup into foul territory down the first-base line falling innocently to the grass rather than finding its way into one of the three Maryland gloves descending on the area.

The Buckeyes’ left fielder could breathe a sigh of relief, walk back to the batter’s box and take more hacks. And as second chances so often do, it came back to bite the Terps. Cherry’s next swing found grass in fair territory, setting up the Buckeyes with a one-out opportunity in the eighth inning Thursday.

Then, Connor Pohl’s sharp grounder tipped off the edge of Taylor Wright’s glove on a dive at third, skipping into left field and sending Cherry to third. Right-hander Mark DiLuia, working to preserve a game locked at two since the third inning, allowed a walk and then a lazy fly ball into center.

But it was deep enough to score Cherry from third and hand Ohio State an advantage once more, one it held onto this time to drop the Terps into the consolation bracket and put them in an elimination game Friday afternoon against No. 2-seed Michigan.

With his solid 6 ⅔ innings in Friday’s win over Iowa, which helped Maryland control its own destiny for the Big Ten tournament heading into the series finale, right-hander Zach Thompson continued a strong end to his first year pitching for the Terps. The redshirt sophomore lasted at least six innings in six of his last seven starts.

But he missed out Thursday in the Terps’ second game of the conference tournament with soreness, described as day-to-day by a team spokesperson. That propelled right-hander Trevor LaBonte onto the mound as a starter for the first time since May 5, when the freshman hurler managed two innings while allowing four runs and four walks in a loss to Michigan.

Against Ohio State — the owners of the Big Ten’s third-best team batting average — LaBonte got two strikes past Dominic Canzone to lead off his outing. His third pitch plunked the right fielder, though, a first team All-Big Ten selection who needs no help getting on base. The misfire extended Canzone’s 53-game on-base streak, setting the Buckeyes up with an early chance.

They cashed in, too, bunting Canzone to second and moving him to third with a groundout. Cherry drove him in with a two-out grounder through the left side, giving left-hander Griffan Smith a 1-0 lead to work with before he even took the mound. He’d receive a two-run cushion in the third, with Canzone scoring on a throwing error from Wright.

In his last matchup against the Terps, the southpaw mowed them down. He scattered four hits and 10 strikeouts across nine innings of one-run baseball. Smith ran into trouble in the second inning Thursday, though, walking Vought on four pitches and giving up a double to designated hitter Josh Maguire in the next at-bat.

While Smith avoided damage, forcing two flyouts to end the inning, he faltered in the third. With Wright at first with two outs, Smith delivered an up-and-in fastball to first baseman Maxwell Costes, who got on top of it and throttled a two-run home run for the second straight game, tying the contest at two.

And LaBonte backed up the Costes homer with a nine-pitch fourth frame. Besides two free passes to Canzone to lead off the first and third innings — one walk and one hit by pitch — LaBonte was solid through four, allowing one hit while Canzone scored twice.

With center fielder Chris Alleyne on second with one out and Smith’s pitch count nearing triple digits, coach Greg Beals made the trip to the mound in the seventh.

But Smith remained in the contest to face shortstop AJ Lee, who battled him for nine pitches but eventually went down when Smith hurled a fastball past him. Then Smith stranded Alleyne on second with his 10th strikeout — catching the outside corner to send right fielder Randy Bednar back to the dugout, a 2-2 game maintained.

The Buckeyes broke through in the eighth, though, plating one run. DiLuia stranded the bases loaded, but the damage was done. Ohio State took a 3-2 edge, the Terps got a runner on second and the rain began falling once more, suspending action until Friday morning.

Magno then re-entered, striking out two to strand a runner on second in the eighth and working around a leadoff walk in the ninth, sealing Ohio State’s narrow win.