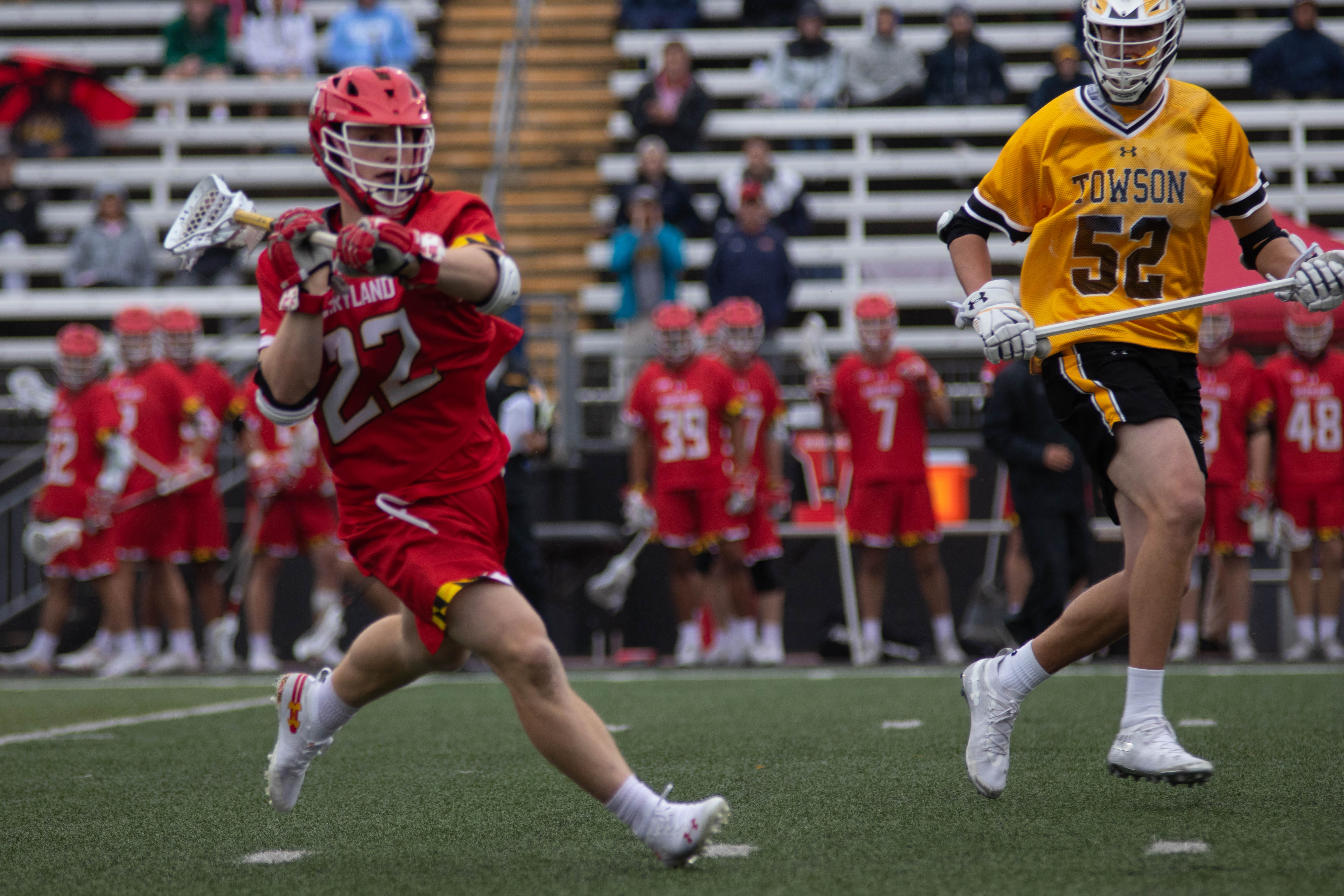 Midfielder Wesley Janeck prepares to pass during Maryland men's lacrosse's 14-13 overtime win over Towson in the first round of the NCAA tournament May 12. (Julia Nikhinson/The Diamondback)

Before the season began, Maryland men’s lacrosse coaches were searching for a third option to take faceoffs in emergency situations — whether it be injury or to offer a different look to opposing specialists.

The coaches landed on senior midfielder Wesley Janeck, a high-energy player who excelled in ground ball situations during his first three seasons but had not taken a game faceoff in his college career to that point.

To start the fourth quarter of the Terps’ eventual 14-13 comeback win over Towson, the coaches summoned Janeck to counter Tigers’ faceoff specialist Alex Woodall, who had won 15-of-21 draws to that point — many of which came easily.

Maryland faceoff coach Tyler Barbarich’s instructions for Janeck were clear: muck up the faceoffs. Janeck did just that, forcing Woodall to battle in an area that he had comfortably controlled otherwise. In the end, Janeck finished just 3-for-11 on faceoffs, but his tenacity from the X did not go unnoticed by his team.

“We jokingly said in the film room it was the greatest 3-for-11 faceoff performance ever in the history of the sport,” coach John Tillman said. “It’s not just stats. … What Wes brought to the table is energy, his toughness, right? Just all of that, like, we all fed off that.”

[Read more: With its season on the line, Maryland men’s lacrosse came up clutch to force OT vs. Towson]

In his first three seasons under Tillman, Janeck was a defensive midfielder who had a knack for recovering ground balls.

That role continued this season, as Janeck made contributions scooping up tough ground balls off the wings on faceoffs. Despite not appearing in two games, he ranks third on the team in ground balls with 43.

“He’s like one of those golden retrievers, where you throw the tennis ball out [and] he just chases it,” said attackman Louis Dubick, Janeck’s roommate and good friend on the team.

While Janeck’s faceoff experience is limited, he has been called upon sparingly this season to change up the pace from the X. Before appearing in relief against Towson, the senior had taken just 18 faceoffs with Maryland, all of which came this season.

Until his first draw this year, which came against Villanova on March 16, facing off was an occasional occurrence in practice and something he hadn’t done in a game since high school.

So at the end of the first quarter Sunday, when Janeck was inserted to take a faceoff against Woodall — who ranks second in the nation for faceoff winning percentage at 74 percent — the emotions were mixed.

“It was a little unexpected coming off the bench as the third-string guy,” Janeck said. “But it was pretty exciting. Definitely a little intimidated; we watched film on him, he’s a really good player. So just kind of stepping in, trying to do anything I could do to scrap it up was my mindset.”

Janeck lost that initial faceoff against Woodall, and the coaches reverted to the top-two options at the dot in Austin Henningsen and Justin Shockey for the second and third quarters.

But neither player found consistent success against Woodall, finishing a combined 6-for-20 on the day. And with Woodall winning cleanly on many of those attempts, the Terps’ coaching staff turned to Janeck for the fourth quarter as the team trailed 10-8, needing a slew of possessions to mount a comeback.

“It just threw a little bit of a different wrinkle at [Woodall], and that’s about the best we could do because he was just controlling the X,” Tillman said. “And we needed to get every little possession that we could get.”

During the fourth quarter, Janeck secured three possessions from the draw for Maryland’s attack. Even when he couldn’t win the draw, Janeck thwarted Towson’s plans to initiate quick offense off the faceoff as Woodall no longer won without a fight.

When the Terps won the game in overtime, finishing off the late comeback, Janeck emerged as one of the unsung heroes that oftentimes prove vital to a team’s chances at advancing in the NCAA tournament.

“We never knew if he’d have a huge impact [on faceoffs], but we needed a different option in case things didn’t go well,” Tillman said. “As it happened, in one of the biggest moments, he really helped us out.”