As seniors, Danny Dolan and Louis Dubick have larger roles for Maryland lacrosse 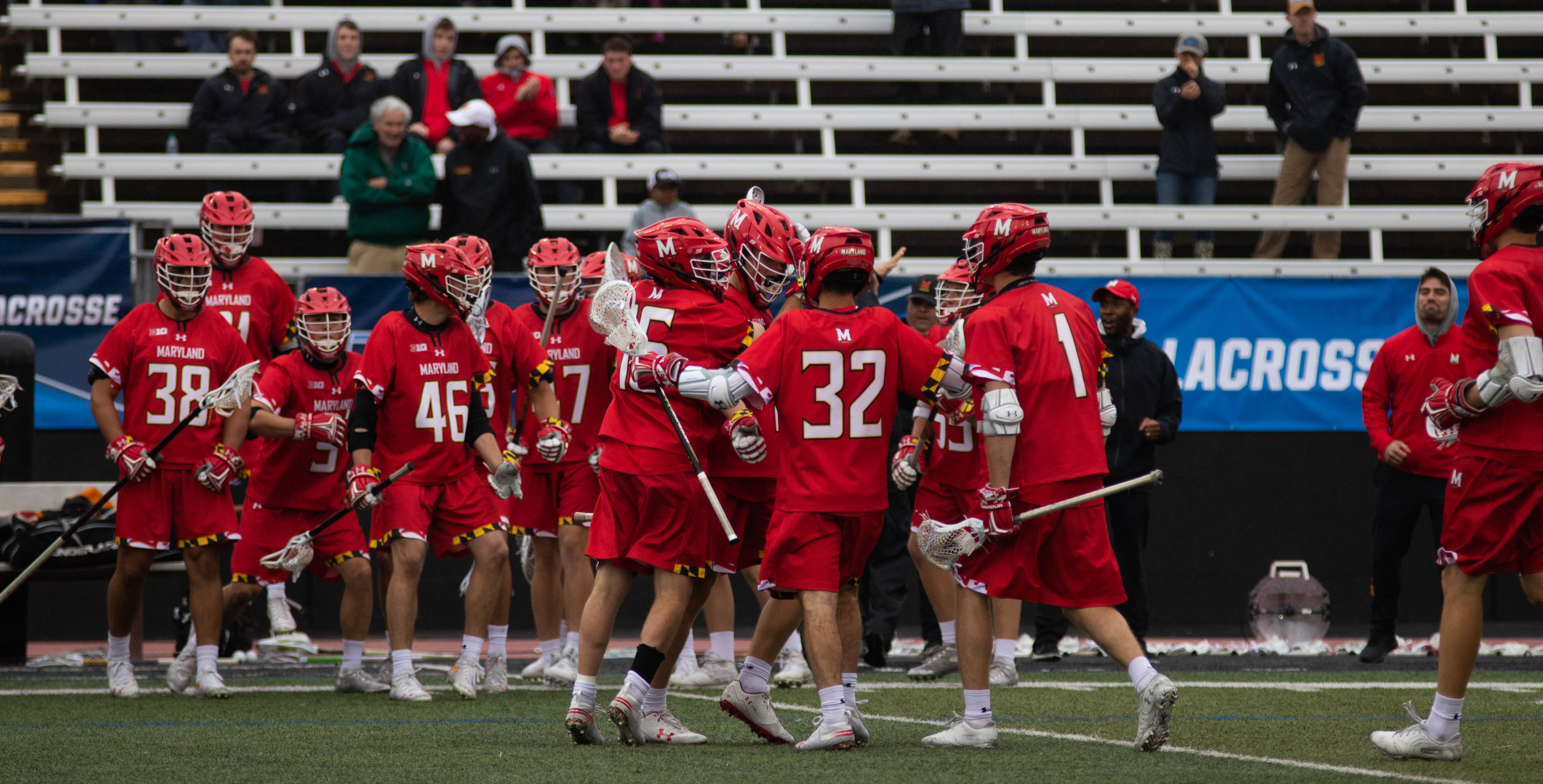 Maryland men's lacrosse beat Towson, 14-13, in overtime May 12, 2019, in the first round of the NCAA tournament. (Julia Nikhinson/The Diamondback)

After scoring the game-winning goal in a 14-13 overtime win against Towson, Maryland men’s lacrosse attackman Louis Dubick turned and ran toward the opposite goal with his arms outstretched.

Dubick bypassed his teammates, who had stormed the field, making a beeline to goalkeeper Danny Dolan and leaping into the air in celebration. The convergence was fitting, featuring the goalie who kept the Terps alive and the attackman who finished the comeback win.

At the start of the season, with a slew of playmakers returning to the lineup, it may have been difficult to picture Dubick — who totaled just five points in 2018 — and Dolan — who played just two games in his first two seasons behind Dan Morris — at the forefront of the victory that kept Maryland’s season alive. But there they were, the center of a mosh pit celebrating a first-round triumph.

“It says a lot about those guys willing to just commit to the team and not focus on their playing time,” coach John Tillman said. “There’s always going to be opportunities. You don’t know when it’s going to come, but if you make the most of your opportunity, you can make an impact here and have some memories that you’ll have for the rest of your life.”

Maryland’s top returning players made their presence felt, especially in the second half. Midfielder Bubba Fairman and attackmen Jared Bernhardt and Logan Wisnauskas combined to score six of the nine goals after halftime.

But it was Dolan and Dubick, two seniors accepting new roles in the starting lineup to begin the season, who played leading parts in extending Maryland’s season — and their college careers — into at least the quarterfinal round of the NCAA tournament.

Dolan was virtually unknown for the Terps, playing just over four minutes in his first two seasons in College Park after transferring from UMass. As a backup goalie, Dolan had made two relief appearances — both in blowout wins.

Over the course of the year, the Garden City, New York, native developed into a stalwart between the sticks, stopping 52 percent of the shots he’s faced.

“It seems like [Dolan] keeps us in every game,” Dubick said. “He’s meant to much to this team.”

[Read more: With its season on the line, Maryland men’s lacrosse came up clutch to force OT vs. Towson]

And in his first career NCAA tournament game, Dolan stymied the Towson attack 15 times. Multiple saves came from close-in, pulling off stops when it appeared the Tigers would find the back of the net without a doubt.

“You look at the stats, 15 saves. Like, that’s just insane,” defender Curtis Corley said. “At times, he bailed us out — on the doorstep, especially.”

Meanwhile, Dubick was an attackman who arrived in College Park as a third-generation Maryland lacrosse player coming off an illustrious high school career. But in his first three seasons, Dubick appeared primarily on the team’s extra-man unit and had made only one start in his career.

From this season’s outset, Dubick flourished as the third piece of Maryland’s attack alongside Bernhardt and Wisnauskas. The Potomac native scored 26 goals this regular season, doubling his total of 13 goals over his first three years.

“It just has to do with patience,” Dubick said. “Just trying to do all the little things right and hopefully you get an opportunity, which I’ve been lucky enough to have this year.”

Many of those goals came in similar fashion to the overtime winner Dubick scored — finding a hole in the middle of the defense and scoring on a quick finish after receiving a pass.

Before the game, long before the afternoon culminated in the midfield embrace between the two seniors, Dolan sent Dubick a text. He told his fellow senior to “have fun” with the team’s impending experience.

Despite a few missed opportunities in front of the cage during the game that haunted him to a degree, Dubick persisted. When he finished the game-winning goal, Dubick took Dolan’s advice to heart, sprinting half the field to celebrate with his goalie.

“I know how much this means to him,” Dubick said. “To be able to win that game for him and to just know how big he has been for us all year is special.”