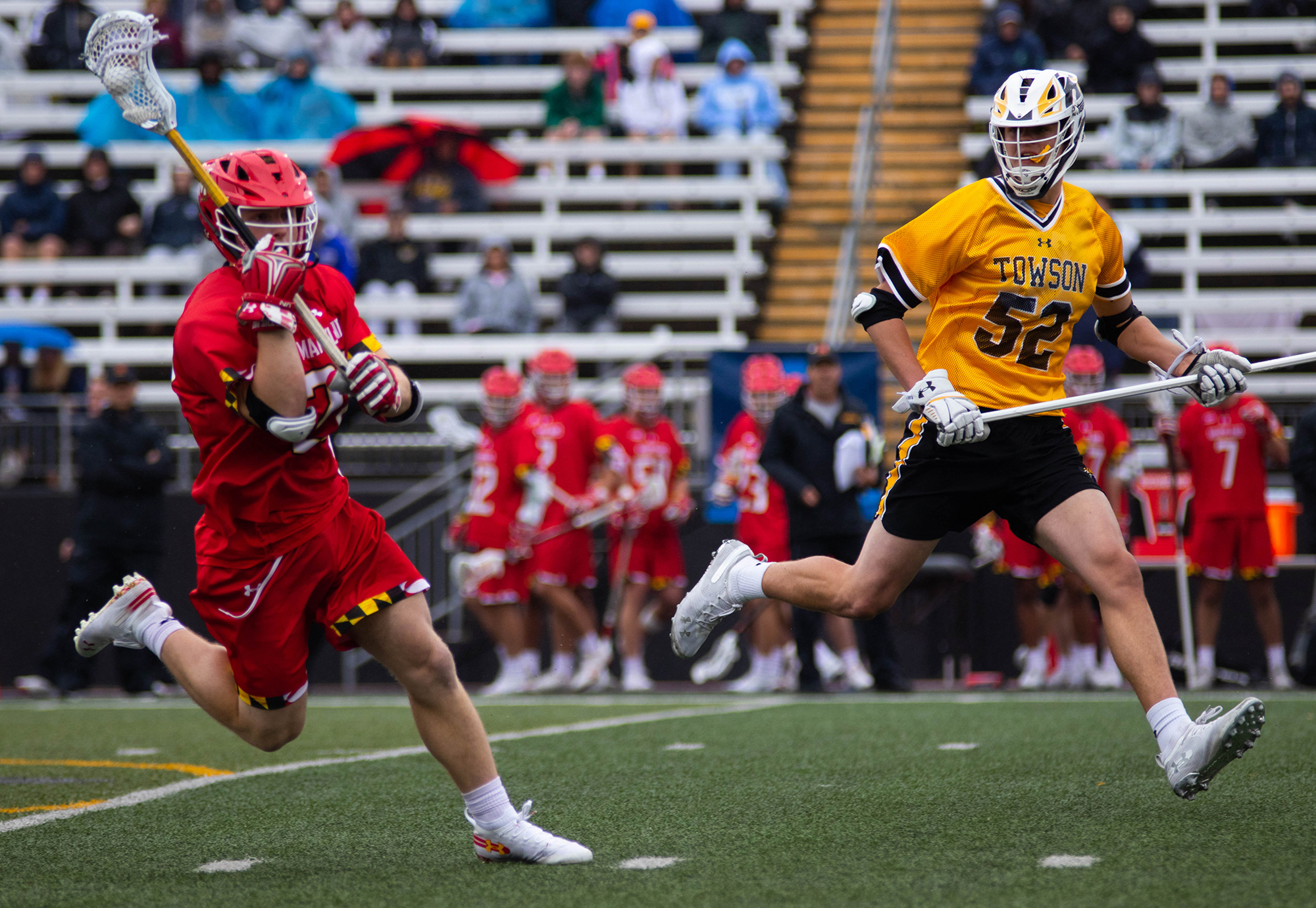 Maryland men's lacrosse beat Towson in overtime, 14-13, in the first round of the NCAA tournament May 12, 2019. (Julia Nikhinson/The Diamondback)

Minutes later, when it was Towson’s time to meet with the media, senior attackman Brendan Sunday fought back tears as he reflected on his college career.

The juxtaposition captured the reality of an NCAA tournament game, especially an overtime contest with an abrupt ending that followed a winding battle of back-and-forth scoring runs.

Seated to Corley’s left was the overtime hero for the Terps, attackman Louis Dubick. Over halfway through the extra session, Dubick freed himself in the middle with an off-ball cut, reeled in a pass and finished the game-winning goal to extend Maryland’s season with a 14-13 win over Towson at Johnny Unitas Stadium on Sunday.

“These are the games, especially at the end of the year, it’s hard to see either team lose,” Maryland coach John Tillman said. “That was a huge difference for us. … The ability to kind of hang in there and fight and get the next play.”

The Terps’ resiliency was a welcome sight for Tillman after two straight losses to Johns Hopkins ended the regular season and bumped them from the Big Ten tournament. In those defeats, which left Maryland unseeded in the NCAA tournament for the first time since 2012, early leads turned into blowout losses.

On Sunday in the first round, though, Tillman’s team needed to lean on a mental toughness that didn’t appear in its last two losses. The Terps fell behind 1-0, faced a trying second quarter and needed an unlikely sequence to even force overtime.

In the improbable ending to regulation that preceded Dubick’s game-winning goal, Towson ran the shot clock all the way down before attempting a shot that would have all but sealed its spot in the quarterfinal round. After that try sailed wide, the Tigers surrendered possession on a shot clock violation, giving the Terps one last chance with 28 seconds remaining.

“I felt very confident,” Towson coach Shawn Nadelen said. “I had all the confidence that the guys were gonna buckle down and be strong on-ball, be disciplined off-ball and cover up what we needed to.”

Needing to go the full length of the field to find the tying score, Maryland overcame an aggressive Towson ride and cleared the ball. Upon clearing, the ball ended up in freshman midfielder Kyle Long’s stick.

Despite the single-digit numbers on the clock, the freshman calmly waited out a pass until attackman Jared Bernhardt opened himself up. Upon catching Long’s feed, Bernhardt quickly squared himself for a shot and delivered past goalkeeper Tyler Canto.

“I just thought the offense, when they got the ball, they knew exactly what they were doing,” Corley said. “Our offense just really canned the looks that they had to can today.”

Capitalizing on offensive opportunities was imperative for Tillman’s squad given the disparity it faced at the faceoff X, where Towson won 21-of-30 draws.

Senior faceoff specialist Alex Woodall, who entered the game second in the country with a 74.5 faceoff win percentage, returned from injury for Towson and showed no ill effects.

The possession advantage continued in the second half for the home team, but Maryland goalkeeper Danny Dolan helped his team stay close — as he did all day with 15 saves — with five third-quarter stops. During that third quarter, the Terps tied the game at 8-8 with an extra-man goal from Dubick.

But Towson answered with goals from attackman Brody McLean — off a feed from midfielder Timmy Monahan, who transferred to Towson from Maryland — and Sunday to reclaim the lead at 10-8 and set the stage for the final 15 minutes.

In the fourth quarter, the teams exchanged scores, with a total of eight goals, three ties and two lead changes.

“It was a little bit of a boxing match,” Nadelen said. “Exchanging blows. We had some lulls in our play, both offensively and defensively, and they capitalized. We created opportunities and we capitalized.”

Sunday gave Towson what would be its final lead of the game at 13-12 with 1:50 remaining, and set up a crucial draw for possession.

Midfielder Wesley Janeck was inserted as a change-of-pace faceoff specialist for Maryland and found the most success in terms of percentage against Woodall, going 3-for-11. But even though Janeck didn’t allow the star specialist to win the draw cleanly, Towson still collected possession.

Towson, however, could not finish off its chance to end the Terps’ season off of that draw. And it failed to do so once again on the opening faceoff win in overtime.

During the overtime’s first possession, Maryland long-stick midfielder Matt Rahill forced a turnover with a tipped pass. Less than a minute later, Dubick’s goal incited a jubilant celebration as players spilled onto the field from the Maryland sideline.

“It’s special. A moment I’ll never forget,” said Dubick, a third-generation Maryland lacrosse player. “This week, we kinda felt it — like we had something special going.”

The journey for this Maryland team will continue on Saturday against third-seeded Virginia in the quarterfinals in Hempstead, New York.

“I’m just smiling,” Corley said. “Having another week with these guys is just amazing. [We’re] just embracing the moments that we have together.”