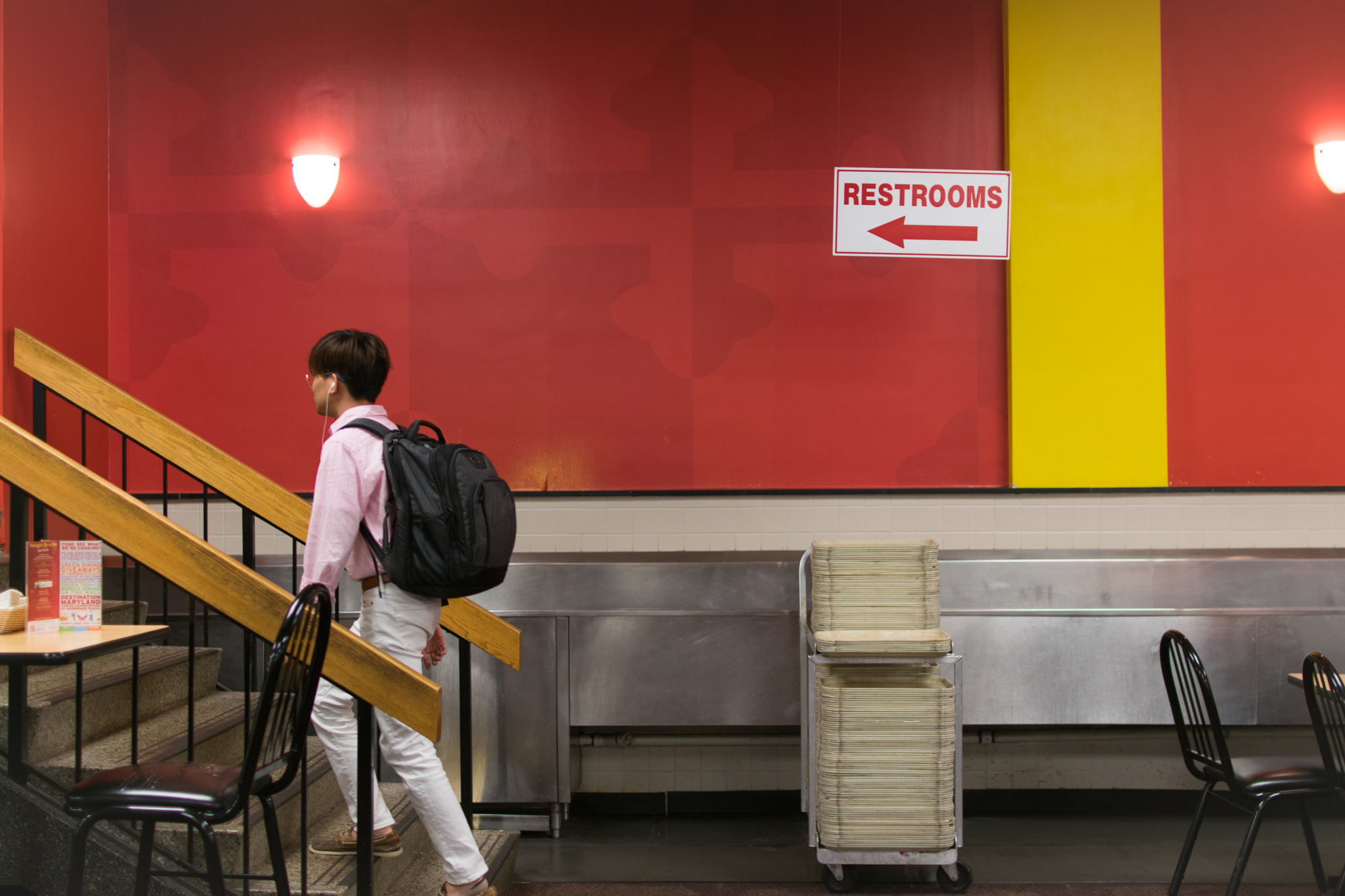 The South Campus Dining Hall bathrooms are one of many places on campus that are not wheelchair accessible. (Gabby Baniqued/The Diamondback)

Bathrooms in the University of Maryland’s South Campus Dining Hall are set to become wheelchair accessible, and gender-inclusive, this summer.

The project will include installing a wheelchair lift and remodeling the dining hall’s bathrooms to meet the Americans with Disabilities Act and campus accessibility standards, Dining Services spokesperson Bart Hipple said.

“We feel that the [dining halls] are a very important connection from student to student and student to faculty and staff,” Hipple said. “Anything that we can do to reduce people being marginalized while within our facilities, we’re happy to do that.”

The wheelchair lift, which will be constructed in the main dining room where stairs had once been, is set to for installation sometime this summer. The renovations to make bathrooms accessible is expected to be completed in before the fall semester, university spokesperson Leon Tune said.

The planned renovations will also make the bathrooms gender-inclusive, though Dining Services is still waiting on Facilities Management to draw up plans for designing the remodeled restrooms. Hipple said that Dining Services requested the designs be completed by June, and expects to finish the renovations by the end of the summer.

The full construction schedule and project details will be determined upon receiving the final design, Tune said. The exact schedule will depend on several factors, including material, lead times and other logistical issues.

Currently, the university has an ADA Transition Plan outlining what renovations it wants for the inaccessible bathrooms around campus — listing wider doorways, automatic door buttons and stalls large enough to fit a wheelchair.

Last month, Adith Thummalapalli, who uses a mobility device, compiled a 43-page report with a few other students, calling administrators to action on different inaccessible areas of campus — including the South Campus Dining Hall.

The Student Government Association endorsed the report at its meeting on April 3.

Thummalapalli said part of the issue in getting funding is many donors are not informed enough about accessibility issues on this campus.

“If some of our big donors knew about some of these little issues that were not getting funded, I’m sure they would be totally fine with some of their donations going towards making sure everyone can access a bathroom,” the junior mechanical engineering major said.

In his report, Thummalapalli said on top of being unable to access the bathrooms inside the dining hall, the third-floor bathrooms — accessible through another entrance — are not large enough to accomodate someone who uses a mobility device.

“Because of this, I often use the bathroom in LeFrak Hall right across from the dining hall, when I need to use the bathroom,” he wrote in the report. “Those with disabilities should not be forced to leave a building to use a bathroom.”

Hipple said he expects construction to begin shortly after graduation this May, but anticipates they will have to work around orientation groups or others who use the facility during the summer.

The Advisory Student Facilities subcommittee, which endorsed and partially funded the project, will be contributing $177,500 toward the project’s estimated cost of $500,000, Hipple said.

The remaining amount will come out of facilities funds set aside for upgrades, he said.

“South Campus Dining Hall is one of the many places on campus that are not appropriately accessible,” Hipple said. “We are really pleased to be able to correct that.”

This is not the first time Dining Services has brought attention to this project. In April 2018, the department requested $235,000 for this initiative in a proposal to the Student Facilities Fund.

If approved, the project could have been completed by fall 2018 — but it was denied due to inadequate funding for that summer.

“It’s a very expensive project — we’ve put this in action as quickly as we could,” he said. “There’s a lot of updating and a lot of upgrading all over campus that needs to happen.” Hipple said.

Other students also welcomed the changes. Stuti Ganatra said these renovations will ensure students in all groups are taken care of.

“For people who have disabilities or are trans, little things like that might get in the way of feeding themselves properly,” the sophomore biology and public health science major said.

Brian Escobar, a freshman individual studies major, echoed Ganatra and applauded the school for its actions, specifically with the proposed gender-inclusive changes.

Despite the long wait, Thummalapalli said he is excited to be able to enjoy these renovations when he returns for his senior year in the fall.

“I’m super glad that they’re actually going to do something about it,” he said. “That’s what I hoped would happen –– I would be bring up the issues and then that might help something eventually get done about it.”