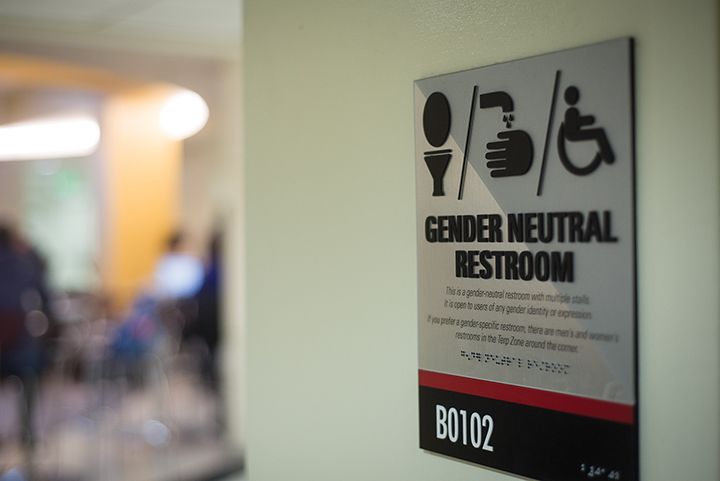 When a University of Maryland Senate bill calling for an increase in gender-inclusive facilities was approved in September, some transgender students like Ellie Litwack considered it a promising sign.

“It was an important way to show support for trans folks, but it doesn’t change a lot practically,” the sophomore mechanical engineering major said.

The bill affirmed that all people have the right to use the restroom of their choice. It required all single-user gender-specific bathrooms be converted to gender-neutral ones, but also recommended that more multi-user gender-inclusive facilities be added across campus.

Meanwhile, some trans students are still forced to plan their days around finding a restroom or locker room they feel comfortable using.

This concern is especially salient for trans students in residence halls. Litwack said she knows some students who shower at Eppley Recreation Center daily because there aren’t gender-inclusive facilities in their living spaces.

“At the end of the day, no one should have to leave the building or wait an excessive amount of time to use a restroom they feel comfortable in, or at least reasonably comfortable in,” said Luke Jensen, director of the LGBT Equity Center.

While action is being taken to address the required aspects of the bill, Litwack said the recommended, non-mandatory measures would make the largest difference for trans individuals.

“Multi-user restrooms are more important [than single-user restrooms] to respect trans people’s right to use the bathroom with the same convenience cis people have,” said Litwack, adding that many trans students she’d spoken to were already using the single-user bathrooms of their choice.

The renovations to convert all single-user restrooms — about 250 — to gender-neutral will be completed this semester, according to an email from Facilities Management. This includes updating each facility with gender-inclusive bathroom signage and installing new door hardware.

The office was unable to provide an estimate of the project’s cost.

Aaron Tobiason, the former University Senate coordinator for the Equity, Diversity, and Inclusion Committee, said some members expressed the importance of implementing multi-user facilities, while others voiced worries about the financial implications of doing so.

The senate does not typically consider specific financial details in great depth when reviewing bills, especially as most legislation is limited to changing policy, Tobiason said. Although ex officio members advise committees on the monetary aspects of a bill when appropriate, he said it’s rare for members to be presented with project costs.

Cost concerns typically come into play more when university President Wallace Loh — and those he designates — carry out the bill’s requirements, Tobiason said.

Now, as the administration is focusing on updating single-user restrooms, there are unclear plans about when students can expect to have more inclusive multi-user facilities on campus.

Jensen said he’s optimistic about the administration’s efforts to move forward on the required and recommended provisions in the bill. He hopes the need for multi-user inclusive facilities is addressed in the next three to five years, but added, “I don’t know if we’ll make that.”

Litwack said the Rainbow Terps Task Force has tentative plans to approach Facilities Management to express their need for these multi-user facilities this coming semester.