Maryland women’s lacrosse knows the postseason will test its mettle 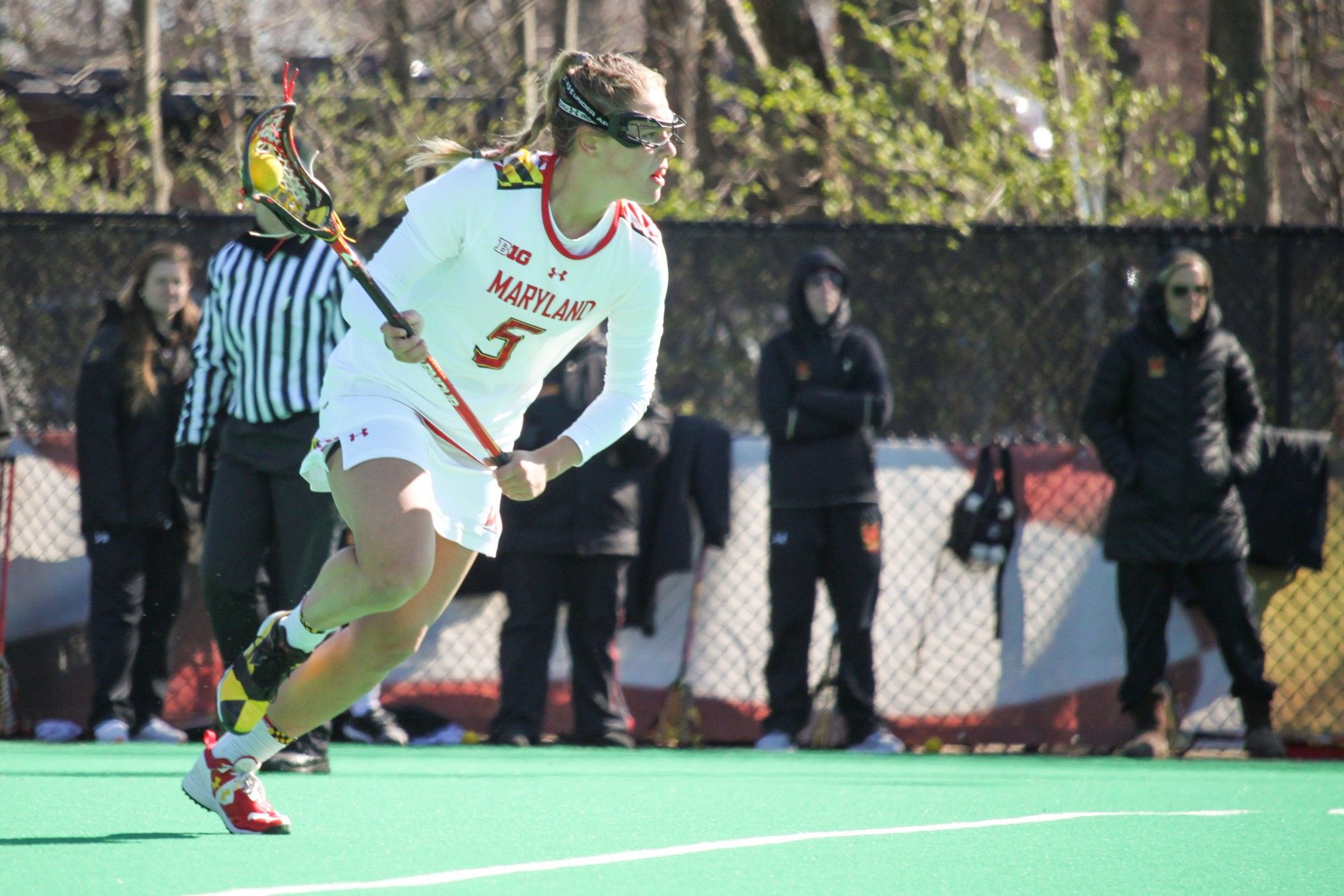 Midfielder Jen Giles looks downfield for a pass in Maryland’s 17-7 win over Syracuseat at the Field Hockey & Lacrosse Complex on March 11, 2017. (Reid Poluhovich/ The Diamondback)

For the Maryland women’s lacrosse team, racing out to early leads has become the norm. A 5-0 burst to begin its game against then-No. 4 Florida in February powered the squad to its first ranked win of the season. Against then-No. 8 Virginia on the road, a 6-0 run to open the game ultimately blossomed into a 16-6 victory.

But when the Terps traveled to Happy Valley to take on Penn State in March, their quick-start identity vanished.

In the pouring rain, the team found itself locked at four with the Nittany Lions late in the first half. But attacker Kali Hartshorn provided a moment of magic to get Maryland back into a rhythm, catching a pass from midfielder Grace Griffin in stride before deftly flicking the ball into the cage behind her back. Her goal ignited the offense, and the Terps rolled to a 17-6 win.

While the end result was all too familiar — a dominant display of Maryland’s seemingly endless talent — the rocky opening was a warning of potential postseason challenges. And when the Terps face Penn State again Friday to open the Big Ten tournament, they’ll be focused on eliminating the complacency that may accompany an undefeated regular season.

“We gotta go through one [game] to get to two,” coach Cathy Reese said. “So we’ve got to take it one step at a time.”

Maryland dispatched conference foes Penn State, Michigan and Northwestern — their three fellow tournament competitors — by a combined 26 points this season. But the Terps know the postseason is a breeding ground for upsets.

When the Terps faced the Nittany Lions away on March 21, the home squad had already played three games without their go-to scorer, attacker Madison Carter, due to a season-ending injury but were still reeling from her absence.

“When we played Penn State, it was one of the earlier Big Ten games,” Reese said. “They were still trying to … establish their identity after losing Carter.”

Since the March loss, Penn State has rediscovered its offensive firepower, averaging over 15 goals per game and coming into the Big Ten tournament on a hot streak. A 18-7 win against Rutgers coupled with a hard-fought 16-15 win at Johns Hopkins booked their ticket to the top four in style.

The Terps emphatically defeated Johns Hopkins on the final day of the regular season to clinch a fifth consecutive Big Ten regular season championship. After such a strong season, complacency is bound to creep in. But the Terps are still focused on themselves.

[Read more: Maryland women’s lacrosse moves to No. 1 in Inside Lacrosse poll for first time this year]

The Terps are not out of the woods if they dispatch Penn State. Maryland overcame an early 3-0 deficit to defeat Northwestern on April 11, but conceded a season-high 13 goals in the process. The Wildcats will take on Michigan in the other semifinal.

Although Maryland rallied and won by four, Northwestern possesses one of the few offenses in the country that can match the Terps. And they’ve shown such an ability in big games, putting 15 past then-No. 4 Notre Dame in South Bend on April 20.

They’ll have to be similarly wary if they face the Wolverines. Michigan led 1-0 in College Park before defender Madison Richardson left the game with an injury, opening up holes in the backline that Giles exploited. Richardson has since returned and shored up the defense. Michigan also leads the Big Ten in caused turnovers and has three players with at least 40 points at its disposal.

“We’re prepared for anything,” Reese said. “That’s what we learned during the first half.”