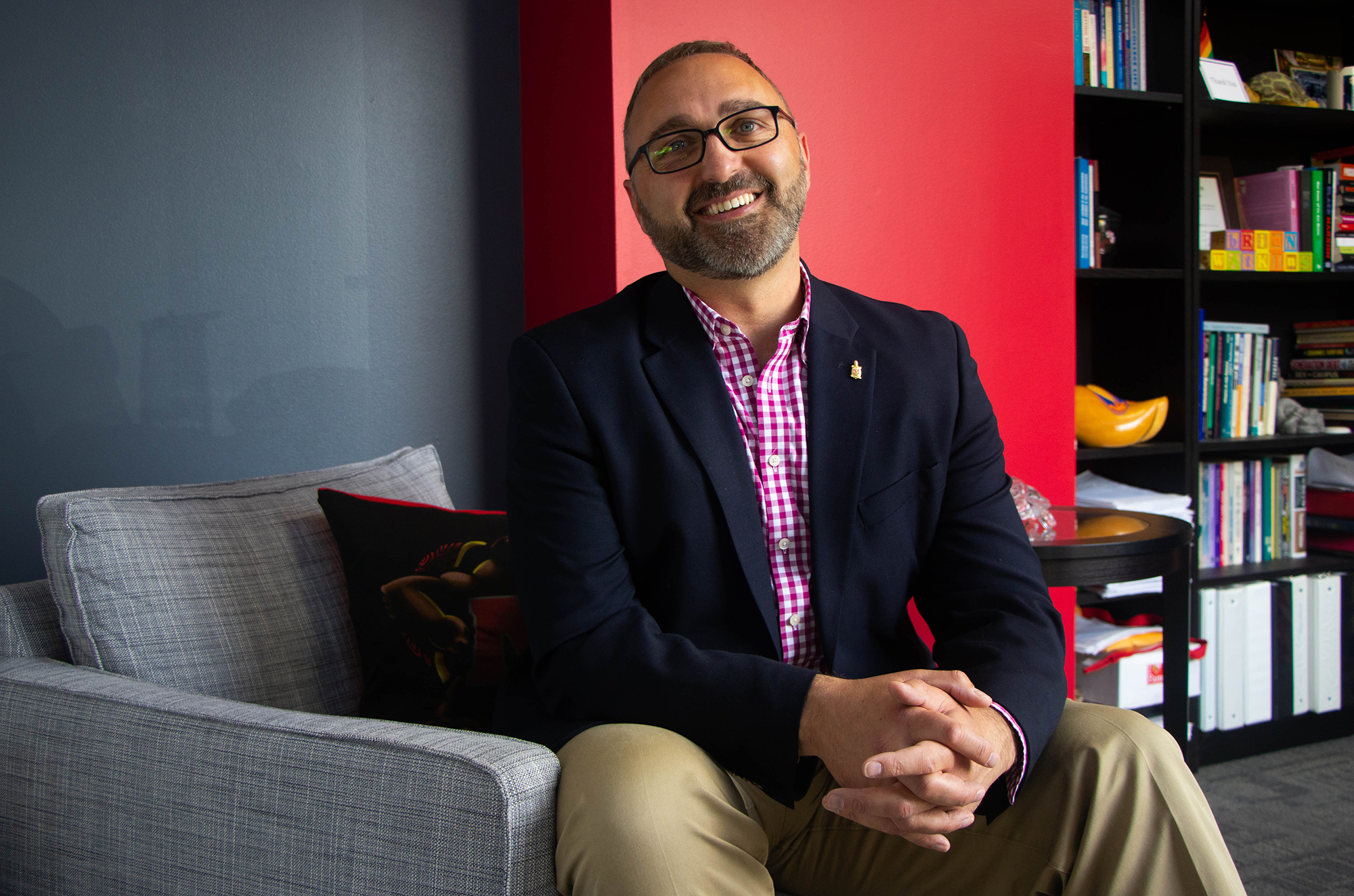 Brian Watkins, the director of Parent and Family Affairs, in his office in the Artemesia building. (Julia Nikhinson/The Diamondback)

For some University of Maryland students, skipping a class for an event with free food can mean not having to skip a meal later on, according to interviews conducted for a recent research study.

A soon-to-be-released study conducted on behalf of the Campus Pantry found that about 20 percent of students at this university don’t have reliable access to nutritious food. Now, a director in the Division of Student Affairs is pushing professors to list out campus resources in their course syllabi for these students and others struggling with “invisible” hardships.

Brian Watkins, director of the parent and family affairs office, said these hardships — food and housing insecurity, for instance — can have a major impact on a student’s academic performance.

“I think this is one very effective way of letting students know [No. 1], that a faculty member cares, and No. 2, that we do have resources on campus that can be helpful to students,” he said.

Current syllabi list campus policies on plagiarism and encourage students to share their preferred pronouns with their instructors. However, Watkins wants them to also include information about the Campus Pantry, counseling and mental health services, the Student Crisis Fund and Fostering Terp Success, a program supporting students who are homeless, at risk of homelessness, currently in foster care or lacking a “supportive family system,” according to its website.

Watkins wants an added statement that reads, “Any student who has difficulty affording groceries or accessing sufficient food to eat every day, or who lacks a safe and stable place to live, and believes this may affect their performance in this course, is encouraged to use the resources listed below for support.”

This statement was adapted from one that Sara Goldrick-Rab had written for course syllabi at Temple University, where she is a professor.

In December, Watkins and a group of faculty and students from Fostering Terp Success used her statement to frame one for this university, then shared it with the entities mentioned.

Yu-Wei Wang, a researcher in the Counseling Center studying food insecurity on this campus, voiced support for the proposed statement. She noted an ongoing study that has shown a significant link between a student’s academic performance and their access to basic resources.

“It’s understandable that when we are hungry we cannot focus,” Wang said.

While Kaylee Towey, a sophomore communication and finance major, praised the initiative’s intentions, she questioned its effectiveness.

Towey works in the Office of Student Conduct, where she said she often hears reprimanded students complain they didn’t know their actions violated the university’s honor code, despite its inclusion in campus syllabi.

“It’s a really good idea to help students and make them aware of those resources,” Towey said, “but I don’t know if the syllabus is the best way because most people I know don’t read the syllabus.”

Towey suggested the university also spread awareness for available resources by reaching out to students in highly-visited areas, such as Stamp Student Union.

Still, Watkins emphasized encouraging professors to include the statement in their syllabi as a step in the right direction.

Psyche Williams-Forson, the department of American studies chairwoman, is one faculty member working to support the initiative. She has encouraged all of her professors and faculty members to include the basic needs statement in their syllabi.

“I drew attention to it for the faculty so that they knew, and I’m quite certain most of them will follow through because we have that level of care for our students,” she said.

The department also has baskets of free food located in Tawes Hall. The baskets, which are available to students throughout the day, typically include items like fresh fruit and cups of instant noodles.

Williams-Forson has a background studying food insecurity primarily within African American communities. She said she heard about the statement in January and was glad people at this university were working to bring awareness to the issue.

Still, she stressed the initiative aims mainly to “help people seek help” — and isn’t a solution for those lacking basic necessities.

“We need to start somewhere,” Watkins said, “and something is better than nothing.”

CORRECTION: Due to an editing error, a previous version of this story’s headline referred to Brian Watkins as a faculty member. He is a university official. The headline has been updated.