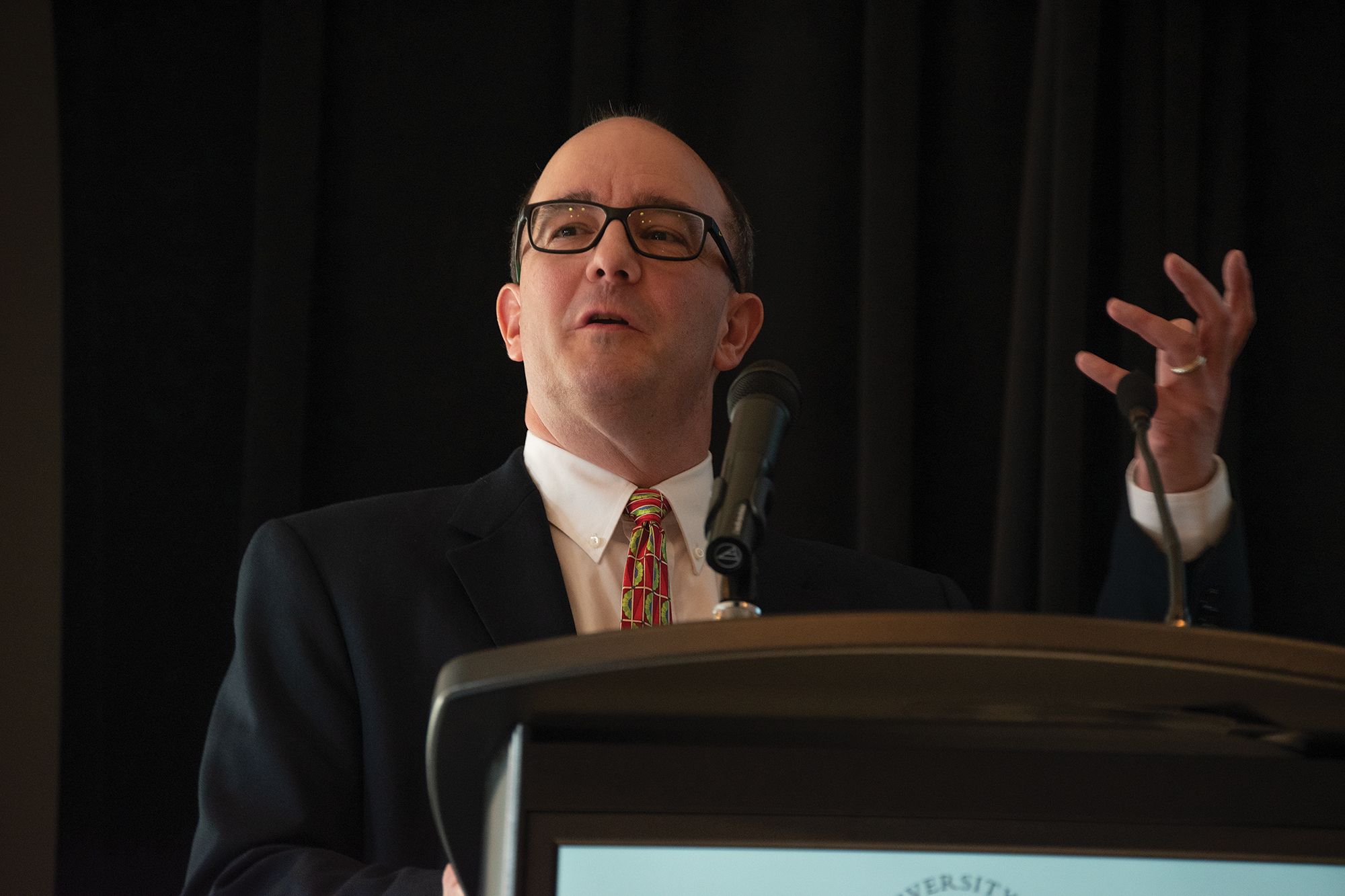 Chair of the Course Evaluation Subcommittee Philip T. Evers presents the findings of the committee to the University Senate Wednesday. Evers' presentation was met with a mix of support and criticism from the Senate. (Joe Ryan/The Diamondback)

Every semester, the University of Maryland asks its students to evaluate their professors — but University Senate members recommended overhauling that system at a meeting Wednesday, calling it ineffective.

The current evaluation system, CourseEvalUM, has been in place since 2008. It asks students to rank their professor in a variety of factors and leave comments about how effective they are as an instructor. The university then uses that data in faculty performance reviews.

But Philip Evers, Course Evaluation Subcommittee chair, said the system fails to provide a holistic look at an instructor’s performance, measure what students have learned or offer meaningful feedback for professors.

Course evaluation improvements were first proposed in January 2017. Evers and the rest of the subcommittee were then tasked with recommending improvements to the feedback method. Wednesday’s briefing suggested the evaluation questions be revamped so instructors receive more specific, actionable feedback.

They suggested asking students whether assignment and grading expectations made sense, whether the course was intellectually stimulating and whether instructor feedback was high-quality and timely.

History professor Marsha Rozenblit, who serves on the senate as a tenured faculty member, applauded the recommendations but remains concerned about evaluations’ low response rate.

“I think most faculty feel that students who actually respond are students who either love you or hate you, and not the broad middle,” Rozenblit said. “The response rate is too low to be meaningful.”

Evers agreed, but said it was a difficult issue to deal with, since the subcommittee didn’t want to mandate that students complete the evaluations.

Harry Huntley, an undergraduate senator, supported the recommendations but was concerned students wouldn’t have enough information to say how they felt about their grade.

“It asks on there, ‘Do you feel you deserve your grade?” and that’s something that a lot of students have brought up to me — that we do these before we get our final grades and even before we take our final exam,” said Huntley, a junior agricultural science and technology and economics major.

Faculty also raised concerns about comparing data between the old and new set of questions.

“Despite the flaws in the current system … one of the advantages — since we’ve done it for so many years — is that we know how to interpret the data, the numbers we get and the comments we get,” chemistry professor and former Senate Chairman Dan Falvey said. “Maybe a couple of the survey items that were used previously could be carried over, just so we can have a constant to compare.”

Evers said the committee agreed with Falvey’s concern, but he believes changing the questions at any point would cause a slight break in the data, so it doesn’t dissuade him from wanting to do so now.

Additionally, the subcommittee found that some students responded to professors with racist, sexist or otherwise contemptuous remarks in the open-ended section of the evaluation.

Doug Roberts, a physics professor and undergraduate studies associate dean who also worked on the subcommittee, confirmed they were aware of biases and inappropriate comments on the surveys, and recommended that questions clarify language expectations for students.

After feedback is factored in, the report is slated to move to the full Academic Procedures and Standards Committee, the senate’s group that deals with examining and setting academic policies for revisions, Evers said. If the committee approves, it will then move to the full senate for a debate and vote.

There is no timeline for rolling out the new system, but Evers hopes it will be implemented at the start of the 2020-21 academic year.