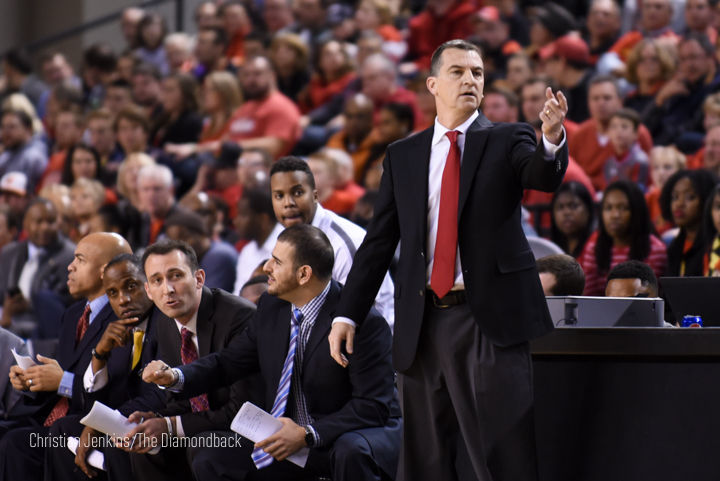 Coach Mark Turgeon directs his team during the Terps’ 82-61 win over Princeton at Royal Farms Arena in Baltimore on Dec. 19, 2015. (Christian Jenkins/The Diamondback)

Jon Rothstein of CBS Sports first reported that Broadus was “finalizing a contract” on Monday to take over the Bears, who didn’t re-sign coach Todd Bozeman when his deal ended April 25.

Broadus has a history of being a strong local recruiter, and he joined coach Mark Turgeon’s staff in 2017. He helped add guard Serrel Smith and forward Ricky Lindo to the Terps’ 2018 class, which ranked No. 1 in the Big Ten and No. 7 in the nation, according to 247Sports.

The 55-year-old swayed centers Makhel Mitchell and Makhi Mitchell to join the class of 2019, along with Donta Scott, a three-star small forward from Philadelphia. Broadus also led the recruiting efforts for four-star point guard Marcus Dockery from Bishop O’Connell High School, a verbal commit to the class of 2020.

Before Maryland, Broadus spent nine years at Georgetown between two stints, reaching the Final Four in 2007. After the NCAA tournament run with the Hoyas, Broadus became Binghamton’s head coach.

In his second season in charge of the Bearcats, Broadus’ squad won 23 games and made the NCAA tournament for the first time in program history, losing to Duke in the first round. That offseason, though, Broadus resigned after an NCAA investigation unearthed recruiting violations within his staff.

The Washington, D.C., area native received a $1.2 million settlement from Binghamton, contingent on his resignation. The NCAA cleared the school of any major violations during Broadus’ two-year reign, and he joined Georgetown again in 2011.

Maryland’s coaching staff has featured turnover each of the last two offseasons. In 2017, Broadus was hired to replace assistant coach Cliff Warren, who left for UMass. Last year, Matt Brady was moved to an assistant coaching role after Dustin Clark departed.

Morgan State, a Mid-Eastern Athletic Conference team and a historically black university in Baltimore, hasn’t finished above .500 since the 2012-13 season.

CORRECTION: Due to an editing error, a previous version of this story’s photo caption identified assistant coach Bino Ranson as assistant coach Kevin Broadus. The photo and caption have been updated.