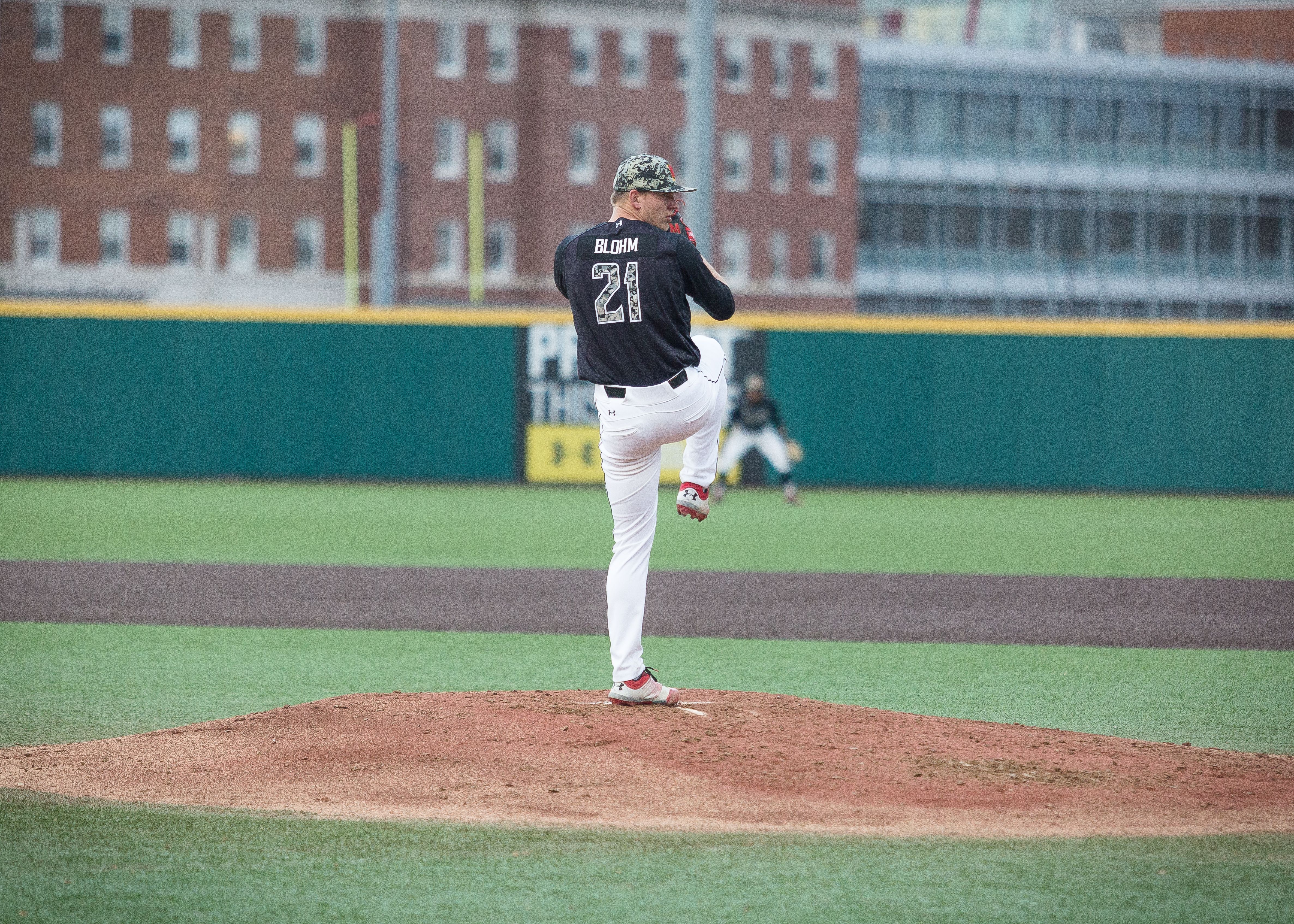 Pitcher Tyler Blohm winds up for a pitch during Maryland’s 7-1 victory over Illinois on April 6, 2018 at Bob “Turtle” Smith Stadium. (Marquise McKine/The DIamondback)

“I don’t know what’s going to happen,” Vaughn told Blohm, “but it felt really good to write your name on the lineup card.”

Blohm missed time at the end of the 2018 season with shoulder soreness, and he was still recovering at the beginning of the 2019 campaign. In his first start of the year — also against the Rams at the season-opening tournament in Conway, South Carolina — his fastball sputtered out of his hand in the high 70s, his curveball was ineffective and he lasted 2 ⅓ innings, walking two and giving up two hits.

The dip in velocity was a worrying sign for Blohm, prompting a series of visits to doctors. When it became evident he needed physical therapy instead of surgery to increase his shoulder’s range of motion, he began a comeback attempt that led him to the mound Tuesday.

His first pitch missed outside. His second pitch was lifted toward right-center field and kept carrying until it cleared the yard — “I personally thought it was a fly ball,” Blohm said. “This game will humble you.”

From there, Blohm settled in, striking out three in two innings before hitting his pitch-count limit. After a lengthy recovery process kept the southpaw away from the mound for two months, his two-inning cameo was a welcome development and an encouraging sign for Maryland as it prepares for the final month of the regular season.

“[He was] back to the Tyler Blohm that we know,” Vaughn said. “To see him get rewarded for all his hard work — and to see him back on the field this year when I frankly didn’t know if we were going to get him back this year — [I’m] very happy for him and obviously, it’s huge for us down the stretch.”

When third baseman Brett Norwood swung at Blohm’s low fastball on the second pitch of the game, Blohm turned and adjusted his sleeve nonchalantly. Center fielder Randy Bednar tracked the ball into the gap, climbed the fence and clung to the top as the ball passed over for a leadoff homer.

It wasn’t the ideal start for Blohm. But he punched out shortstop Zac Ching with a curveball in the dirt in the next at-bat. His fastball returned to the low 90s, his breaking pitches had life and Blohm looked more like the pitcher who earned Big Ten Freshman of the Year honors in 2017.

Another breaking ball caught catcher Josh Simon swinging for the second out in the second. And despite a 30-pitch limit, Vaughn loosened Blohm’s leash, allowing him to finish the frame. The Severna Park native’s 34th pitch Tuesday fell into the strike zone, freezing right fielder Alex Taylor for Blohm’s third strikeout.

“With the curveball, too,” Blohm said. “That’s something I didn’t have when I first started 2019, and it’s something that I take a lot of pride in.”

While Blohm remained sidelined, he watched tape. He consulted with his father, infielder Kody Milton’s father and pitching coach Corey Muscara. And then he noticed how his arm action was shorter than usual.

The unnatural delivery was throwing off his results.

“Nothing really felt right,” Blohm said. “Everybody’s different. Some guys, long-arm action works, some guys short-arm action works. You’ve just got to find the happy medium for you, whatever works for you. And this is what works for me.”

He returned to his long delivery during Maryland’s 10-5 win over VCU. After the contest, Blohm left the dugout and talked his outing over with his father. Tuesday was the first day Blohm was cleared to pitch in a game, and he wasted no time getting back in the action.

His family was in the crowd at Bob “Turtle” Smith Stadium. And when Blohm woke up Tuesday morning knowing he’d be on the mound again that afternoon, he felt some pre-game jitters.

Perhaps the second-pitch dinger he allowed was a product of that. But Blohm rebounded well, capping his outing in style with two strikeouts to end the second inning. It gave the Terps hope the junior can be a valuable contributor once again as they attempt to clinch a Big Ten tournament spot.

Tuesday was just the start.

“We’re all very excited,” Blohm said. “This is a push in the right direction, and we’re just going to keep it going.”