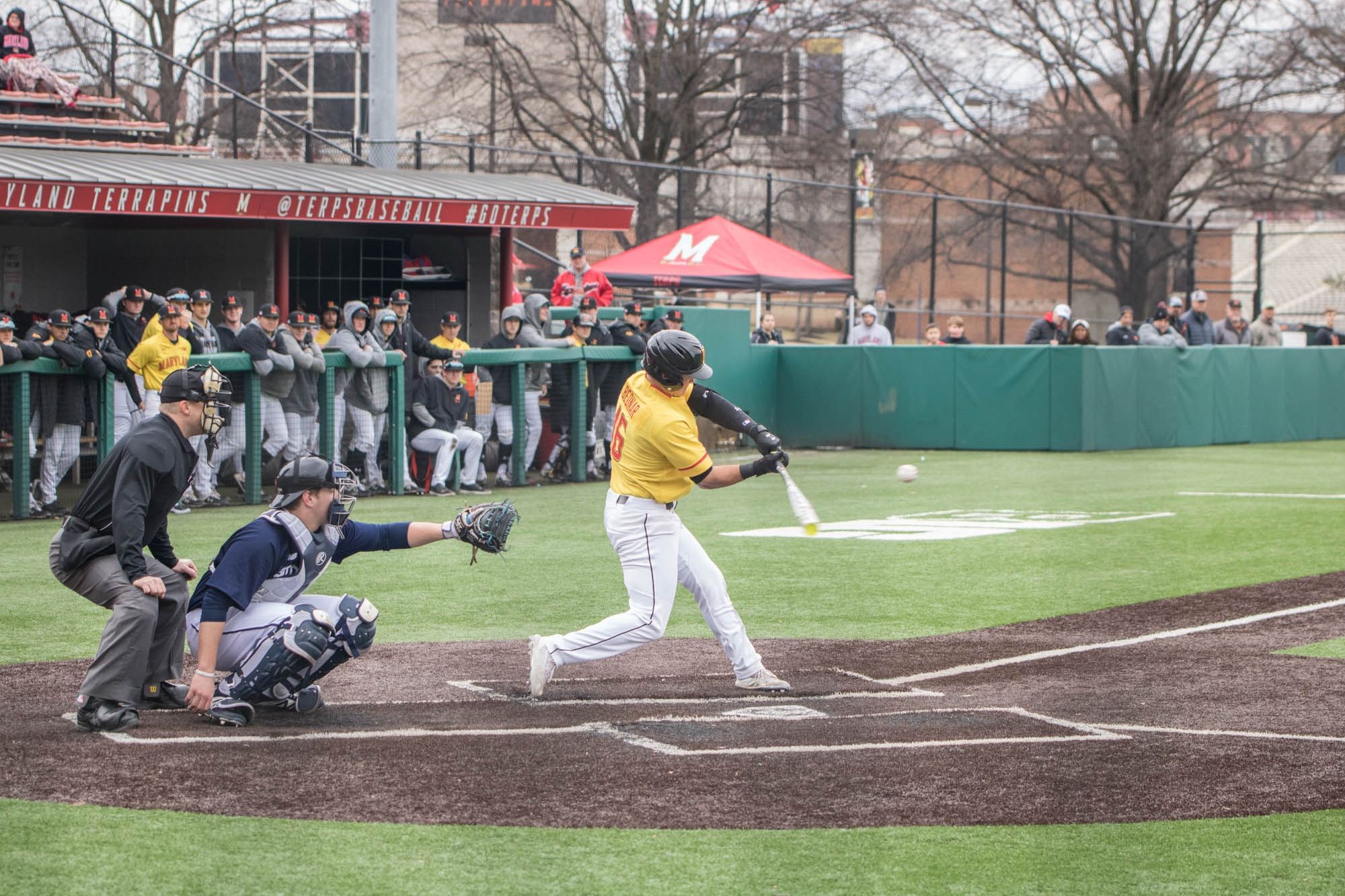 Despite the abrupt and unfavorable result to open his first start in over two months, Blohm settled in, striking out three while allowing two hits and just Norwood to cross the plate in two innings of work Tuesday in his return from injury.

The Terps’ offense supplemented his outing with five runs in the first two innings, and Maryland added three in the fourth and one apiece in the fifth and seventh frames to end its midweek drought with a 10-5 win over VCU at Bob “Turtle” Smith Stadium.

“That was awesome. I mean, I gave up an early homer, and that could lead to a disaster,” Blohm said. “But I think the way the guys’ offense responded, we’ve been doing really well these past few games.”

The Terps (20-21) tallied 17 hits in the game to sweep the season series over the Rams (28-13) and relied largely on their bullpen to keep VCU’s lineup at bay.

Center fielder Randy Bednar began the offensive outburst in the bottom of the first, doubling to right field. Two batters later, first baseman Maxwell Costes knocked the first pitch he saw into center field to drive in Bednar and even the score at one.

Blohm returned to the rubber for the second inning, where he induced a ground out before striking out the next two he faced for a three-up, three-down inning.

“It was amazing,” second baseman Benjamin Cowles said about Blohm’s return. “It fired me up when he got the strike-three call [to end the second].”

Left fielder Ben Irvine grounded out to drive in one, and Bednar, who finished the day 4-for-5, singled to left to drive in Pineiro and Cowles. Third baseman Taylor Wright then doubled to bring Bednar around from first and increase Maryland’s lead to 5-1.

In the third inning, Vaughn inserted right-hander Daniel O’Connor in relief of Blohm, whose pitch count limit was around 30 pitches. The freshman reliever entered Tuesday having surrendered 15 walks in 14 innings, and he once again struggled with his control.

O’Connor gave free passes to the first two batters he faced, allowed three runs and recorded just one out before being lifted after four batters.

In the bottom of the fourth, the Rams appeared well on their way to a clean inning with no runners on and two outs, but shortstop AJ Lee provoked a two-out rally with a home run over the left-field fence.

Bednar and Wright followed Lee’s shot with a single each, and both were driven in when designated hitter Josh Maguire ripped a single up the middle to extend the Maryland lead back to four, at 8-4.

Costes’ first inning two-out RBI started Maryland’s success with two outs on the day, and Maguire concluded it in the fourth. In all, the Terps scored seven times while facing two outs in an inning.

“Maxwell gets that big two-out hit in the first, which I think allowed everybody to breathe a little bit,” Vaughn said. “I thought we were just really tough with two outs.”

Maryland added two additional runs, including a Cowles solo home run in the fifth frame. The sizable advantage was all Vaughn’s bullpen needed, as four pitchers combined to allow just one run and three hits to rebound from O’Connor’s shaky performance.

Following the midweek victory over VCU, the Terps will attempt to carry their offensive output into the weekend series against Big Ten foe Penn State, which has been on the winning end of only one conference game this season.

Maryland will enter the set with the Nittany Lions having notched double-digit hit totals in three of its last four games.

“Knock on wood,” Blohm said. “Hopefully we keep it up.”