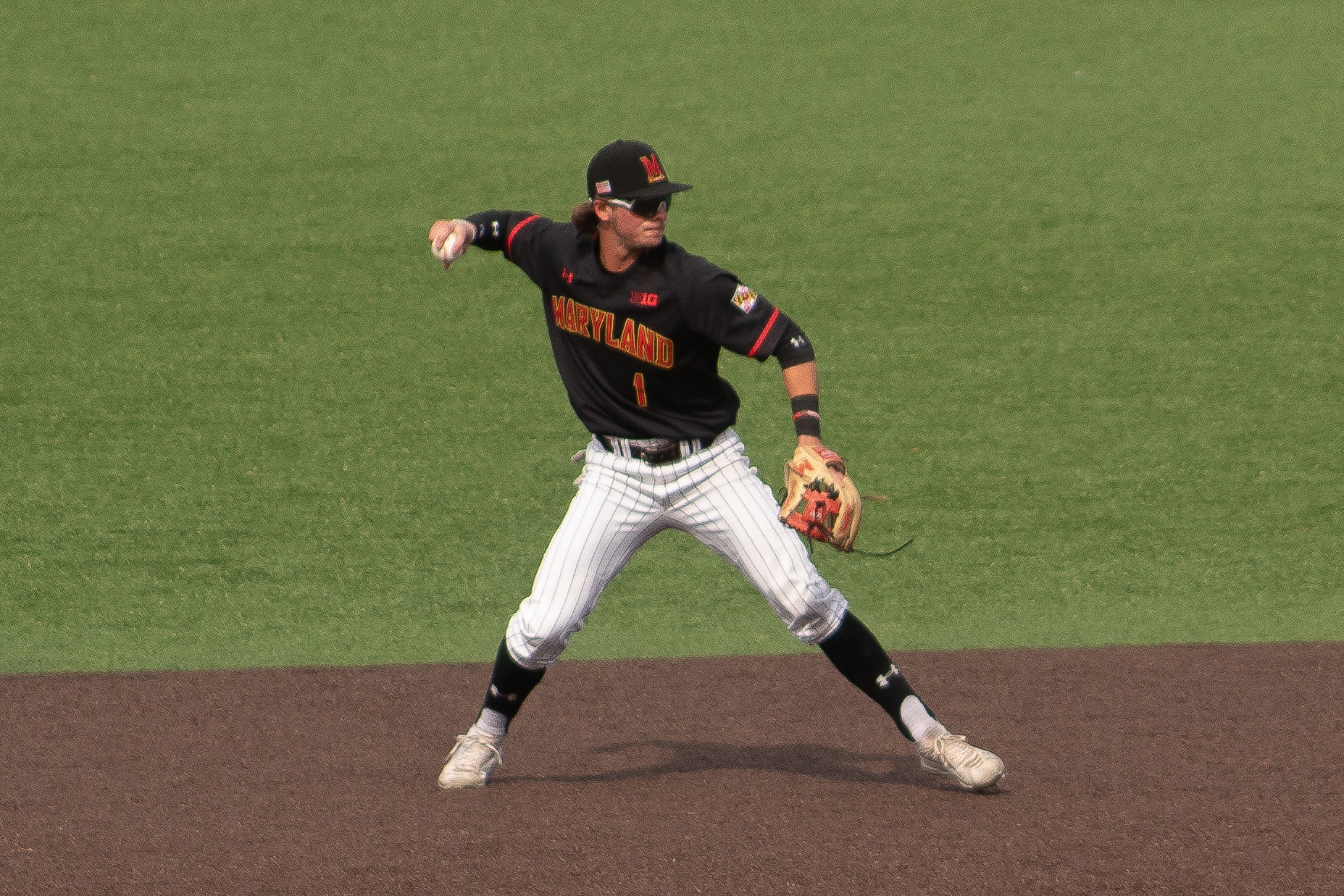 Shortly before Ridge Winand reached home plate for the second time in as many innings Sunday, the Ohio State center fielder removed his helmet. Then, when he had touched all four bases once again, he bumped helmets with the other two Buckeyes waiting for him.

Against right-hander Trevor LaBonte — who had allowed just three longballs in 40 innings before Maryland baseball’s series finale — Winand blasted home runs in the second and third innings. The second of them, a towering drive beyond the right-center field fence to knock in two other baserunners, gave Ohio State a four-run lead.

Winand’s contributions provided more than enough run support for left-hander Griffan Smith, who shut down the Terps’ lineup to earn the Buckeyes a series win. Smith hurled a complete game, allowing one run on four hits while striking out a career-high 10 batters in Maryland’s 5-1 loss.

LaBonte gave up eight hits in his six innings, but besides from Winand’s homers, the freshman largely mitigated damage and gave up one hit in his last three frames.

The Terps threatened Smith for the first time in the third inning, when second baseman Benjamin Cowles hit a leadoff double and left fielder Ben Irvine moved Cowles to third with a groundout to the right side. Then, opting to get on the board and cut into the 4-0 deficit, shortstop AJ Lee scored Cowles with a bunt.

Center fielder Randy Bednar followed with a first-pitch double and Smith walked third baseman Taylor Wright to bring first baseman Maxwell Costes — the tying run — to the plate. But the freshman, who has so frequently ignited Maryland’s offense, went down swinging.

In the fourth, catcher Justin Vought knocked a one-out double down the left-field line and right fielder Michael Pineiro was hit by a pitch to put pressure on Smith again. But the sophomore southpaw got Cowles to pop up and forced a fielder’s choice to escape unscathed.

From there, though, Smith was untouchable. He allowed one baserunner in his final five innings — a sixth-inning walk — and Ohio State tacked on another run from right fielder Dominic Canzone’s double in the eighth.

For the Terps, Sunday’s loss prevented them securing their third straight conference series win for the first time since 2003. And the series-ending dud comes on the back of a disappointing ending to Saturday’s doubleheader.

Maryland (19-21) had knocked the ball around in both games, totalling 36 hits, including 20 in the 14-8 win in game one. Coach Rob Vaughn’s squad had 16 hits in the nightcap, but an inconsistent bullpen allowed Ohio State (22-19) to come back.

The Terps needed six more outs, but allowed four runs in the eighth and closer John Murphy couldn’t shut the door in the ninth — a task complicated by an error. The Buckeyes picked up the winning run in the 11th.

So, despite scoring 22 runs in the first 14 innings of the weekend, Maryland produced just two in the final 15 frames, dooming the Terps to a series loss.