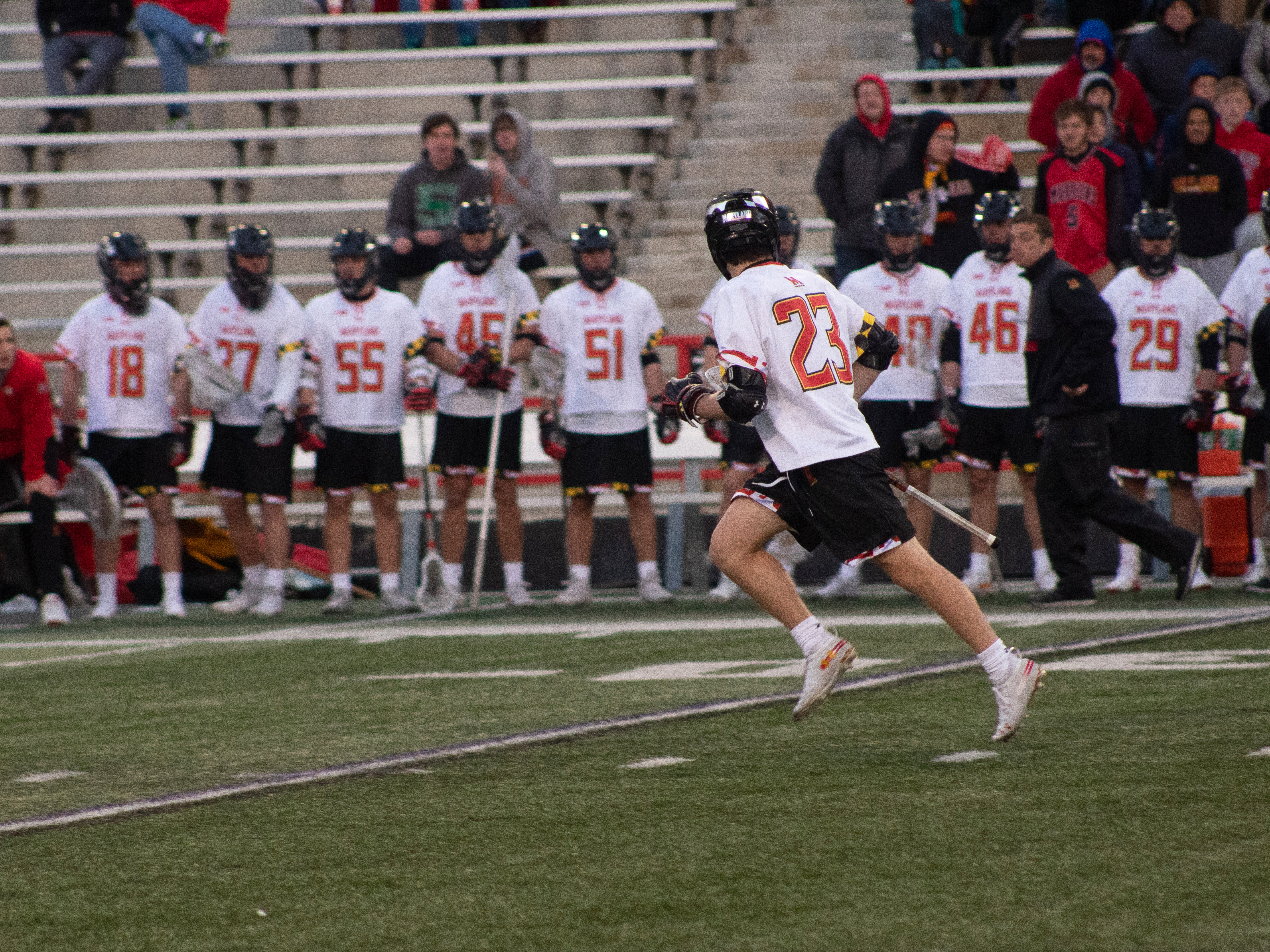 With Maryland men’s lacrosse trailing by one goal and about 2:30 remaining in Saturday’s game against then-No. 9 Ohio State, midfielder Kyle Long raced from behind the net to the side of the crease, trying to pick out a pass.

For the first time this year, the freshman — who joined Anthony DeMaio and Bubba Fairman while Will Snider slid into the second unit — found himself with the first midfield line during the entirety of a game.

Despite the personnel adjustment, the unit worked in harmony. Long waited for a passing lane to open up before zipping a pass across the goalmouth to a wide-open DeMaio in front of the cage.

Although DeMaio’s close-in shot sailed wide, the chance Long created offered a glimpse of what his inclusion in the first line could mean for the group. Snider still registered an assist on the second line during the 10-9 overtime win, and the versatility from both to contribute with the first unit is a plus for the No. 2 Terps as postseason play approaches.

“We feel like we can play both [Long and Snider] with that group,” coach John Tillman said. “There’s always a little bit of an adjustment period on all sides, but I do think that helped and that was positive.”

Tillman said the coaches had been experimenting with using Long on the first midfield line during practice, and felt it was the time to give him more looks alongside Fairman and DeMaio.

Long has tallied six goals and nine assists through the first 13 games of the season, and has shown the ability to create plays for others with his crisp passing.

“He’s just a really good player,” attackman Jared Bernhardt said. “A good IQ guy, great vision and he’s done a tremendous job as a freshman doing what he does best.”

The playmaking and creativity Long brings could help DeMaio and Fairman — two proven scorers — find open looks. Although Long didn’t record a point against the Buckeyes, the first midfield group produced one goal and two assists.

When that midfield trio was kept on the sideline, midfielders Russell Masci, Christian Zawadzki and Snider managed to produce, too.

“We run those guys a lot because they’re really good players,” defender Matt Rahill said. “So having some of those guys step up in a big game today is huge. But it’s no surprise there.”

[Read more: Maryland men’s lacrosse stays at No. 2 in rankings after beating Ohio State in OT]

Snider dished an assist on the Terps’ first goal of the game, Masci scored his second career goal and Zawadzki scored for the second consecutive week.

With Snider’s presence, the second midfield unit featured three upperclassmen — two seniors and one junior — playing together, making plays for one another and the attackmen on the field.

“Sometimes what you’re kind of looking at is chemistry with guys,” Tillman said. “And we had talked to Will and said, ‘Hey, we’re going to obviously give Kyle a little bit of an opportunity here. But just know, what you bring to that group chemistry-wise might make that group better as well.’”

Throughout the season, Tillman has spoken about the need for at least six midfielders being consistent scoring threats. The ninth-year coach has seen how the depth of his midfield can bring about success. In Maryland’s 2017 national championship victory, then-second line midfielder Adam DiMillo scored two goals to help the Terps win their first title since 1975.

During Saturday’s game against Ohio State, this year’s edition of the second midfield line paced the Terps early on, scoring or assisting on three of the team’s first six goals. That first-half production allowed Maryland to build an early cushion before winning the overtime game that clinched an appearance in the Big Ten tournament.

“I felt like those guys had a huge impact on the game. They gave us a lot, especially early,” Tillman said. “When that group can give us some really good opportunities, man, that’s huge.”