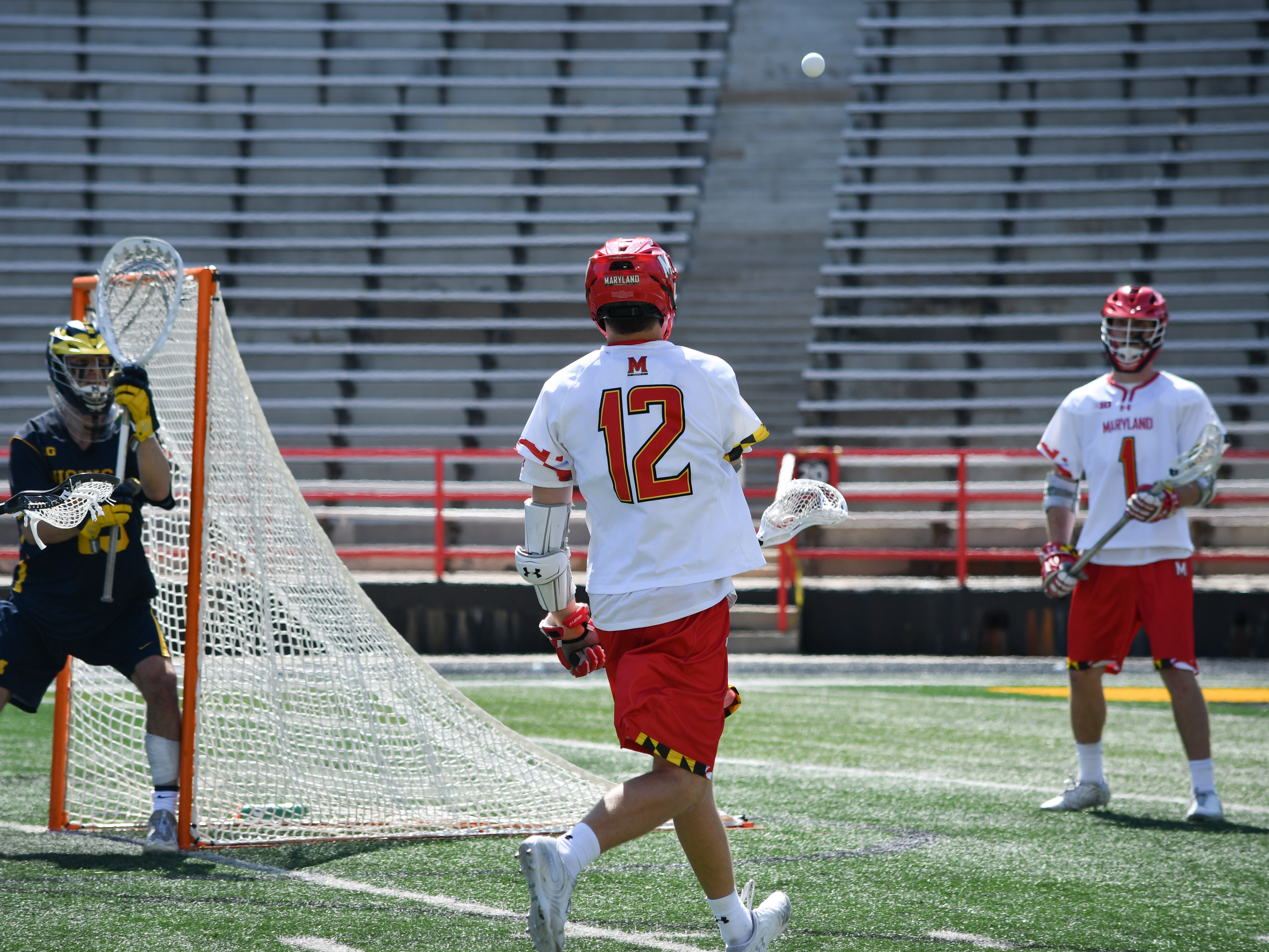 In the brief intermission between the end of the fourth quarter and the start of overtime, Maryland men’s lacrosse’s offensive coordinator J.L. Reppert gathered the offensive players with one play in mind.

The plan was to get the ball to attackman Jared Bernhardt, then have another player set a screen toward the top of the offensive set. After an Ohio State faceoff violation to begin overtime, the play unfolded on the field.

Midfielder Bubba Fairman set the pick to free Bernhardt, who charged to the cage. And when his diving shot ended in the back of the net, Bernhardt was swarmed by his teammates, elated by the No. 2 Terps’ 10-9 win over the No. 9 Buckeyes.

Attackman Logan Wisnauskas was in the middle of the throng around Bernhardt. Wisnauskas had scored the game-tying goal with 23 seconds left in regulation, setting the stage for Bernhardt’s heroics. When the Terps needed it most, their one-two punch of Bernhardt and Wisnauskas answered the call, as they have so often before.

“They’re two of the best in the business,” defender Matt Rahill said. “It definitely takes a lot of pressure off the defense knowing that we’ve got two guys that can put the ball in the back of the net consistently.”

The score that forced extra time came off of a skip-pass delivery from midfielder Anthony DeMaio to Wisnauskas. Buckeyes defender Joey Salisbury hedged too far off the lefty shooter, and Wisnauskas buried his third goal of the afternoon to even the score.

Wisnauskas has shown a knack for shining in clutch moments this season. In each of Maryland’s three overtime games this season — Penn, Notre Dame and Ohio State — the redshirt sophomore has scored or assisted on the goal that propels the Terps into the additional period.

Following Wisnauskas’ latest game-saving antics, Bernhardt helped concoct the plan before the opening faceoff of overtime. Coach John Tillman said the junior captain talked to Reppert to find the best method of attack, then discussed the type of pick he wanted from Fairman.

“We had some things ready, and that was the first one,” Tillman said. “It worked out really well. So that was a great call by [Reppert] and great execution by [Bernhardt].”

Despite entering Saturday with a hat trick in each of his six previous games, Bernhardt didn’t get on the scoresheet until midway through the fourth quarter against Ohio State. With defender Matt Borges playing Bernhardt tightly, Fairman’s pick was a key part of the game-winning score, finally offering Bernhardt enough room to make a play.

But even without Bernhardt’s typical production, Tillman didn’t see him trying to do too much. Instead, Bernhardt created opportunities for others with his passing. He set picks and constantly commanded the attention of the Buckeyes’ top defender.

“He’s obviously a terrific player, but he can find different ways to help the offense,” Tillman said. “I’ve coached guys where the ball, if it’s not in their stick, they’re a little disinterested. They don’t try as hard, they don’t play as hard. And then, everybody is penalized there.”

But with the game on the line, there was Wisnauskas, firing home with 23 seconds left to force overtime and set the stage for Bernhardt. And on the game-winning score, had the field not opened up for Bernhardt, he said he would have dished it off to the open man.

The seam was there, though, and Bernhardt’s and Wisnauskas late goals helped clinch the Terps’ spot in the Big Ten tournament.

“We have a lot of capable guys,” said Bernhardt, whose first college overtime goal also marked his 100th career score. “You just work within the offense, get the ball moving and good things will happen.”