To reform UMD, we need our student leaders to look past their differences 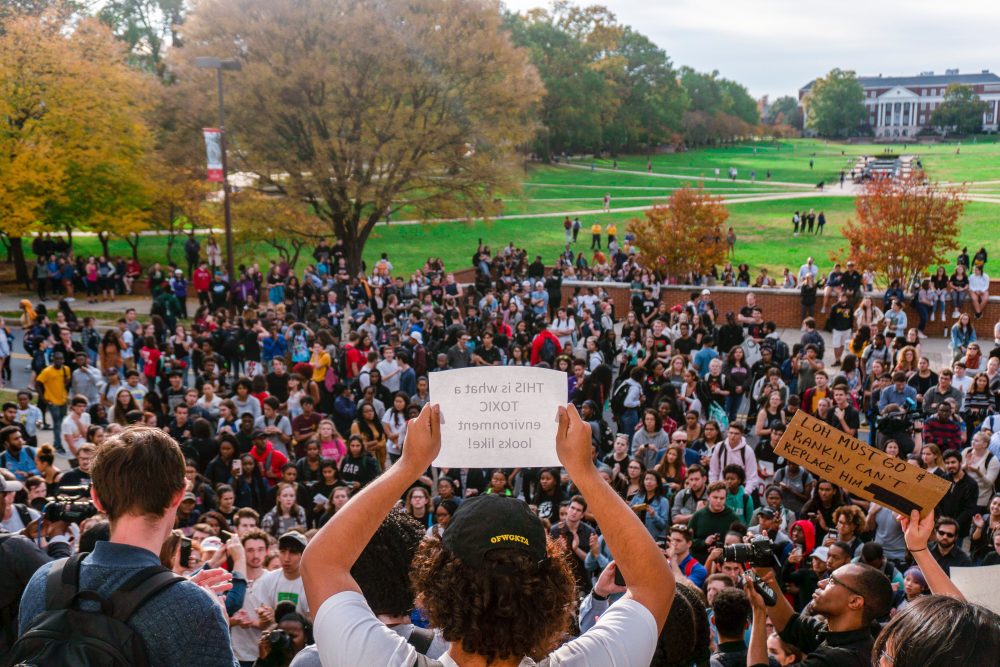 A crowd of students gathers in front of the Main Administration Building during the “Justice for Jordan” protest on Nov. 1, 2018. (Photo courtesy of Jon Orbach)

The SGA elections have been messy this year. From resignation letters to accusations of racism, campaign rules violations to postponed elections, it’s been dizzying just to keep up with it all.

The Diamondback’s editorial board recently argued that though Taylor Green would have been most fit to fight the status quo as Student Government Association president, no one candidate will be able to change the fact that the SGA’s powers on this campus are limited. They’re absolutely correct: No one ticket or candidate will change that.

But given the list of tragedies and misdeeds that have taken place on the campus over the past year, we as students can no longer accept an SGA that submits to the whims of this university’s administration, which has harmed its students in search of profit and prestige.

To transform into a body with substantive power to advance student interests, the SGA needs a mixed coalition of both experienced student leaders who can operate within the established procedures and student activists who challenge the status-quo. These two sides have battled for power in this week’s elections, but going forward, they must put aside any personal disagreements to take on the administration together.

While many differences between candidates have been substantive, much of the conflict between student activists and the SGA seems to stem from long-standing personal disagreements. On both sides, I’ve observed an unhealthy fixation on the personal shortcomings or personality defects of specific individuals that negatively color others’ perceptions of entire groups those individuals are involved in.

Several students who organized the Fire the Liars rally this past fall did not want to collaborate with the SGA after learning of old conflicts between SGA members and alumni student activists. On the flip side, some SGA members are wary of collaborating with this university’s chapter of Students for Justice in Palestine due to negative personal experiences they’ve heard about from SJP chapters at other universities. Similarly, the debate between the Empower Maryland and Unite UMD tickets seems to revolve largely around he-said-she-said stories about the past behaviors and personality traits of individual leaders and their friends.

The mistrust is certainly warranted, given the fraught history between individual activists and SGA members and the ensuing allegations that have arisen. It’s good that all of these fault lines are finally being exposed and that individuals are being called out by name for their behavior. It’s forcing a conversation on what we value as students: what behaviors we want our leaders to exhibit and what changes we want to see.

Yet as student leaders, we have so much to fight for together — and we cannot let these personal conflicts stop us from pursuing bold collective action. Next year’s SGA will face a wide range of both challenges and opportunities. They will be called on to repair divisions and heal years of mistrust between marginalized students, activist groups and the SGA. They’ll be asked to dedicate funding to student groups and comment on every tragedy that takes place on our campus — to work both in collaboration with administrators and also against them.

I hope Ireland Lesley and the rest of the legislators and executive board members who won this year — regardless of the ticket they ran on — will hear those calls and get to work. And I hope that Empower Maryland, which won most of the seats it was running for, will make sure that the voices of legislators who won seats on the YOU Ticket and Unite UMD are heard.

Shining a light on unacceptable behaviors of those in power can help us re-evaluate our collective priorities, but student leaders can’t keep resorting to personal attacks as a substitute for tough conversations on reshaping university policy with people they disagree with. They must leverage each other’s strengths rather than exposing each other’s weaknesses. They should also support students who stage protests and sit-ins and those who call for meetings with administrators.

To achieve lasting student power on our campus, we need those who work within the SGA and those who work outside it to put personal differences aside and work together. No one ticket, candidate or organization can do it alone.