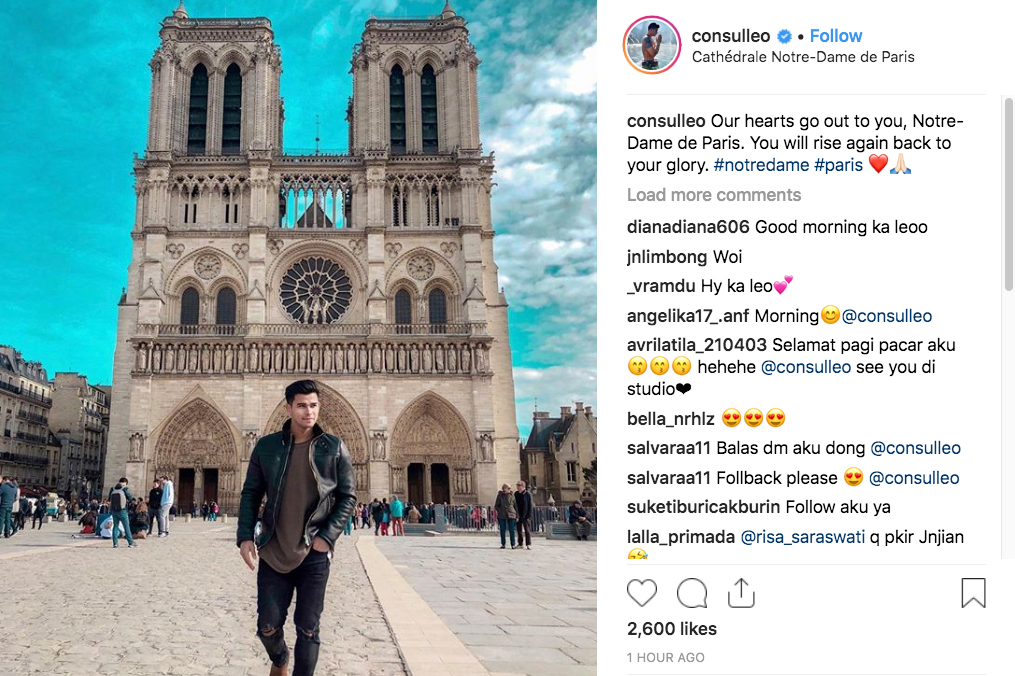 There are few things that we Homo sapiens love to talk about more than ourselves. It’s why we’ve dedicated entire social media platforms to the art of self-promotion and vanity. And while it may be annoying, it’s still nice to step back and realize that this is something unique to humans — we’re the only creatures on the planet with the self-awareness to self-promote.

Yes, many people argue that platforms like Instagram and Twitter are turning today’s young people into self-absorbed, perfectly edited, appearance-obsessed freaks. To that, I say: kind of. I don’t really care about how other people enjoy their lives, as long as they aren’t hurting anyone. Lip filler and all.

But even I have a tipping point, and I think it came these past few days with the fire at the Notre Dame Cathedral in Paris — destroying and endangering a huge collection of precious artifacts and pieces of art.

[Read more: Corporations should stop trying to be relatable on social media]

In response, many people started sharing photos of themselves in Paris across social media. How does that… make anything… better?

A solemn tribute to a landmark that brought you joy? Sure, that’s a reasonable thing to post on social media. But there are countless people all over my social media feeds posting photos of themselves either at Notre Dame or just some random-ass location in Paris. What does your presence there have to do with the tragedy at hand? Is your sadness over this collective loss more significant because you got to see the cathedral while you studied abroad in 2013?

I am feel uncomfortable when we are not about me?

Because we are living in the age of self-imaging and constant branding, this lack of self-awareness always comes out at its worst during global catastrophes such as this, and every single time it is painful to watch.

My earliest memory of this phenomenon is from the 2015 shooting in Paris, when gunmen massacred 130 people at and near the Bataclan theater. The hashtag #PrayForParis was created as a tribute to the victims and the city, but influencers still found a way to infiltrate the sentiment with provocative photos of themselves that simultaneously displayed their well-wishes for Parisians and their gloriously toned physiques.

If you’re one of those people who posted a photo of when you visited Notre Dame, I don’t want you to feel attacked. I understand that witnessing a human marvel like that in person is a once-in-a-lifetime experience, and it really is a shame that some parts of it may not survive the flames. But this is about understanding what social media is doing to our ability to process tragedies.

Somewhere in the mix of subtly-flexed visits to Paris, you are implying that your proximity to the place in question has given you a reason to post a tribute for your own personal loss. Stop making this about you; think of, you know, the priceless cultural significance Quasimodo’s home holds for millions of people.

Any time we lose a cultural icon like this cathedral — one of Paris’ biggest tourist attractions — we lose opportunities to teach future generations. There is so much history and culture that tomorrow’s children won’t be able to enjoy, and the pain and heartache of the French, and the world, is justified.

I don’t think you’re evil or narcissistic if you feel the need to make posts like these, but I do think it’s misguided. It’s important to realize that the best part about being an empathetic person is that you don’t need to make something about yourself to understand that it is, indeed, tragic.