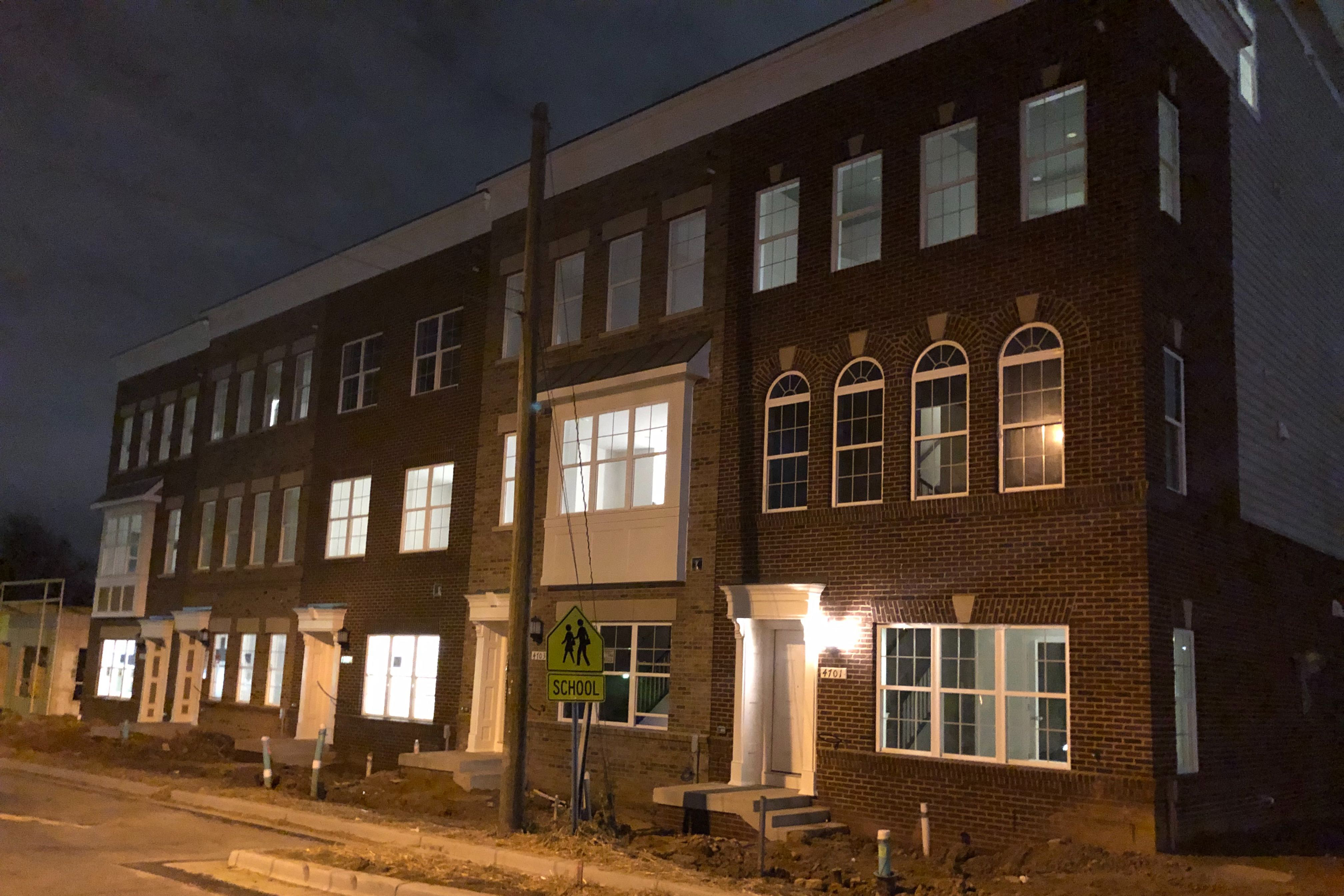 The Metropolitan at College Park, a 45-townhouse development, in 2019. (Jeff Barnes/For The Diamondback).

For more than 40 years, when Alan Bradford looked out from his backyard on 48th Place in College Park, he saw woods and the Berwyn Baptist Church.

But lately, that view has been altered by cranes and construction for a new townhouse development being built in the city — the Metropolitan at College Park.

For Bradford, who has lived in the area since 1973 and worked in construction for more than 20 years, the change is disappointing but expected.

“We knew it was going to change, but change is good sometimes,” Bradford said. “I don’t mind people moving into the neighborhood. We need more people.”

Some residents, however, aren’t as accepting of the change.

The 45-townhouse development, expected to be completed within 12 months, has been a controversial topic in College Park. At a September city council meeting and August public hearing, residents voiced concerns over the development, arguing that the site would lead to an increase in traffic on Rhode Island Avenue, already a problematic area.

At the meeting, council members also discussed the possibility of restricting street parking around the development to those who live in the area and hold permits for all but limited times during the week.

The council first considered this option in 2016, but delayed action at the time, as construction wasn’t imminent. However, it sent around a survey to gauge resident response to the proposition. Of the 93 households who responded, just over half— approximately 57 percent — favored requiring permits to park in the area.

But some residents, such as Mary Ann Hartnett, argued that the proposition showed the council and the development hadn’t considered parking needs before proceeding with construction.

“Since construction will not be completed for many months, the present concern for issuing parking permits leads me to believe that the City realizes that this is another project that is being allowed to be built without adequate parking,” she wrote in an August email to the council.

Hartnett also asked why the city hadn’t required that more parking be created before construction began: “Yes, it could mean fewer homes and less profit for a builder/taxing authority, but less hassle for those living there and the adjoining neighbors.”

Still, many people believe the development will create diversity among residents, as it would open up more housing options for families and others in an area dominated by student housing.

“There aren’t a lot of townhouses around,” Mayor Patrick Wojahn said. “I think this is going to be a good new project and I’m looking forward to seeing when it’s open.”

The development, which is within a mile of this university’s campus, has currently sold three of its 45 available home sites, said Chris Birth, a director of sales and marketing for Lennar Corporation, the Miami-based construction company in charge of the project.

The project offers homeowners three bedrooms, two full baths and two half baths, with options to customize and configure the layout to five bedrooms and four-and-a-half baths.

“I think with the opportunity to flex the plan into a five-bedroom home, it’s a perfect home for families,” Birth said.

Currently, the College Park City-University Partnership offers $15,000 in forgivable loans to certain university or city employees who want to purchase a home in the area through its homeownership program. Birth thinks this program will make the development an attractive option for this population.

The development could also interest investors who are seeking to create rental spaces for students, Birth added.

Ryan Chelton, the city’s economic development coordinator, said the company has started giving tours to prospective residents at its Beltsville development, which hosts a similar townhouse model to the College Park location. They’ve also broken ground on their first row of homes, he added.

While many residents are aware that the future might affect parking and traffic, Bradford is hopeful about the new development and the benefits it poses to the community.

“We will see what goes on,” he said. “There’s no sense to get upset about it now because we don’t know what’s going on.”