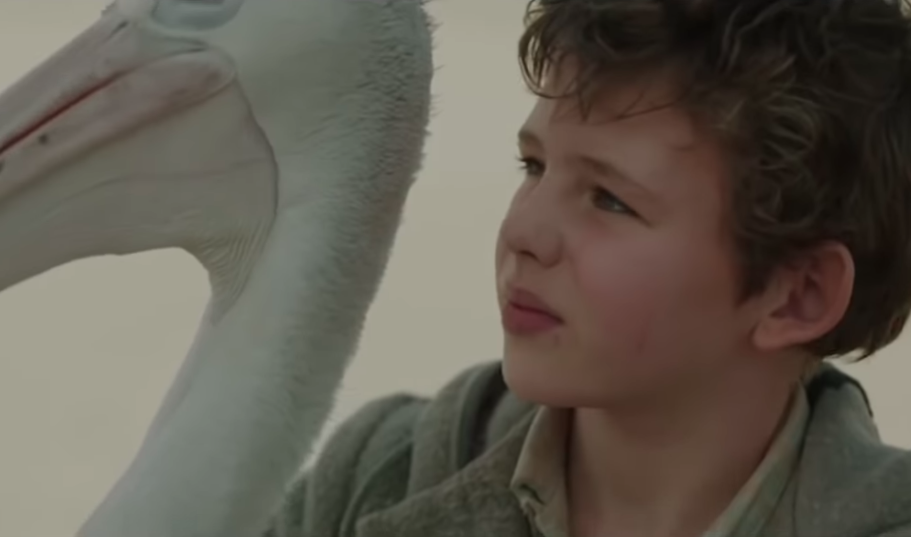 Storm Boy retells Colin Thiele’s story of a young boy’s peculiar friendship — with a pelican. The story is told through a The Notebook-style flashback in which Michael Kingley, now an old man, remembers his childhood. Unfortunately, not all aspects of the Australian classic stand the test of time.

The flashback scenes in Storm Boy display the awe and magic of Australia’s coast, as well as humanity’s connection to nature. Finn Little, who plays a young Michael Kingley, is a phenomenal actor. There’s an intense believability to his performance: The willpower a child can put into loving a pet, and the quietly real relationship a boy has with his father after the magic of childhood has passed. But, to put it frankly, the “real life” segments of this movie, where Michael is all grown up, just aren’t as good.

The flashback scenes steal all the good writing and acting this movie have to give. The adult Michael (Geoffrey Rush), now has an adolescent granddaughter, Madeline (Morgana Davies). She’s a cliche angry teenager without any of the acting skills to back it up or make it interesting.

Her script is full of lines that, which despite their melodrama, should still ring true to the pain of a teenage girl. “Mum would have been disgusted with you” is the type of thing you remember saying in anger once as a kid and later regretting forever. But when Davies delivers them, you don’t sympathize with her, you just turn against her.

Davies’ acting skills only seem weaker when contrasted with other cast members’. The equally melodramatic “This is your fault!” from young Michael is heart-wrenching in its truth of the black-and-white worlds the young live in.

I would have loved this movie if I didn’t have to hear about how Michael is apparently losing his mind as an old man and how his son-in-law hates nature in a particularly lazy bout of villainy. Dizzying transitions, meant to show Michael’s degrading memory, instead come off as a muddled mess desperately in need of better editing. In fact, the whole movie feels unfinished, from the clunky beginning to the underwhelming ending. In fact, the ending feels more like the budget ran out after a random, unexplained helicopter scene that doesn’t tie the story together.

Despite all of this, I still love the flashback scenes. Besides Finn Little’s amazing child acting, his ruggedly handsome, emotionally damaged dad is basically a supermodel who deserves more screen time. And the effects with the pelicans are (mostly) awe-inspiring, although a couple of scenes still feel scraped together.

It would be irresponsible of me to not mention Fingerbone Bill. As the only main character of color, he does play an important part, representing the indigenous Australia that colonizers want to destroy. But he also idles near a common character trope of the “Magical Negro” — trademarked by a character of color who exists to depart some sort of mystical or “native” knowledge onto the white protagonists and then spookily disappears into the mist, something Fingerbone literally does several times throughout the movie.

His character is lovely, and Trevor Jamieson does a wonderful job bringing a caring and wise man to life. But he doesn’t have the privilege of a narrative arc beyond playing assistant to a little white boy. His character in Storm Boy runs a fine line between acknowledgement of aboriginal importance and culture and an underdeveloped side character.

This film will wring your heart out. It has amazing potential and a unique story, but the individual pieces just don’t fit together. The plot is full of holes. Plenty of lines are half-assed and just thrown in there to keep the story moving forward.