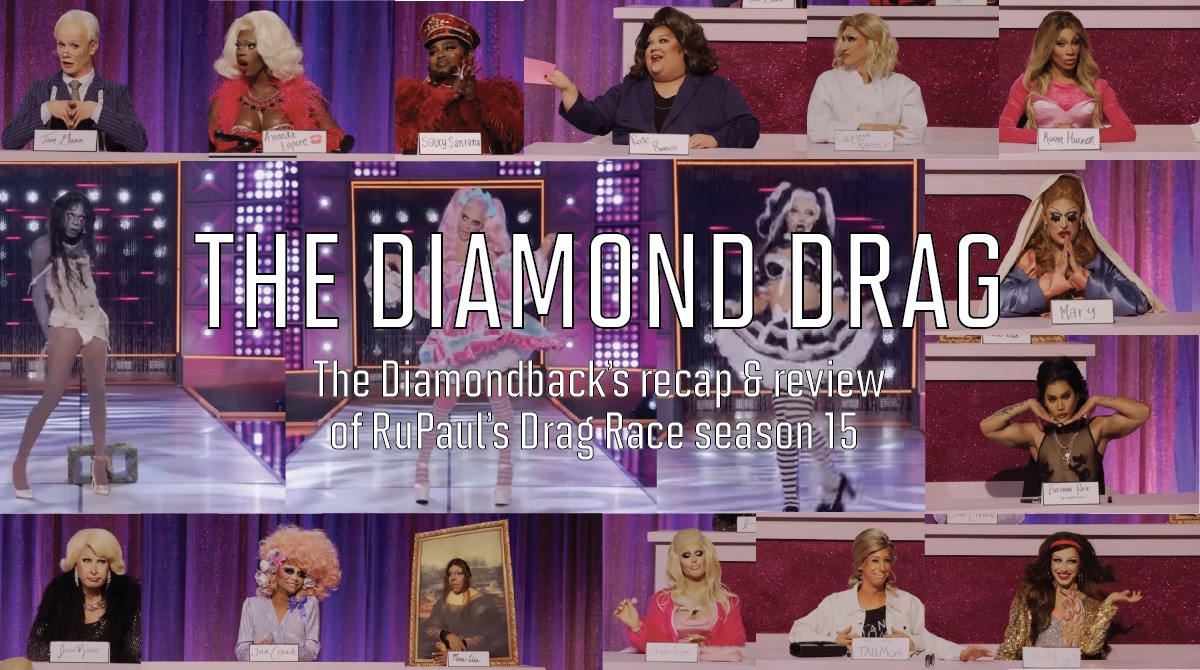 Once again, season 15 of RuPaul’s Drag Race has fallen victim to the hour-long episode, and it’s very frustrating. The worst thing about the runtime is there really is no time to connect with the queens and learn about them. I don’t feel drawn to really anyone because I don’t know a lot about any of them.

Following Princess Poppy’s elimination, the queens re-enter the Werk Room. Amethyst is feeling shook surviving her second lip sync in a row. We get the obligatory congrats to Sasha for winning last week, which I’m realizing now Anetra did not get after winning. We see a little tiff between Loosey and Luxx about who got the made-up “second place” among the top three.

The next day, the queens walk in and meet Ru. He announces this week’s maxi-challenge is the Snatch Game. The queens are understandably shocked by this because the Snatch Game is typically much later in the season. It’s the unofficial halfway mark because it’s a big hump to get over due to the challenge’s difficulty.

The Snatch Game is an annual challenge in the Drag Race franchise where queens do their best and funniest celebrity impersonation and participate in an improv-style parody of the classic game show Match Game.

Due to the large cast size, the queens would be doing the Snatch Game in two groups of seven. Ru randomly divides the group depending if they’re standing on the left or right, despite the queens originally standing in an amorphous blob.

The queens then all scatter around to their work stations and start asking the most important question of Snatch Game: Who are you going to do?

Quite honestly, everything that happened here was an annoying setup for the outcome of the whole episode. I understand reality TV has certain things it does to tell its story and it gives obvious crumbs throughout the episode, but these moments weren’t crumbs of teasers. It was a whole meal.

We head over to the Snatch Game set, and it’s time for group one. I’m going to talk about each queen one by one.

[The Diamond Drag: All Queens Go To Heaven of ‘RuPaul’s Drag Race’]

Marcia Marcia Marcia: Marcia played Tim Gunn, and I thought she killed it. I feel like with Tim Gunn, it could get one note since his thing is his particular voice and inflection, and he has a particular joke style he used on Project Runway. Marcia was able to keep it fresh and make it fun.

Luxx Noir London: Luxx played Amanda Lepore and was fine. She had maybe two answers because of the short runtime. I liked her referencing Amanda’s song “My Hair Looks Fierce.”

Malaysia Babydoll Foxx: Malaysia played Saucy Santana, and what could’ve been great was also just okay. Like Luxx, she had maybe two answers.

Mistress Isabelle Brooks: Mistress played Rosie O’Donnell and was incredibly funny. I typically worry when people do comedians for the Snatch Game because comedians tell jokes, and you can’t just tell someone else’s joke. I thought Mistress was just absolutely hilarious and really killed it.

Robin Fierce: Robin Fierce did Karen Huger. That’s all I know about her performance. Robin was basically not in this episode.

Anetra: Anetra played Gorgenia Ramsey, although I would assume she meant to spell it Ramsay. Her character was Gordon Ramsay’s sister, and it was fine. I don’t like it when queens do made-up characters, especially when they’re just a female version of a male character.

Salina EsTitties: Salena played the Virgin Mary, and it was not great. It felt too rehearsed, and it didn’t really flow well. She played Mary like a whore which is fine, but the joke is overplayed and just wasn’t great. It was the epitome of loud does not equal funny.

[The Diamond Drag: One Night Only Part One and Two of ‘RuPaul’s Drag Race’]

All in all, the best people in group one were Mistress and Marcia. We then head over to group two.

Loosey LaDuca: Loosey played Joan Rivers, and this is the moment she won me over. I love Joan so much and imitating her is no easy feat, especially considering Jimbo did Joan on the Canadian franchise’s Snatch Game and won. I’m not the biggest Loosey fan, but her performance as Joan just was everything and more.

Sasha Colby: Sasha played Jan Crouch. I don’t know who that is. Sasha said one thing the entire time.

Jax: Jax played the Mona Lisa and was good enough. It falls under the same category as what Anetra did by not portraying a living person.

Sugar: Sugar played Trisha Paytas, and I actually thought she did well. She wasn’t Loosey or Mistress good, but she was not bad. I will say she could’ve done so much more, and the impersonation felt a bit like Sugar being herself.

Amethyst: Amethyst played Tan Mom, and I thought it was really strong. This performance gave the audience a sense of who she is. It was a funny and smart choice.

Spice: Spice played Miley Cyrus, and it was rough. Nothing about it was Miley — it wasn’t funny and it just didn’t work. Her smacking herself with the hammer made me burst into laughter, but because I was laughing at her, not with her.

Aura Mayari: Aura played Bretman Rock, and she could’ve done so much more. She was just nothing like him, and it’s unfortunate because it could’ve been really strong because Bretman is a good character for the Snatch Game.

My top performer from the second group’s Snatch Game was Loosey, without a doubt.

The next day, we have a 20-second trauma dump from Loosey — another obvious sprinkle from production.

Before talking about the runway, I want to call out RuPaul’s outfit. It was so gorgeous with the black and white and the feathers.

The runway category is beautiful nightmare, and it was another incredibly strong show. Luxx and Sasha keep bringing next-level stuff, and this was no exception. I also really enjoyed Malaysia this week as well as Aura who went super above and beyond. Also, the Lady Gaga fan in me would be remiss if I did not shout out Amethyst for her Gaga look. I thought Loosey, Marcia, Sugar and Spice didn’t have the strongest looks.

The tops were Loosey, Marcia and Mistress, and the bottoms were Aura, Sugar and Spice. The second I saw Sugar and Spice in the bottom, the writing was on the wall in size 72 font bold italicized highlighted with neon signs and arrows. Loosey wins the challenge, and I completely agree.

The bottom two are jaw droppingly, shockingly, Sugar and Spice. The two lip sync to “You Better Run” by Pat Benatar. I loved this lip sync. The twins had choreographed the entire song, and it was so much fun to watch. Was it the best performance? No. Was it fun and entertaining? Yes. Spice is declared the winner of the lip sync, and Sugar is told to sashay away.

I was sad to see Sugar leave just because I really enjoyed watching the twins this season. I’m now very curious to see how Spice performs without Sugar.