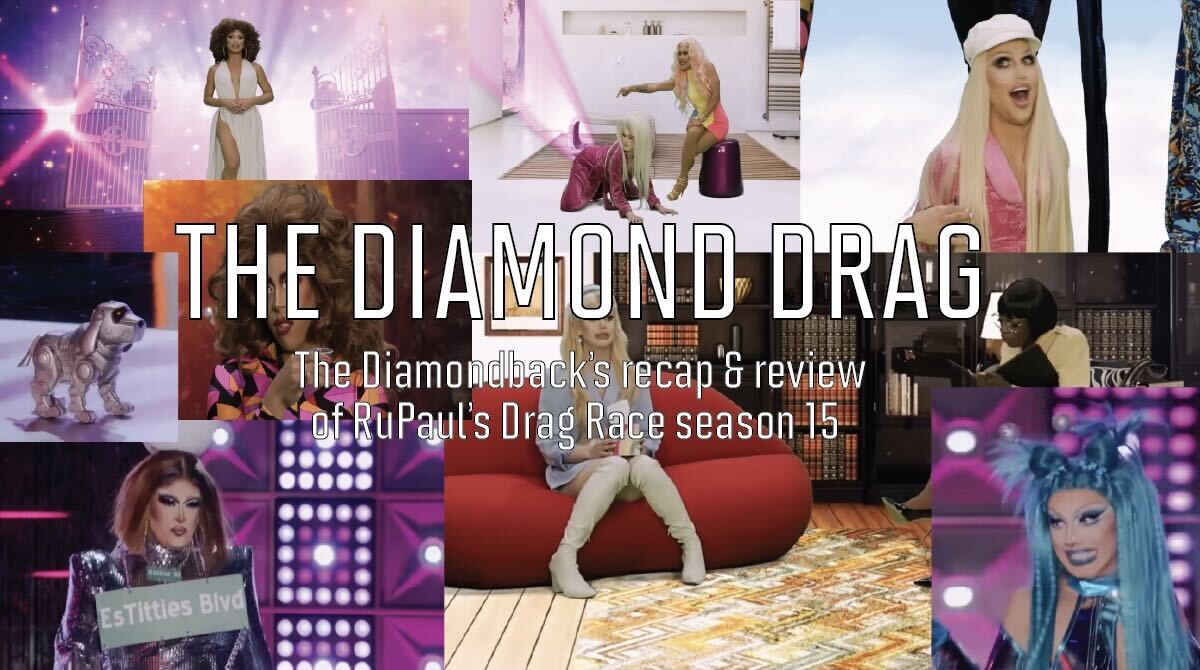 I’m not exactly sure how to approach reviewing episode three of season 15 — not because it was controversial or scandalous in any way but rather, it was so insanely short.

The past few seasons of RuPaul’s Drag Race, we got hour and a half-long episodes, but season 15 is returning to the original hour-long episode. In prior seasons, the hour runtime has been fine, but it’s because there have been less queens. It was much easier to digest and felt balanced. With 15 queens this episode, it felt impossible to digest everything.

The episode begins with the queens re-entering the Werk Room after Irene’s elimination. The queens got a good laugh from Irene’s mirror message, as did I, where she said she pooped in one of the other queen’s stations. The queens quickly pivot in conversation where Spice asks Amethyst what’s up with her and Robin Fierce’s previous connection.

We find out that they dated prior to Drag Race. This felt like a weird blip in the episode. It was just, “Oh yeah, we dated,” and then was never circled back to.

The next day the queens enter the Werk Room and RuPaul announces their challenge: commercials advertising what they think a queer afterlife will be like. Anetra and Amethyst are declared team captains for winning the challenge and lip sync respectively. Any queen not picked would be on Team Leftovers.

[The Diamond Drag: One Night Only Part One and Two of ‘RuPaul’s Drag Race’]

The teams split up and begin planning their respective concepts. Team Anetra’s big moment is when they dub Sasha Colby the role of God — understandably as she’s Sasha Colby. Sasha talks about the pressure of living up to her reputation but feels confident in her skills.

Team Amethyst has some tension as Princess Poppy and Loosey take a bit of a leadership role as they write a ton of jokes. Loosey throws out a concept of gay icons as God. For a challenge that’s about afterlife, I assumed they’d use dead gay icons but instead, they went with Dolly Parton who is very much alive.

Finally, we see Team Leftovers with the most tension. Being a viral social media star, Sugar throws out a ton of ideas but is immediately shut down by her team, specifically Jax.

We abruptly jump to commercial filming, and we see the same beat from every team: They’re all doing bad. Sasha can’t remember her lines, Amethyst’s humor isn’t landing and no one on Team Leftovers is prepared except Sugar. We literally see none of the teams having done anything successfully.

We’re back in the Werk Room the next day and as the queens get ready, they discuss their connection to religion. I watch Drag Race for many reasons, and one of them is to see these very raw and real stories being told.

Malaysia talks about being worried about what her family would think of her being in the church and being gay. She expresses she found nothing but love and support. Mistress unfortunately had the opposite experience coming from a religious family. Because the episode is so short, the queens’ trauma dumping just feels even more exploitative than normal.

We hit the runway, and the category was metallica. I thought across the board, it was a really strong runway, but because of the timeslot, I felt like if I blinked I was going to miss an outfit. That being said, I thought Sasha, Luxx, Sugar, Spice, Jax and Amethyst had some of my favorite looks, while Poppy, Malaysia and Salina had some of the weaker looks.

We watched all three commercials and quite honestly, only one group — Team Anetra — really met the mark. I loved Sasha’s neck-snap bit throughout, and I also think they had the advantage of going first because of some of the jokes we saw in every commercial. Team Leftovers had the second best but was carried by Sugar.

Team Amethyst, however … Let’s just say I’m happy I’m alive if that’s what the afterlife is like. None of the jokes landed, there was a weak throughline and the gag of Dolly Parton at the end didn’t do it for me, but I think I’m not the biggest fan of Loosey, so maybe that’s why I didn’t like it.

The tops are announced to be Sasha, Luxx and Loosey with the bottoms being Amethyst, Poppy and Jax. In my opinion, I would’ve put Salina in the top instead of Luxx or Loosey because besides Sasha, she was the best in her group. I also felt Jax was put in the bottom for story purposes because I don’t think she was the best or worst in her group. But if I’m being truly honest, I thought it should’ve been a bottom 10 and make Team Anetra all safe with one winner from that group.

Sasha Colby is announced the winner of the challenge, and I completely agree. She had the most memorable moments from the commercial. Amethyst and Princess Poppy are dubbed the bottom two and lip sync for their life to Diana Ross’ “Ain’t No Mountain High Enough.” I thought Princess Poppy won the lip sync as she was the most entertaining. I liked her comedic approach to the song, and she just entertained me more all around than Amethyst. However, making a joke out of a Diana Ross song in front of RuPaul is about as blasphemous as burning the Bible in front of the pope. I’m sure Ru did not appreciate the comedic approach to his favorite artist’s song.

Amethyst is announced the winner of the lip sync, and we unfortunately see Princess Poppy sashay away. I’m really disappointed to see Poppy leave this way as I clicked with her in episode one and because she fell victim to this shortened episode format. We unfortunately really did not get to learn a lot, if anything, about her because of the episode length.