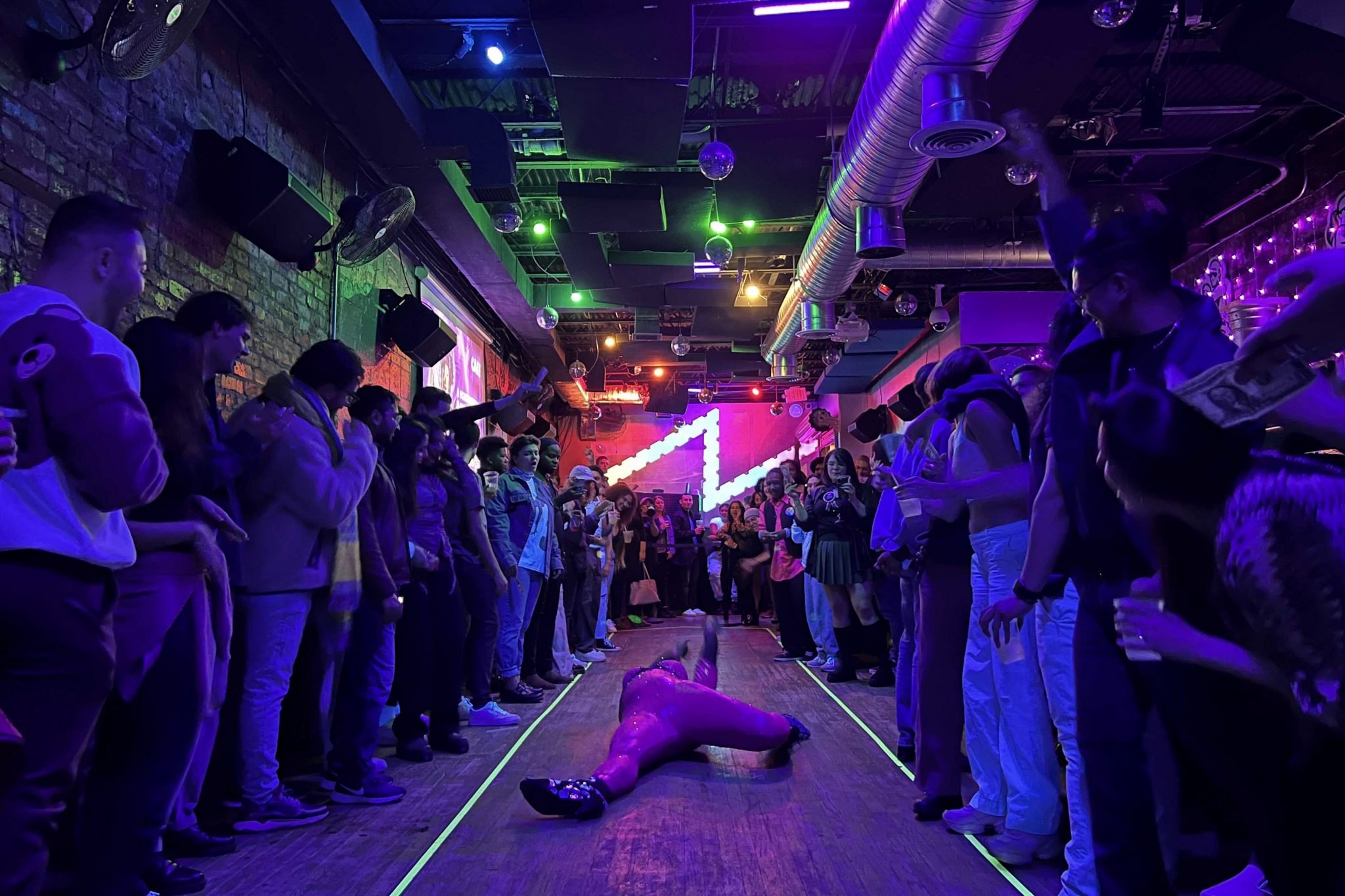 Spectators cheer on a performer at A League of Her Own, a lesbian bar in Washington, D.C., during the bar's weekly drag show on Dec. 1, 2022. (Winter Hawk/The Diamondback)

The hundreds of rhinestones scattered across performer Cake Pop’s hot pink bodysuit glistened as they caught the light of multi-colored spotlights and silver disco balls hanging from the ceiling. The crowd, only inches from Cake Pop, cheered her on and waved cash in the hopes she’d strut or dance over to them.

It’s a small price to pay for a closer look at the elaborate hair and makeup that has come to characterize drag shows.

The stage had a runway-shaped section of the floor outlined in neon tape, which attendees were cautioned not to cross as performers kicked, turned and sashayed. Toes lined the audience’s side of the tape as patrons packed themselves onto the third floor of the bar.

At the end of the stage, Cake Pop whipped around toward the open runway behind her. Throwing her arms above her head, she took two steps before jumping up, turning mid-air and landing splayed out in a jazz split.

“It’s a weird combination of different things that I like between music, dancing, everything like that,” Cake Pop said. “I like the feeling of the space and how much of a family it feels like when we’re performing with everyone.”

Cake Pop hosts the weekly drag show at A League of Her Own, commonly referred to as ALOHO, the only lesbian bar in Washington, D.C.

In 1980, there were 200 lesbian bars in the U.S. Now, there are fewer than 25. While it’s unclear why these spaces are dying out, it makes existing queer and lesbian spaces even more valuable.

“We get a lot of people that travel just to come to the bar, a lot of people from other states,” Lopez said. “They come because they want to see the space and want to experience being here.”

When traveling, Lopez also likes to find lesbian spaces. With a list of the other lesbian bars painted on a wall on the first floor of ALOHO, it’s not hard to pinpoint where they’re located. However, given their small numbers, not all queer and lesbian women can visit.

Sara Saidel, a queer junior public policy major at the University of Maryland, grew up in Kansas and hadn’t gone to a drag show or lesbian bar before last Thursday.

“There are definitely no gay bars or lesbian bars where I live … and if there are, I haven’t found them,” she said. “So to be in one of the few states where there is a lesbian bar … I definitely take advantage of that when I’m in this region as opposed to being at home.”

ALOHO doesn’t just attract bar-goers and drag queens looking for a fun and welcoming environment — the bartenders also prioritize working at an establishment where they feel represented.

The owner of ALOHO also owns Pitchers, a gay bar connected to the lesbian bar through an opening on the second floor. Miguel Monge, a bartender at Pitchers, has worked there for more than a year. Monge originally walked into the bar to get a drink after quitting his job, but he ended up walking out with a job after learning the bar was closed for open interviews.

“I’m a gay, Latino immigrant, and I worked in an environment that was very white and Republican,” Monge said. “I was someone that was in a high position … but yet, I would still get judgment or called slurs and all that, even though I was the boss.”

Despite the great salary he earned, the pay wasn’t worth the cost of experiencing inequality in the workplace. So, Monge took his energy to where he’d be surrounded by like-minded people.

“I also get to be around all kinds of people,” Monge added. “Whether that means sexual orientation, gender orientation or your ethnicity. I get to be around guys, women, everyone in between. … We all come here in order to have fun, let loose, get a little bit away from reality and just be accepted.”